According to the New York Times, G.M. has notified its Executives, Employees and Affiliates that they are no longer to refer to Chevrolet as Chevy.  Some genius there has decided that being known by two names must be confusing to consumers, so they need to present a united front and they need to be consistent!  In spite of the fact that Chevy has brand recognition that any company would kill for, they're opting for formality (in an age, as pointed out in the article, when Federal Express has adopted FedEx, Kentucky Fried Chicken has opted for KFC and Radio Shack is pushing themselves as The Shack).

It seems like a brilliant example of finding the one aspect of your company that "ain't broke" and boldly, setting out to "fix it".  If they're having difficulty selling their cars, I'd suggest that dumping an iconic name might not distract consumers from the idea that maybe a lot of them just don't care for Chevy cars right now.

As we all know, the federal government, and therefore, you and I, are pretty large shareholders in G.M. right now.  In that capacity, I'd like to remind G.M. of a few other strokes of genius from America's marketing history.

1.  Remember the 80's when somebody decided that we were all tired of brown soda?  Suddenly, every company came out with clear products...clear cola, clear beer...even clear gasoline, "because your car knows the difference".  Well nobody else did.  And a look at more recent history shows that people will buy water quicker if you add color to it.

2. McDonald's has actually rolled out more than a few flops in its time, but the McDLT may have been one of their wrongest moves. 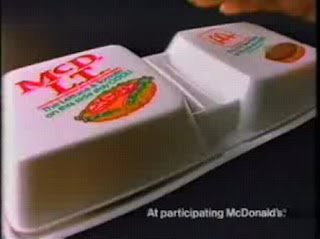 Not only did nobody give a rat's ass about keeping "the hot side hot and the cool side cool", McDonald's had also chosen the exact moment in time when the idea of responsibly ecological packaging was becoming popular to release a product with twice the styrofoam of their other offerings!
3.  Apparently, The Coca-Cola Company, hadn't experienced enough pain, so they brought back the very same guy who tried marketing New Coke to conceive another marketing fiasco for them.  He came up with OK Cola.  (He had done research and discovered that the only word with more worldwide recognition than Coke was OK)  How could it miss? 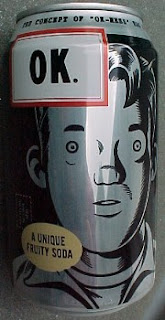 Apparently, drab packaging, and advertising that was meant to appeal to people too cool for advertising, combined with a Manifesto meant to evoke Orwell's 1984, didn't catch on. Some examples?
-What's the point of OK? Well, what's the point of anything?
-OK Soda emphatically rejects anything that is not OK, and fully supports anything that is.
- The better you understand something, the more OK it turns out to be.
-OK Soda says, "Don't be fooled into thinking there has to be a reason for everything."
-OK Soda reveals the surprising truth about people and situations.
-OK Soda does not subscribe to any religion, or endorse any political party, or do anything other than feel OK.
-There is no real secret to feeling OK.
-OK Soda may be the preferred drink of other people such as yourself.
-Never overestimate the remarkable abilities of "OK" brand soda.
-Please wake up every morning knowing that things are going to be OK.
I guess I can imagine it being anti-cool enough to sell in some Brooklyn neighborhoods, but  the other 99% of the country just didn't get it.
I will give G.M. credit for one thing, and this may be the entire point to begin with.  The article ends:

"A postscript to the memo says a sort of cuss jar — a plastic “Chevy” can — has been situated in the hallway. “Every time someone uses ‘Chevy’ rather than Chevrolet,” the note said, the employee is expected to put a quarter in the can."

Who needs to sell cars when their employees pay for the privilege of working for you!
Posted by Nathan at 10:25 AM

INTERNAL MEMO - NOT FOR PUBLIC RELEASE

Once Phase One of GM's plan is complete, and all employees have been weaned of the term "Chevy," we will begin Phase Two with the following letters to these members of the public:

Dear Mr. Don McLean: It has come to our attention that your song "American Pie" contains the line "Drove my Chevy to the levee but the levee was dry." You may not be aware that "Chevy" is not the proper name of our corporation and our products should be refered to by the brand name "Chervrolet." Please revise your song accordingly. Sincerely, GM

Dear Mr. Bruce Springsteen: It has come to our attention that your song "Racing In The Street" contains the line "I got a '69 Chevy with a 396, Fuelie heads and a Hurst on the floor." You may not be aware that "Chevy" is not the proper name of our corporation and our products should be refered to by the brand name "Chervrolet." Please revise your song accordingly. Sincerely, GM

Dear Members of Three Six Mafia: It has come to our attention that your song "Ridin' N' Tha' Chevy" contains the line "Yeah, I know what time it is, we finna do the ridin' in the Chevy." You may not be aware that "Chevy" is not the proper name of our corporation and our products should be refered to by the brand name "Chervrolet." Please revise your song accordingly. Sincerely, GM

Dear Mr. Chevy Chase: It has come to our attention

Dude! You won! GM has withdrawn the memo!

Of course I won! I had like eleventy-zillion hits from Detroit today!

I can just see it now"

"What kind of soda do you want, Pepsi?"