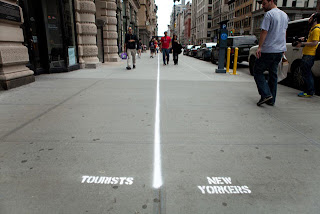 You've all heard me moan about how hard it is for us New Yorkers to just get where we're going without having to dodge a bunch of clueless, picture snapping, lost, gawking, slack-jawed, walking 5-abreast tourists!  Well, last month, it seemed that someone was doing something about it.  On a block of Fifth Avenue, next to the Flatiron Bldg., some mysterious benefactor created dedicated "Tourist" and "New Yorker" pedestrian lanes.
Sadly, the lanes disappeared as quickly as they had materialized.  And now, it can be revealed that it was all another Improv Everywhere project.  I think I love those guys!

(I'm going to need to change my layout, because this one won't show a full-frame video no matter how small a size I choose.  The video is up on the linked site if you feel like you're missing something.)


Not that I want to sound like some kind of curmudgeonly ingrate, but I'd actually favor holding pens instead of mere walking lanes.
Posted by Nathan at 12:14 PM

When I lived in Central Florida many moons ago, we had snow-bird and touron seasons. They overlapped somewhat at times and always made the local prices go up!

chilly: when it gets chilly up North, snowbirds and tourons alike flock to warmer climes...

One of the (few) great things about being in Jacksonville was that the snowbirds didn't think it was far enough south!