Before I say anything, let me just fess up:  I loathe Chase Bank.  I abhor them.  I hate them with a burning passion comparable only to something that...uh...burns really, really hot.  See?  Just the mention of them makes me completely lose all ability to come up with similes.  When I first moved to N.Y. I opened an account with Chase.  The fact that they demanded more background information to open a checking account than my previous bank in Boston had required to give me a car loan should have been a tip-off.  Once I finally decided I'd had enough, I moved my account to another bank.  Chase bought that bank three weeks later.  I moved again.  That one remained independent for almost 6 months before Chase assimilated them.  Resistance is FUTILE!  Now, I'm at CitiBank, and I'm actually mostly happy with them.

But that's all neither here nor there.  I just wanted to admit that I'm not fond of Chase to begin with.  They've got a commercial on the air right now that really bugs me. The intent of the ad is to let you know about some new service that gives you a 3% refund(?), discount(?) on things you buy with your Chase Debit Card.  I haven't paid close enough attention to know the details, but, hey...that sounds like a fine thing.

But to make their point, they show a couple of brothers(?) who are constantly racing to see who gets to pay for stuff and therefore qualify for the cashback reward.  Brother #1 is constantly shown at the cashier when brother #2 swoops into frame and swipes his card through the reader before the guy actually buying stuff can pay for it.  SCORE! Brother #2 is always the one getting the 3% reward "on stuff you buy anyway"!

Except it's not stuff brother #2 is buying for himself.  He's picking up the tab for brother #1.  The real winner here isn't brother #2 who gets the 3% reward...it's brother #1 who is apparently getting 100% of everything he buys paid for by his idiot sibling.

Maybe the fact that the theme music from Deliverance is playing in the background should have been a clue that the commercial involves questionable breeding practices. 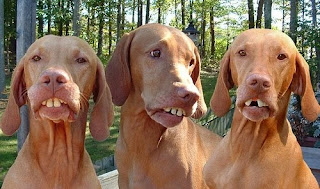 And his other brother Cletus, too!

They are NOT Cletus. They're Larry and Daryl and Daryl.