Music In The Park? We Shall See. 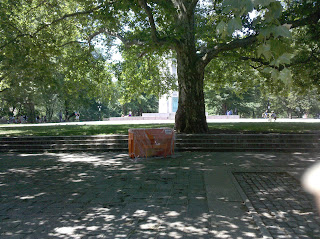 Has someone discarded a piano in the middle of Ft. Greene Park? 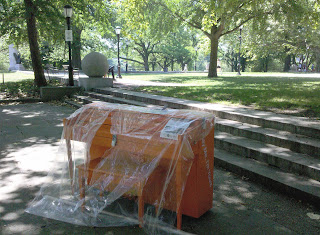 Is it there on purpose perhaps? 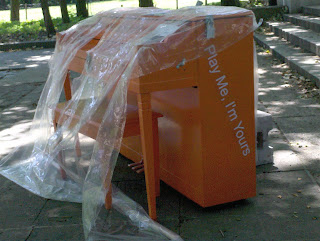 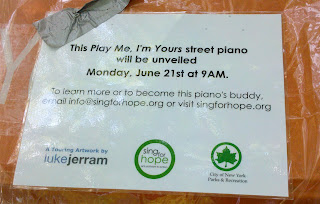 From Monday, June 21st until July 5th, there are going to be 60 pianos in various parks, streets and plazas all over NYC.  Prior to delivery (which I'm guessing happened this morning), a bunch of people painted them.  They were all donated from various places, many of them previously derelict and in need of servicing.
Anyway, each piano will have volunteer "Piano Buddies" hanging out with them to make sure they don't get beat to crap or disappear. (I'm told that they're also loaded down with cinderblocks to make them harder to walk off with.)  And anyone who wants to is invited to sit down and tickle the ivories.  There are actually two of them in Ft. Greene Park!  Aren't we special?
And apparently, this will be going on simultaneously in London.
I'll venture over once they're open to the public and get you some video of people playing -- for better (I hope), or worse, (I fear).  And while we're on the subject, I sincerely hope none of that alleged American anti-Brit spillover from the BP, uh...spill over, uh...spills over to this.  Not that there's such a thing as an American who has trouble figuring out appropriate targets for their protests. (That last was sarcasm, if you missed it.)
P.S.  There are a few things that have me particularly annoyed today, so I'll probably be back with more later.  But don't expect any pleasantries.

UPDATE:  I'll be holding off until tomorrow or Monday for the rants.  It's too nice of a day to let myself get all (further) annoyed.
Posted by Nathan at 1:16 PM

They had them in Bristol last year, and I remember seeing a damaged one. I've just had a quick look on the internet and it said that until it came to Bristol only two had been damaged before, one in London and one in Sydney. While it was in Bristol at least three were damaged which is a shame, I remember walking past parks hearing people play. Perhaps after the bad experience in Bristol they are having the "Piano Buddies" as I don't think they had them in Bristol. I hope that they ones in New York and London this year stay undamaged and that you get to hear some nice playing.

If the people won't come to the music...take the music to the people. Grand idea.

Hope they do something like that in Atlanta one day.