I Think I'll Just Skip The Meal And Go Straight To Dessert.

Last week, I told you about Stieg Larsson's series of books.  I'm about 2/3rds of the way through the third book and my opinion hasn't changed a bit -- I still think they're pretty terrific.  But I'd be dishonest if I didn't mention one little quibble I've got with these books.

Here's the thing.  When it comes to food, I'm highly suggestible.  No, really!  It's ridiculous how easy it is to make me want to eat something if you describe it or show it in a way that makes it sound or look appetizing. You know how some people will do something stupid over and over and over again, like pulling really hard on a door may look like its really heavy but it isn't?  And every time they open that door, it swings open really easily and smashes them in the face? And no matter how much they tell themselves they won't do it again, they still do the same damned thing the very next day!

Well, you know what?  I've eaten a Burger King Whopper.  I know it tastes pretty good until I'm about half-way through one -- and then it doesn't taste so great.  And then I get a little bit -- Urpey! And I swear I'm never going to eat one of those things again.  And every time GF and I drive down the Garden State Parkway, we end up stopping at the Cheesequake Rest Area (don't you love that name?) and, sure enough, I order a Whopper.  I know better but somehow I can't help myself.  I'm an idiot.  I'm easily suggestible.

The same thing happens when I'm reading.  Lots of authors take pride in including a bunch of meals in their stories.  And, assuming it's not one of the Hannibal Lechter novels, the food usually sounds pretty good.  Sometimes, I'll even run out and buy the right ingredients and make something for dinner that I've just read about.

Mr. Larsson's books have not had that effect on me.

I'll remind you that the books take place in Sweden.  Before you get the wrong idea, there are no scenes that have the characters eating lutefisk.  If you're not familiar with lutefisk, this is a preparation of cod or some other whitefish in which the fish is dried and saved in that condition for a decade or two.  A week or two before you want to eat lutefisk, you start a series of baths to reconstitute your dessicated fish.  The baths alternate cold water and lye.  Apparently, you have to be kind of careful with the lye bath portion of the process to avoid turning it into soap or just poisoning your dinner guests.  Anyway, the stuff comes out as an unrecognizable gelatinous glop that no-one will touch with a ten foot fork before the age of 65.  There is a further unsolved mystery involved since the elders will always try to coax children into trying it by saying they, themselves loved it when they were children -- which is a vicious lie since no-one under the age of 65 has ever been witnessed trying the stuff. 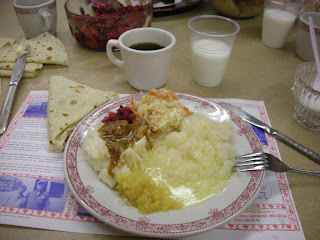 Yum!  Doesn't that look good?
Anyway, there's no lutefisk in the book at all, since apparently, more lutefisk is consumed in in Minnesota and Wisconsin (in the name of Scandinavian Heritage), than is currently consumed in all of Scandinavia.  (Note to those celebrating their Scandinavian Heritage -- the people who stayed behind in the old country have discovered REFRIGERATION and they no longer have to eat that stuff.)

No, here's the thing.  Nobody in this book seems to give a rat's ass about food.  One character seems to live solely on "Billy's Frozen Pizzas".  There's a little bit of beer in the book, but otherwise, nobody seems to drink anything but coffee.  And another main character eats sandwiches at every meal.

Most of the time, that's as far as the description goes -- Blomkvist realized he hadn't eaten in three days, so he had some sandwiches and coffee.  On the few occasions that the sandwiches are more clearly described -- let's just say Yuck!  Do. Not. Want.


While some of these don't actually sound completely disgusting, none of them inspire any sudden cravings.  Maybe they're murder mysteries and dieting handbooks!
Posted by Nathan at 4:08 PM

Well, that explains the stinky tofu.

That didn't have the first thing to do with suggestibility. That was about childishly demonstrating the depths I'm willing to stoop to in order to demonstrate my masculinity. You know -- by eating disgusting stuff when a dare was issued.

How could you not get that?

Yeah, I NEVER suggested to Nathan the stinky tofu was anything but utterly horrible.

-sandwiches with pickled herring in mustard sauce with chives and egg.


I would go for that.

If you had ever been in my will, you'd be out of it now.

Nathan, Konstantin is Russian. If you saw some of the shit he had to eat in the USSR, you'd be more understanding. :D

When are you up for another trip to Flushing. We can grab some goat-on-a-stick and then find something *interesting* to eat...

Someone else's ill-choice of birthplace does nothing to require my "understanding".

And John, allow me to get my stomach back to "eating normal stuff" before I venture out to Flushing for "adventurous".