Stieg Larsson And One More Reason To Love My Nook™

Let's start by admitting that I'm often way behind the curve when it comes to discovering things that everyone else seems to be raving about.  And while we're at it, I may as well cop to the fact that I may be a wee bit provincial (or is it parochial?) in my attitudes.  I don't mean that in a strictly pejorative sense; I'm willing to cut myself some slack and rationalize that if I'm incapable of keeping up with the "latest and greatest" (or at least trendiest) stuff America has to offer, I'm not likely to be keeping up with what's leaking in from other random corners of the Earth.

Anyway, the other night, I had just finished reading Gil's All Fright Diner by A. Lee Martinez* (one from the massive pile of books I received from Michelle when she recently decided she needed more room on her shelves -- or floor -- or under the bed?) and decided I needed something else to read.  I started randomly clicking on various book sites around the web and found myself looking at a page raving about The Girl Who Kicked The Hornet's Nest by Stieg Larson. 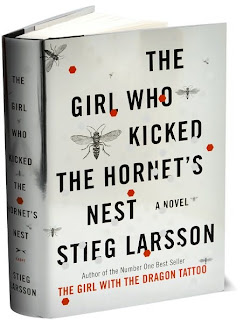 Now, here's the thing.  I still love lazily browsing through a bookstore, but if I'd had to wait until my next visit to one, odds are that I would have forgotten about this series -- I get distracted by all of the other shiny covers calling out to me.  I'm sure I would have found something else that I'd have enjoyed, but I'd probably still be ignorant of Stieg Larsson's series.  Luckily, I was in the mood for some instant gratification, went directly to B.N.'s online store, and downloaded the first book in the series to my Nook™. 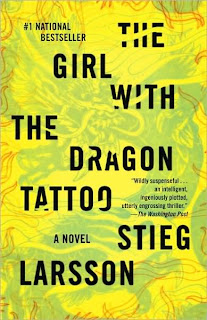 The ability to start a book five minutes after I discover its existence is one of my favorite things about my Nook™.  So I dug right into the first 32 pages.  I'll remind you that I had decided to read this book with very little prior information, so I didn't have much in the way of preconceived notions either.  It took me a little while to even realize I was reading a translation of a book written by a Swedish author about events taking place in Sweden! (I assumed it was a UK author writing about a story in the UK -- Hey, a Brit could get mysterious mail from Stockholm as a plot point!)  I got myself hooked pretty quickly, figured out where the story was happening and made a little detour to Wikipedia to find out a little about the author. (Larsson's real story, filled as it is with having lived under threats from skinheads, a tragic death weeks before his first book was published, and fights among his remaining family over his will, makes for reading that competes with his fiction.)

Without telling you too much of the story, I'll clue you in that the book centers on a 36 year old murder case, a wealthy family patriarch and his utterly dysfunctional clan, plus some petty (and not so petty) battles in the world of print and broadcast news.  Oh, and then there's that ass-kicking waif I mentioned.  Lisbeth Salander is presented as the utter outcast just trying to exist on her own narrowly-drawn terms. You find yourself rooting for her long before you have any real understanding of her, wishing she'd speak up for herself just once -- punching doesn't count.  (I tend to read without any great effort to uncover information before the author decides to reveal things on his own, so I had accepted this character without trying to define her particular psychopathology -- her diagnosis mentioned only one time -- more than halfway through the book.)

Ultimately, there are three or four stories going on at once, each of which might normally be the only one getting any real attention.  Larsson gives each, in turn, his full attention, wrapping things up admirably while only leaving you hanging enough to want the next book.  Few of the characters are minor characters -- everyone is fleshed out enough to make you feel like the main protagonists are encountering real, three-dimensional people who have reasons to exist beyond showing up just long enough to deliver some vital clue or influence some plot twist.

I said before that I like "best-selling" books, but that's only partially true. Sometimes, authors are "best-selling" just because they manage to connect with the lowest common denominator or pick up where a better author left off -- I'm looking at you Dan Brown and you Jeff Shaara!  Larsson's Millenium Series** is really good and deserves the notoriety its getting.

If you've been reading this wondering if I've been living under a rock or something that I managed to miss these books until now, congratulations, you're better at knowing about stuff than I am (and why didn't you clue me in?).  If, somehow, you're as behind the curve as I am, go pick up these books now.  You can thank me later.

** At the time of Larsson's death, he left a partial manuscript for a fourth book and a synopsis for at least a fifth.  Here's hoping that someone finishes those books and does them justice.
Posted by Nathan at 10:21 AM

Nathan, your post struck a chord with me. I just got back from getting my scalp trimmed, which was at a mall with an AMC Theater, where I remember seeing a partial title, "the Girl with the Dr..." Could it be? Yup! IMDB shows "Män som hatar kvinnor" at that theater, which is the original version (I guess it's the Swedish language version) of "The Girl with the Dragon Tattoo." IMDB also has an English language remake scheduled for 2012, probably starring Danial Craig, and rumored to have George Clooney, too.

So it looks to me like you're right on the curve. And you're ahead of me. No clue, here, at least until you clued me in. Thanks.

One of these days, I'm going to read something really fantastic and totally unknown, so I can buy the movie rights for 50¢. Discovering a book when there's already a movie in the works with George Clooney and Daniel Craig hardly rates as being timely.