Does This Post Get Filed Under My (Apparent) Obsession With Garbage, Or Is It Another Post About Neighborly Douche-i-ness?

You know that little search window up in the left-hand corner of the blog?  If you do a search for garbage, trash, rubbish, or recycling, you'll find an inordinate number of posts that might indicate something of an obsession on my part.  I maintain that you'd be wrong; the amount of attention I'm forced to devote to garbage is entirely a byproduct of my glamorous career, and the fact that the NYC Department of Sanitation has its own police force. 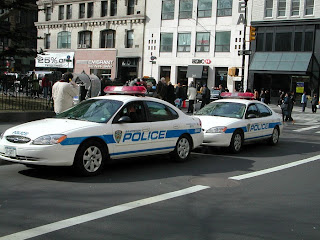 The Sanitation Cops have pretty much the same authority as any other cops including the authority to issue citations, make arrests, and to be armed.  They are authorized the use of deadly force! OK, they're not allowed to just run around shooting people any more than any other cop, but still!
More often than not, they're driving around a block or two ahead of the streetsweepers ticketing cars that haven't moved.  But they also run around looking for people who aren't recycling properly -- I know that my neighbor on one side (the good one), got a $50 ticket because school kids threw empty soda cans in his trash sometime between the time he had put his trash out at the curb and the time the garbage trucks showed up to collect it.
And you may recall that I had issues with neighborhood hooligans (hey, when you get chance to call someone a hooligan, you should take it!) had set fire to our trash cans twice in one month.  Being concerned about my trash cans burning down does not count as an obsession.  (My threat to put out a surveillance camera might have been edging into that territory, but I got over it.)
Anyway, people on my block are supposed to put out trash and recycling on Thursday nights.  So, last night, I go out to put our two trash cans, one bottles/metal recycling can, and one paper recycling can out at the curb.  Earlier in the day, I had taken a bag of trash out from the kitchen, and, at that time, none of our cans were more than half full.  When I went out in the evening, all four cans were overflowing.  And when I looked a little closer, I realized that it was all a really nasty mess of trash, bottles and paper all mixed together.
So, like a dutiful resident (who didn't want a $50 ticket for each bag of mixed stuff), I started separating everything.  Yes, I was pissed off.  And as I'm separating everything, I discover mail addressed to the 4th floor tenant next door!  Of course, after I finished dealing with the shit-piles, I presented the evidence to the owner next door.  She said she'd speak to her tenant, but even knowing that was probably as much as I could expect, it wasn't really terribly satisfying. (Is it really asking too much to want her to go out, apply for a gun permit, get turned down, get a new job in a "high-risk" field, re-apply, get her permit, go buy a pistol, spend time on the shooting range getting used to the thing, and then going upstairs in her building to give her tenant a real talking to? I don't think so!)
So, then, this morning, I looked out the window again (before any stuff had been collected), and sure enough, there's more crap out there, all of it completely mixed up and tossed into any damned can.  I was a little less conscientious about separating the stuff this time around, but I did move it to the cans where most of the contents belonged.
So far, our trash and paper recycling have been picked up without incident.  The bottles and cans are still awaiting their destiny.  There's at least one bag out there that could still get me a ticket.  I'm actually hoping I get one so I can take it next door and give it to them.
And just to reiterate how I really, really, really don't have an obsession with garbage -- it's not that I mind following the the Dept. of Sanitation rules, it's that I hate having to deal with my neighbor's nasty shit.  Next week, if I find stuff that I don't think came from our building, I'm going through the bags again -- and if I find evidence, I'm dumping it all back on their front porch.  See?  That's not the least bit obsessive. 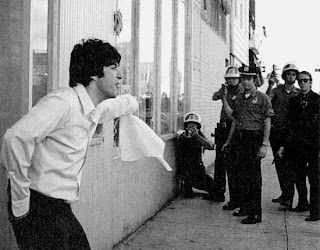 Seems to me this ISN'T a garbage post. It's a post about Sanitation regulations and your asshole neighbors!

The surveilance camera idea sounds good. Catch them in the act, then send it to the Sanitation Dept so they can deal with the neighbors!

Wow. I consider myself lucky.

Here in the Seattle burbs, the worst we have to worry about is dogs or raccoons knocking over our garbage can in the night before pickup.

Nothing like walking out the door in the morning on the way to work to see your trash strewn all over the street and driveway.

If you find evidence pointing to the repeat stupido from the 4th floor next door, don't stop at just decorating the stoop.

Ring their bell, when they answer say you have a delivery for them, and deliver their garbage back to them. Politely explain they must have mislaid those bags in your cans and you wanted to return it to them...because you know they wouldn't dare put unseparated recycles in with the someone elses trash and risk the wrath of the Sanitation Police!!

Or ring their landlord's bell and hand it to them to deal with their stupid tenants.

Wendy, that tenant is actually in the process of moving out -- which is one reason they have A.) so much trash going out, and B.) such easily identifiable garbage.

Even if they don't get the message from their landlord and clean up their act (hopefully into their own cans), the landlord has to use the same front door that they do. I'm sticking with the nasty, yet less (directly) confrontational response. OTOH, I'd love to see the conversation when they try to get a couple of cops from the Precinct to dust the bags for fingerprints. BWAHAHAHAHAHAHAHA!