Earlier today, I was thinking about something I wanted to post about.  It involves Directors of Photography...which we in America abbreviate to D.P.  Our Canadian brethren abbreviate it to D.O.P.  Can't be leaving out the of, I suppose.  Only, the whole idea behind abbreviations and acronyms is to...well...abbreviate.  To make things shorter.  To reduce the necessary syllables.  Canada...you're doing it wrong.  Or, at least, not right enough.

I'll post my thing about D.P.'s when I get around to it.  Hint:  Some of them are a right pain in the ass!

Other stuff?  I considered staying up last night to see the lunar eclipse.  Since it wasn't going to be complete here until about 3:30am, I decided against it.  Now, as you know, last night's eclipse involved a ridiculous number of things all happening simultaneously that rarely happen simultaneously.  A full moon.  The winter solstice.  An eclipse. All occurring at once.  Well guess what?  Two other things happened at once.  At roughly 2:45am, I woke up having to pee.  And the moon was clearly visible right there outside of my bathroom window!  How's that for a dose of serendipity?

More stuff? I ran across this picture today and found it entertaining.  Kinda makes me glad I never really considered a career as a wildlife photographer. 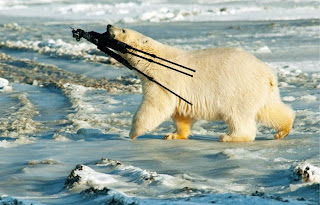 Also,  in case you didn't know it, there's a new Terry Pratchett book out there! 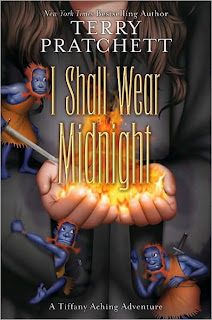 In this one, Tiffany Aching and the Nac Mac Feegle pay a visit to Ankh-Morpork!  If any of that means anything to you, you'll be rushing out to get hold of this book.  If not...then you won't.  Nuff Sed.

I also downloaded the Nook App for my Droid.  In addition to being really, really cool...it can automatically sync itself to my actual Nook.  So, if I read a bunch of pages on my Nook and then later, want to read some more on my phone, it'll automatically figure out what page I'm up to.  I may be easily impressed, but how cool is that?

Oh, it's cool AS HELL. My Kindle and Kindle app do the same thing. This makes me far happier than it should when I'm forced to attend those boring conferences and instead spend the sessions reading Christopher Moore's vampire trilogy on my Blackberry.