I'm back in Brooklyn after spending the weekend in Western New York searching for various locations with snow.  Here are a few pictures just to give you an idea what it looks like near Binghamton at the moment. 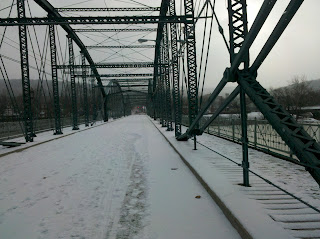 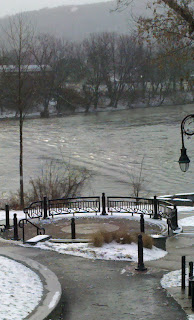 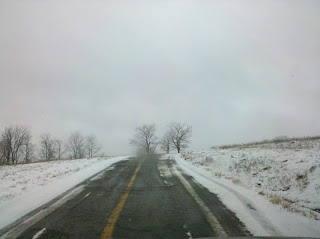 There! Don't you all feel like I was working for you?

And here are a few really quick observations.

In the middle of shooting the first location I went to, I discovered that my camera's battery no longer holds a charge.  Quelle Catastrophe! No worries...I just shot everything else with my phone.  And it turns out that my phone actually shoots as nicely as my camera -- maybe even better.  There are two problems.  I usually "dumb down" my camera to a lower resolution since I'm usually posting files online instead of printing anything.  Larger resolution pictures don't really show up that way on the website and higher resolution pictures just take longer to upload.  I can't find a way to "dumb down" my phone's camera.  Each shot is about 1.5 MB and they're 2592 X 1936.  The stitched together pans are ridiculous! Also, it's customary to include one shot of a location with a compass in the shot to show people what direction things are in -- D.P.'s want to know where the sun will be during the day.  My compass is an App on my phone.  Kinda hard to shoot a pic of your phone with your phone when there aren't any mirrors handy.

Enterprise gave me a KIA Soul to drive...which is a little baby SUV.  It's pretty fun to drive,  but every time I pulled into a gas station, I ended up pulling too far past the pumps.  You kinda expect the rear of the car to be further from you than it actually is. 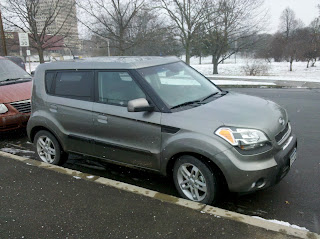 I don't know why I'm always surprised when Google tells me a trip will take 3 hours and 19 minutes -- and it actually takes 4-1/2 or 5 hours to drive it.
If NYC is supposed to be such a great place, why do all of the radio stations suck so bad until you get 50 miles away from it?  Except for the stations that switch to an ALL CHRISTMAS format for the entire month of December.  I'm betting there's a high incidence of suicides among DJ's for those stations.
I've never listened long enough to get the guy's name, but there's one Evangelical broadcaster who sounds exactly like Al Franken.  Every time I land on a station and hear him, I end up listening for 5 or 10 minutes.  I know there won't be one, but I keep waiting for the punchline.
And I can't think of anything that'll get me to change the station faster than hearing the announcer say, "After the news, we'll be back with ONE SOLID HOUR of The King of Polka!"
Posted by Nathan at 9:04 AM