And don't forget to tune in to Dick Clark's New Years Rockin' Eve, where Dick will be celebrating the first year where his full powers of immortality have finally kicked in! 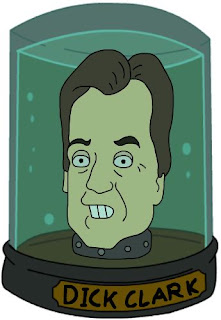 Some of the features his 'deal-with-the-devil' will allow him to bring to you this evening will be:


-An advanced In Memorium telling us which celebrities will die during 2011.

-A magical moment (actually 10 minutes) when every other broadcast and cable outlet will mysteriously go off the air shortly before midnight!

-The revelation of his Manifesto for World Media Domination! (Preview: Fox News will be switching to an "All Hip Hop - All The Time" format!)

-The sight of Ryan Seacrest's lips suddenly fused together!

-Dick's announcement that Times Square is seceding from NY City and State. The borders (8th avenue to 6th Avenue and 40th Street to 52nd Street) will be manned by resurrected teenyboppers and

boy bands under the able leadership of the ghost of Buddy Holly. And Justin Bieber's gonna be one of his first Cabinet announcements!

-And for the piece de resistance, contrary to prior announcements, Snooki will be dropped from the top of One Times Square -- just not in the ball.