An Open Letter to David Weber. 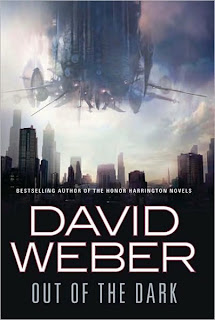 A few days ago, I finished reading Out of the Dark.  This is the spot where I'm supposed to start frothing at the mouth and demanding that you refund my money, forthwith!  I'm not gonna do that.  I'm an adherent to the philosophy You pays yer money; You take yer chances. But, really...Vampires?  Are you fucking serious?  Fucking Vampires?


Allow me to digress a moment.  I'm a fan.  I'm not going to count, but I'd guess I've read 90% of the books you've written.  And I buy them.  Probably 50% in the hardback editions.  I'm looking at a bunch of them on my shelf right now.  I'm not trying to say you owe me or anything...but I have been a fairly supportive reader over the years.  And I've enjoyed your stuff.  Really.  But...Vampires?  Fucking Vampires?


There will also be pages and pages and pages and pages giving detailed descriptions of created political interactions, descriptions of weaponry, descriptions of imagined future-tech...well, frankly, a bit more than I care for.  That's fine.  It's what you're into and it's what I suspect a great many of your fans are into.  I, on the other hand, tend to skip over the 3-page interludes that plumb the depths of all possible minutiae about how many grains a projectile is and how many foot/tons of energy it exerts after leaving a weapon with a certain muzzle velocity and has to travel 1500 yards with a specific windage and elevation to be accounted for.  ( I probably used some of those terms incorrectly, but I'm perfectly happy to read a description that says, "the brandy-new XT21-R variant of the sea-deployed RamTech Cannon was capable of firing a schoolbus-sized projectile over 36 miles and landing within 20 meters of its intended target.")  But that's just me.  Like I said, you and many of your fans are into that stuff, so I can skim a few pages to get back to the stuff I like.  No big whoop. I suppose I can be thankful that I didn't have to skim a 12-page treatise on various vampire mythologies.


And I've also read (and enjoyed) more than a few vampire stories.  It's not the vampires themselves that offend me.  It's that I got 391 pages into a 407 page book and found out -- out of nowhere -- that fucking vampires save the Human Race!  This pissed me off.


Now, I suppose I can blame myself for never having read the original story this book is based on.  But I'm not a huge fan of short fiction, so I never crossed paths with it before.  My bad.


And I suppose I could have read the review that was right there on the Barnes & Noble page that would have told me about the vampires.  But I tend to avoid reading too much about a book before buying it.  I like being surprised...usually.  I only read the synopsis that said:


In the stunning launch of a new military-SF series, DAVID WEBER tells the tale of humanity’s near extinction by hostile aliens and of the surprising alliance that fights back.

Hey, I thought;  A new David Weber book, military SF, hostile aliens...sounds good to me!  And I bought it.  And I read it.  And then...fucking vampires showed up and saved the human race!  Have I mentioned that this pissed me off?

Look, I've already acknowledged...you don't owe me anything. You don't owe me any more Honor Harrington books.  You're free to take up romantic comedy set in the rain forest if you want.  Write a few non-fiction books about worm castings if that floats your boat.  But when I pick up a David Weber book that purports to be military SF, I want aliens to be aliens, and the cats to have six legs and the weapons to go BOOOOOOM, and...well, you get the picture.  I don't want the humans to be un-fucking-dead.  Unless, maybe, they start out that way.  In other words, I might be OK with a whole book of vampires battling aliens; just not one where they're the surprise saviors of humanity.

What annoys me even more -- if that's possible -- is that there were other potential candidates for the surprise alliance.  Maybe one of the other Hegemony races could have shown up to chip in.  Maybe, despite their pacifism, they might have decided that the Shongairi were a greater threat to the Universe than the Humans.  Maybe some of the Shogairi could have defected to Humanity's side.  There were hints dropped that some of them might not have liked their spots in the pack's pecking order.  Maybe you could have alluded to some latent telepathy in the Shongairi and that litter of puppies that were born in the book could have absorbed Shongairi intelligence by some weird osmosis.  Even that would have been more satisfying than fucking vampires!

I know...if I want to suggest alternative story-lines, why don't I write my own fucking book?  Point taken.  So I 'll just go back to whining about the book you wrote without any more helpful suggestions.

So, while we're on the subject...one of the bits of evidence the Shongairi noted proving the backwardness of humans was the fact that they were still so dependent on fossil fuels in spite of having developed nuclear technology.  So why, for Godssake do the Shongairi's vehicles burn so satisfyingly when missiles hit their fuel tanks?  What the hell are they burning in there?

The big tip off should have been that this isn't a BAEN book (Mr. Weber's normal publisher). It's something completely (or for him completely) different.

But, yeah, a story lives in the reader once it leaves the writer's head. How that reader reacts *is* the story. Sorry you didn't like it.

As I noted in other threads, I was as disappointed as you are at this turn of events. Weber took a cheap and LAZY shot at his fans with this one. While we expect to think and expect the unexpected in his writing, Weber has never been a lazy writer, going along with the flow because everyone else is doing it. Until now that is.

Mr. Weber, should you ever read this, we are extremely disappointed in the direction your writing has taken with this latest book. Horrified would probably be better word. And we'll think twice before we buy your books in the future.