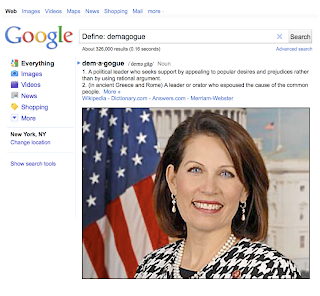 I'll have plenty more to say about Michele Bachmann in the future, but for the moment, I just want to go on the record saying that there's nobody in American politics I loath more than this woman.  She's been occasionally portrayed as Sarah-Palin-Lite, but that's not really accurate.  Palin is, at heart, just an opportunist.  Bachmann is a True Believer. And in her quest to remake America into the Theocracy she honestly believes the Founders envisioned, there is no lie; there is no slur; there is no misrepresentation she won't employ.

I've been searching for a historical comparison and I keep gravitating toward Sen. Joseph McCarthy, but I'm convinced he'll eventually stack up as nothing but a piker in her shadow.

Updated to add:  Here are some links to a few articles you might want to look at.

An older article linked in Taibbi's: The Chosen One, a 2006 article by G.R. Anderson, Jr. in Minneapolis City Pages.

Bachmann's Unrivaled Extremism, by Michelle Goldberg on The Daily Beast.
Posted by Nathan at 9:48 PM

Yeah, this is the woman who told Fox News "Well what I want them to know is just like, John Wayne was from Waterloo, Iowa. That's the kind of spirit that I have, too"

Except it's serial killer John Wayne Gacy who's from Waterloo. John Wayne was born in Winterset, Iowa.

She is representative of all that's wrong the current incarnation of the GOP. But sadly, I don't think she's any more dangerous than say, Texas Gov. Rick Perry, or Newt Gingrich, or Ron Paul (although his desire to decriminalize marijuana and have us leave Afghanistan are evidence that his brain still has a few cells firing normally.)

I beg to differ. If Perry, Gingrich, Paul and Bachmann were all dogs that bite, Bachmann would be the one with rabies.

I agree, Nathan. True Believers are immune to truth or rational thought, and there's no means so bad they won't use it to achieve their ends.

Nathan, did you read Matt Taibbi's piece on her in the current Rolling Stone? Take a Xanax first.

I'm in the middle of that one. The other stuff I've read is scary enough.