I Was Born With A Plastic Spork In My Mouth. 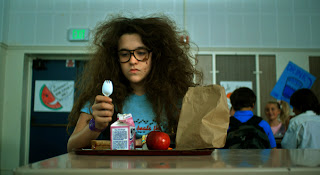 Note: This is a screenshot from the movie Spork, which sounds weirdly fantastic.
Elsewhere around the Blogsmos™, some Production Blogs have been talking a bit about long hours, Silver Spoons, and Cell Phones.  What follows, is my shameless attempt to appear to be inspired. I may have touched upon some of this stuff before, but gimme a break...at least I've never published a complete rerun before!

No matter where you are in your film career, you'll face long hours.  The only difference as time goes by is how you react to them. I used to negotiate my deal to include an absolutely ludicrous rate of pay after working 16 hours.  The fact is, I wasn't doing it to be greedy.  I mean, yeah, I'd take the money if I had to work that long, but my my main point was to discourage Production Managers from keeping me there.  I like to go home.

As I mentioned on Michael's Blog, I got my start working in a Lighting and Grip Rental House, and they had to kick me out of the place every night when they wanted to lock up.  I loved being around all that stuff and a bunch of people who could spend hours trading war stories.  As I also mentioned, it didn't hurt that the place was pretty much fueled by beer after a certain hour every day.  To this day, I honestly have no idea how the boss decided when I had gone off payroll for the day and had transitioned into merely "hanging around" (while continuing to put lights on trucks).  And in hindsight, if anybody reading this ever found an empty Heineken bottle instead of a 5k bulb in your order, you have my humblest apology.  I promise not to do it again.

Part, the Second (which will morph directly into Part, the Third).

Silver Spoon is another term for Political Hires...people who get the gig because they know somebody.  Those of us who got our first jobs the old fashioned way, (because somebody else called in sick and/or by moving an A.D.'s furniture for him), resent the hell out of people who get the job just because they know somebody.  The fact that we're all equally useless on our first jobs makes no difference whatsoever. The fact that most (but assuredly not all) Silver Spoons fall by the wayside fairly quickly is also no consolation.  The fact that I could probably list hundreds of Silver Spoons for you who went on to highly successful careers is also beside the point.  The point is that when you're starting out, there are very few people you can resent and lord it over, so Silver Spoons fill an important niche.

The first job I worked on when I moved to NY in 1986 was a TV movie version of The Saint,* (which I got hired on because a Script Supervisor I knew introduced me to a 2nd A.D. she knew...who gave me the gig because I helped move his furniture -- and, to be honest, I probably wouldn't suck any worse than anybody else he may have been considering).  There was one PA on the show who was a bona fide Silver Spoon.  His uncle was a VP at the company that was financing the show. If Vinnie Barbarino and Arnold Horshack had had a love child, this PA would have been the result.  He was a little rough around the edges.

On the first day of shooting (in the middle of nowhere in The Bronx), he was assigned to get breakfast for the actors as they arrived.  One of the female supporting cast was a woman who fancied herself a real-life incarnation of Lovey Howell. 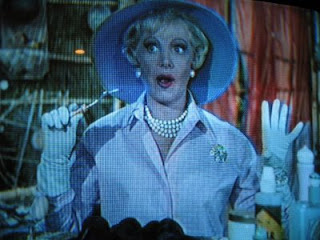 She was very prim and proper and she oozed entitlement. Anyway, Silver Spoon approaches her as she's arriving at her trailer and asks if he can get her anything for breakfast.  She responded in her veddy-proper  (and totally made up) upper crust British accent, "Why yes, dear boy.  I believe I'd like some banana nut bread and a chilled glass of Evian."  Silver Spoon responded in his best Sweathog delivery, "I'll give it a shot Lady, but have you ever been to The Bronx before?  I'm pretty sure you're gonna be shit-out-of-luck on that one!"  I don't remember what his assignment was on the second day.

On another show, our 2nd A.D. was our 2nd A.D. because he was related to someone at the studio.  I honestly don't remember if he was any good at his job, but I do remember that he was universally despised.   By everyone.  For some reason, he had brought his surfboard with him from California.  Granted, there might have been somewhere for him to go surfing, but we were working 6-day weeks, and it was a little doubtful that he'd have had the time.  The Producer had our office call the hotel one day and claim we needed to get something for him from his room, so could the hotel please let one of the P.A.'s in to get it?  Of course, the hotel thought they were doing him a favor and the PA -- as he was assigned to do -- went in and kidnapped the surfboard.  When the despised 2nd A.D. got back to his room that night, instead of his surfboard, he found a ransom note.  It had a picture of the surfboard juxtaposed with that day's NY Times and some list of ridiculous demands for the surfboard's return.  Every few days, he'd get another ransom note, usually with four or five crew members holding the board -- their heads artfully cropped out of the photo.  The best part was that he could have gotten his board back pretty much anytime he wanted.  The surfboard spent weeks cunningly hidden in his office, which he never visited even once after we started shooting.

I believe I mentioned that he was despised by everyone.  Everyone, in this case, included the male lead in the movie.  The only thing that guy hated more than this A.D. was when a cell phone went off during a take.  This was in the days when not everyone had a cell phone yet and if a 2nd AD didn't have his own, he'd be assigned one by Production to conduct business on set.  A running bit of torment (for the run of the show) was for some random crew member to borrow his phone to call the Production Office and then hand it back to him immediately before a take.  With the ringer turned as loud as it would go.  And, not leaving things to chance, the Production Office would call his phone about a minute-and-a-half later.

In hindsight, I almost feel sorry for the guy.