Earlier today, I was flitting about the internet and happened upon this post by David, whose blog I particularly enjoy when I remember to read it. (I'd add it to my sidebar, but it's one of a few blogs I pig-headedly refuse to add just because I like it -- That would make me look too much like I'm playing follow-the-leader to other friends who have it linked. And yes, I know that argument has almost as much logic as a five-year-old threatening to run away and "then, they'll be sorry!")

Anyway, reading that post reminds me that I'm thankful I wasn't born a few years earlier, otherwise, I'd have spent most of my childhood a a gibbering idiot, in constant fear of nuclear annihilation. Lucky for me, during the Cuban Missile Crisis, I was just approaching my third birthday and spent my days concentrating on life's important lessons like whether dirt or pine cones tasted better. (Dirt is kinda gritty, but pine cones leave a sticky residue.) And things had calmed considerably by the time I started thinking deep thoughts about anything other than cap guns or whether Bewitched or Gomer Pyle was on TV that night.

My parents, obviously, were aware of the danger presented by the Cuban Missile Crisis, and presumably, throughout the remainder of the Cold War. I congratulate them on not having become gibbering idiots, in constant fear of nuclear annihilation.  Or putting up a really good front, anyway.  However, the fact that they weren't completely incapacitated by fear doesn't mean they didn't think about that stuff or take reasonable steps.  It's not like they built a bomb shelter in the backyard, but I have a distinct memory of one or more shelves in the bathroom closet being stuffed with bottled water and flashlights and batteries and things like that. I suppose those were also handy things to have around in the event of a not-unheard-of Hurricane coming along and rearranging the geography. (I'm starting to think I grew up in a really dangerous fucking place!)

By now, some of you (regulars who can't be blamed for forgetting and new visitors who have no reason to know in the first place), will be asking yourselves, "Where the hell did Nathan grow up?"  Well, pretty much at Ground Zero of what would have been on the Soviets' list of worthwhile First Strike Targets -- Jacksonville, Florida. More on that later.

In addition to having bottled water stored, (latent steam, really), I'm pretty sure that every kid I grew up with wore a set of dog tags.  I still have mine! 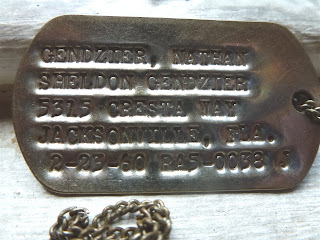 You can see that it listed my name, my father's name, my address, date of birth, phone number and a "J" for Jewish.  It wasn't until I was maybe 17 that it dawned on me that the reason I'd worn this thing when I was a kid was so that there'd be some identification left on the me-shaped shadow that would have remained after a nuclear strike.  I'm not at all sure why they thought it was important that I was Jewish.  My elementary school had considered that a quirk to be tolerated, if not actually accommodated.  And the inclusion of the phone number strikes me as hysterically optimistic. (BTW, if any family member reads this, what the hell did the RA stand for in our phone number?  Was it RAnsom5, or RAdcliff5, or RAygun5 or what?  It's on the tip of my tongue, but I just can't remember.)

Anyway, back to why Jacksonville would have been such an attractive first strike target.  First there's proximity - just a bit over 500 miles as the ICBM flies! 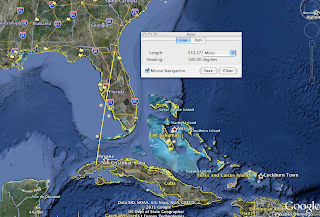 Then, there's the little factoid that by 1962, Jacksonville had a fairly major military presence, including the bastards who proved there were missiles in Cuba to begin with! 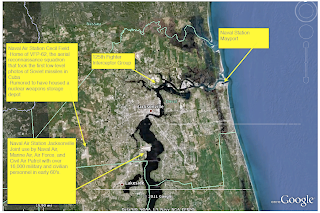 Yeah, I'd have wanted to take those things out quick if I'd been in charge of Soviet plans.

BTW, while researching this post (I did too do research!), I ran across this wonderful tidbit about one of NAS Mayport's more auspicious moments in U.S. History.


Shortly before noon on June 8, 1959, the first official dispatch of U.S. Mail was launched from the guided-missile submarine USS Barbero (SSG 317), from international waters off of the Atlantic Coast.  Twenty-two minutes later, the Regulus I Missile, carrying 3,000 pieces of mail (postcards), landed at the U.S. Naval Auxiliary Air Station, Mayport.  Among the officials present for the event was Postmaster General Arthur Summerfeld, who stated, "This peacetime employment of a guided missile for the important and practical purpose of carrying mail, is the first known official use of missiles by any Post Office Department of any nation." He proclaimed the event to be "of historic significance to the peoples of the entire world," and predicted that "before man reaches the moon, mail will be delivered within hours from New York to California, to Britain, to India or Australia by guided missiles.  We stand on the threshold of rocket mail!"

To my knowledge, this remains the first and last use of missile mail by anyone. 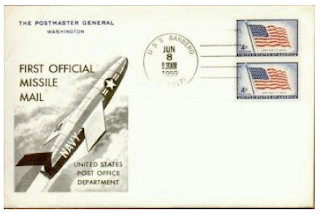 Oh, come on. Show David some linky love. You know you want to, since the rest of the COOL KIDS are doing it.

Also, David, how the heck did you find us? (The UCF, I mean). I know you read a number of our blogs, and I'm always interested in how people arrived to our little cohort.

I found Jim Wright's blog from Scalzi somehow, and then followed one of the blogroll links to Janiece. And then to Eric. And then to a fair number of UCF blogs. The one thing that they had in common was good writing, and that was enough for me.

I'm a historian. I tell stories for a living, and I appreciate good storytelling.

No doubt when I finally do get around to putting a blogroll up on my own blog, it will be rather UCF-heavy.

The one thing I haven't been accused of is good writing. But you're most welcome here anyway.

Would you mind if I borrowed some of this post for my atomic bomb class for that last day that I wrote about?

I'd be honored!
--------------------
I have no idea why, but Blogger won't accept "strike" tags in comments, even though it accepts them in a post. Please consider how clever this response would have looked with proper formatting.

So David's now a member of the UCF auxiliary! Cool.

The Auxiliary brings the cake and pie, right?

We can do that http://blog.charcuteire.com/2010/09/17/killer-chocolate-cake.aspx

An auxiliary member of the UCF? Well that's just coolness itself. :)

I can bring cake and/or pie, but I'm better at cookies.

David - As long as chocolate is involved in some form or another, you're good with this crowd.

Strictly speaking, I think I'm supposed to be in charge and Janiece may be overstepping a bit here, but since we're a pretty anarchic bunch, WTF!

Note: That link apparently goes straight to the comments section. Scroll to the top of the page for FULL IMPACT!

Nathan, I'd have thought the reason they thought your religious affiliation was important should have been depressingly obvious.

It's on there so that they would have known how to bury you if anything other than a you-shaped shadow happened to be left.

And/or how to perform appropriate last rites if you somehow survived a nuclear blast to die of massive third-degree burns or from radiation sickness, or were dying of tertiary consequences of nuclear war such as a cholera epidemic resulting from the destruction/contamination of the water and sewer systems or malnutrition when the food ran out, et al.

Yet another thing it was probably good you didn't know at the time.

Well, at FULL IMPACT that was quite a read.

As a newly minted Auxiliary Member of the UCF, I shall endeavor to live up to the standards set forth. I will also take the full, ornate ceremony of induction (complete with Ceremonial Readings) as read and move on from here.

Also, I make the world's greatest oatmeal-raisin-spice cookies, and any number of chocolate-oriented sweets as well. They do not travel well through the internet, though. It is a quandary.

Somebody needs to volunteer to write our swearing in oath...appropriately vulgar and aggressive. with just a dash of batshit crazy, please.

We'll probably also need some appropriately heathen rituals. Do I hear any votes for virgins and volcanoes? (Carol Elaine can sacrifice eggplants.)

I'd also like to suggest that leadership positions be decided by the "bequeathing of swords by damp twits."

The floor is open.

Wow! You come across as a born-and-raised New Yorker. Curious as to when you moved there and why (you know they have a nice little movie industry in my neck of the woods too).

Well, everybody's got to come from somewhere. But yeah, I've internalized NY obnoxious to an admirable degree, haven't I?

Here's a brief history in the middle of this old post.

And, I suppose, as long as you asked, this is why I don't live in L.A.

I wouldn't say obnoxious, more like refreshingly honest. And considering how rare that is where I live, I would take it as a compliment.

I cannot defend LA, it does have its share of quirks. Except nowadays people jog or walk their dogs (plenty of pedestrians, albeit more than half of the four-legged kind), nobody smokes in restaurants or on the streets (even Beverly Hills adopted the ban on smoking, not that anybody would dare fine its fine citizens) and I'll text you is the new fuck off.

Being in the "the cigar is not a cigar" business, I am not that familiar with the ins and outs of the movie industry (so you may not be missing much, for all I know). I do however have really good looking neighbors. And I enjoy watching them jog and walk their dogs down my street while I smoke on my balcony.

Well, my atomic bomb class appreciated the story of your dog tags tonight - after an hour or so of them debating the justification for bombing Hiroshima and Nagasaki, it was one of the things that brought home the idea that bombers go both ways.