A great deal is being made of Anthony Weiner Tweeting his "bidness" near and far but the thing that surprises me is that anyone sees anything novel in the situation.  Since the first time anyone figured out how to create visual representations, people been immortalizing their naughty bits and displaying them to each other.  The only thing that changes is the technology.

During the Paleolithic, tribal chieftains would spend their leisure hours chiseling pictures of themselves to impress and intimidate the rest of the tribe. They spent most of their time accepting gifts of food and tools from sycophants with only brief interruptions for "administrative clobbering", so these petroglyphs are fairly common. 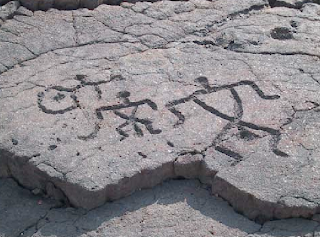 Since the Chief's main job was to keep his followers in line, there was little or no scandal attached to his spending so much time on cave carvings and drawings.  In rare instances, a challenger is known to have taken exception to the fact that the Chief was using communal property to create these drawings.  It would usually go something like this:

Chief Mog: "Oops, Chief Mog make big hole in Gor's face with sharp rock. I use it more til you feel better."

Creation of these images was time consuming and the method of distribution was obviously less than private, but it worked for them at the time.

If we leap forward to the 18th Century, we'll find that silhouettes became all the rage. They were cheap and relatively easy to produce. A lady might pose for a staid and proper silhouette and then, as long as the artist was already there, she might spring for a more risque version. It's well known that a great many men also posed for these, but none of them are known to have survived.  Men kept the ones that women sent to them and women, receiving these unsolicited "portraits" invariably responded with a vehement, "Ewwwwwww".

Side Note: Another thing in the news right now is subject of the "true story" of Paul Revere's ride. A little known facet of the story is that Revere negotiated his release from the British by promising to produce "Etchings of Sexyfullness" of his captors for them to send home to sweethearts.  Once released, Revere mostly reneged on his promise, and in the few cases where he did follow through, he purposely minimized the soldiers' "assets".  In private letters, he proudly called these his "Disappointed Manhood" series.

Which brings us to The Vienna Sausage Outrage.  The middle of the 19th Century saw the confluence of three new technologies which nearly brought about the undoing of our fledgling Republic.  First, there was photography.  Second, there was The Pony Express, a venture which promised to deliver letters from St. Joseph, Missouri to the west coast in only ten days.

The third bit of technology had only recently made its way to America from Europe.  Emperor Franz Joseph of Austria fancied himself something of a "Fashion-Sciences" Prodigy, and much to the detriment of his unraveling Empire, he spent most of his time experimenting with what he called, "Garments of Import to the Regal Reign".  Most of his projects were eventually abandoned, but one that came to fruition, he called The Austrian Unmentionable.  This was an  undergarment "of unprecedented clingfulness.  The wearing of these drawers", he enthused, "will not only allow the riding of horse without fear of injury, but shall also unman a soldier's enemy with the display of his masculine magnificence."

In short, Franz Joseph had created Tightie-Whities.  While it's true that Franz Joseph may have percieved the more prurient aspect of his creation, he saw it primarily as a military innovation.

Cut to March of 1861, shortly after the inauguration of Abraham Lincoln. It's well known that many world leaders foresaw the Civil War and were highly solicitous in their offers of assistance to the new President. (The King of Siam offered to send War Elephants.) The Emperor, for his part, sent samples of The Austrian Unmentionable.  It is unclear whether or not his sympathies actually lay with the Union, but he obviously saw the advantage of having his invention "field tested" in the coming conflict. (He's quoted in  letters to his own War and Finance Ministers, saying, "These uncouth Americans, shall nevertheless prove the efficacy of this most advantageous weapon of war.  The rest of the world shall beat upon our doors for the opportunity to purchase them!")

Lincoln didn't really see any great martial advantage to the garment, but he is known to have tried on a pair and pranced about his office while "giggling in a most unseemly girlish fashion."  This is where the confluence of the other two technologies comes into play.


Not only did Lincoln find himself in possession of the most flattering article of raiment he'd ever observed, but he also had a sitting scheduled with Matthew Brady that very afternoon.  Lincoln had, for some time, been corresponding with a 31 year-old bar maid in San Francisco by the name of Edwina Squonch (of the Montpelier Squonches), and couldn't resist the idea of sending her a "naughty remembrance".

The final element of this thinking (or lack thereof), was surely the dizzying speed with which his remembrance might find it's way into Edwina's hands -- a miraculous 27 days with the advent of the Pony "Sex"Press, as he privately called it.

Unfortunately for President Lincoln, his correspondence was intercepted just short of the Sportsman's Hill Relay Station in the California desert by a gang of outlaws.  They found themselves in possession of this photograph and note: These bandits were not only in need of a large score, but they were also Southern Sympathizers. They immediately set about to profit from their find but they found few takers.  Few newspapers were willing to mention, much less publish the incriminating evidence of The Vienna Sausage Outrage.  The few who did found themselves ridiculed by an unbelieving public. Lincoln's defenders pointed out that "such a futuristic set of underdrawers is surely the imaginary creation of some Fantabulist."  They proclaimed it a "highly realistic drawing yet an amateurish attempt at discrediting our most beloved President".

The affair of The Vienna Sausage was soon overtaken by news of Fort Sumter and quickly forgotten and faded to a little remarked historical footnote.

Tragically, and only recently discovered, one of the band of outlaws who had envisioned riches beyond imagining, only to be disappointed, was an adventurer by the name of Mortimer Wilkes, a distant cousin of John Wilkes Booth.  Mortimer, finding himself destitute once more, made his way back east where he proceeded to foist himself upon the generosity of family for the rest of his days.

John, who knew the truth, allowed the grudge to fester for a few years before taking action.
Posted by Nathan at 1:42 PM

What the hell is wrong with you?

That's exactly the reaction I was going for!

Janiece-
we should all be grateful Nathan is not in politics...no telling what he's post then!

I have to stop reading your posts, it's depressing how smart and creative they are. Shame on you for making me feel this way!

I'm really sorry. Most people tell me how smart they feel by comparison after reading my stuff.

they're lying. to save face.