Death of a Binky.

Not all Binkies are created equal.

Once upon a time, I was working on a job in Cincinnati and a rather large fellow by the name of Nathaniel interviewed to work for me. I was suitably impressed by him (and I loathed the only other guy I interviewed) so I hired him. I decreed -- as is my wont to do -- that there could only be one Nathan in the department, so Nathaniel would henceforth be known to one and all as...Binky. He was introduced to practically everyone else on the movie as Binky; I'm not sure many people knew his real name.

You may think this was a cruel nickname to hang on some poor young guy who was otherwise as un-Binky-like as one can imagine -- and it was. It got even worse when Nathaniel moved to NY -- and was once again introduced to people...as Binky. I believe he was stuck with the name for 5 or 6 years.

So, did Binky die? No! Heaven forfend! He's alive and well and working far enough from my circle of hell to have outgrown that hated nickname. I saw him only a couple of months ago and he's positively flourishing.

So what the fuck is this post about? It's about my binky! I believe it was around 1994, that Anonymous GF bought a sweatshirt. It was a really comfortable sweatshirt. It was without stupid logos or printing that one might outgrow or come to despise. It was soft and warm. It was everything one could hope for in a sweatshirt.

I decided it was mine.

I wore it constantly. I wore it so much that GF compared it to Linus' security blanket. She decreed that it should henceforth be referred to as my Binky! After about 5 years of constant wear, it started to develop some imperfections. I didn't care. It was my Binky!

GF is not in the habit of dictating to me what I may and may not wear, but she decreed that the Binky was no longer to be worn in public. I heard and obeyed (mostly). A couple of weeks ago, I pulled on my trusty, loyal Binky to do some stuff in the backyard, and even I had to acknowledge that the thing had grown a bit ratty. Need some documentation? 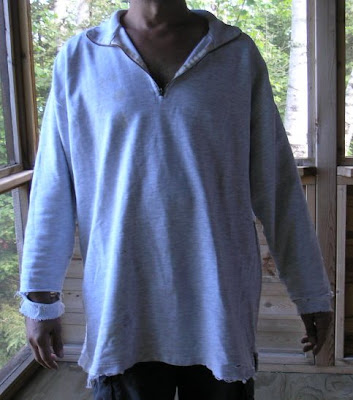 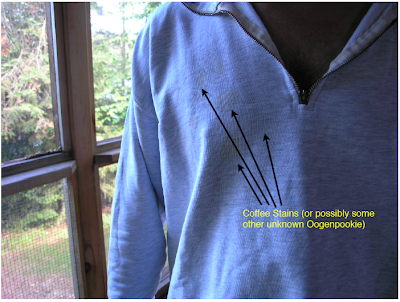 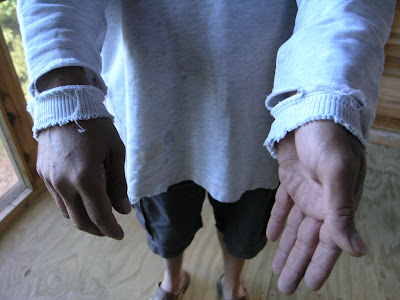 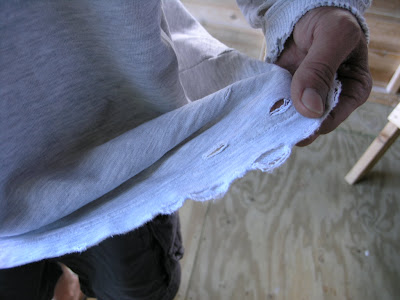 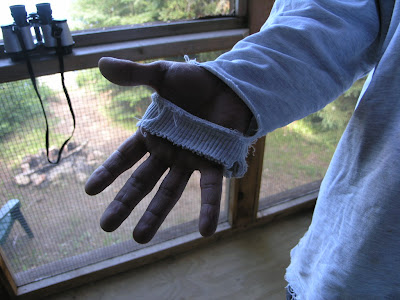 Yup! Poor Binky needed to be put out of its misery. I decided I'd bring it on our trip to Minnesota and say goodbye to it with proper ceremony. You don't just toss such a beloved item in the trash after so many years of faithful service. Things of this nature must be cremated and properly mourned.

So, the other night, after grilled pizza (which I accidentally burned, but that's another story), Vince, his Ex, Anon GF and I all gathered to honor my old, old friend. 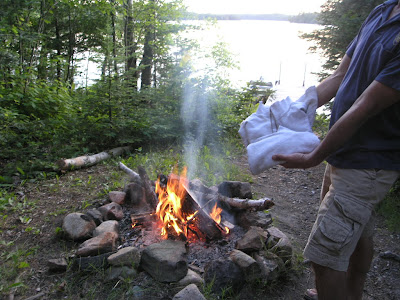 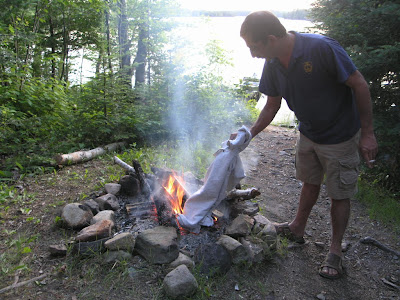 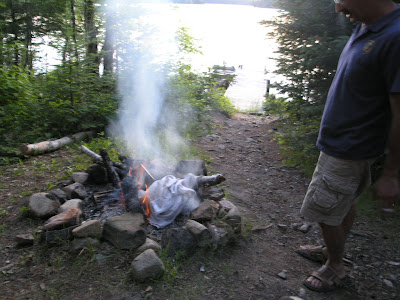 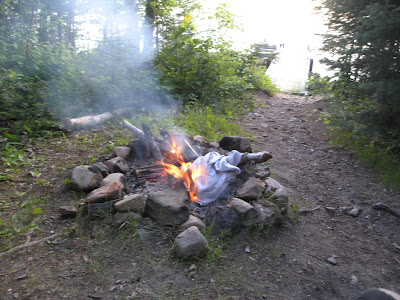 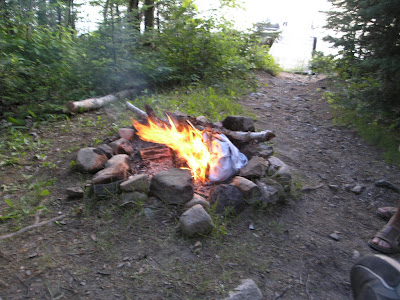 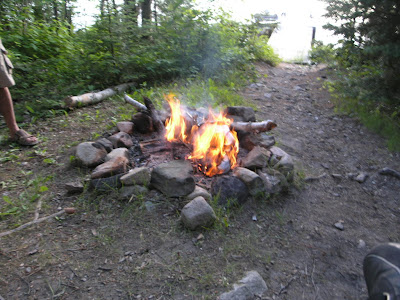 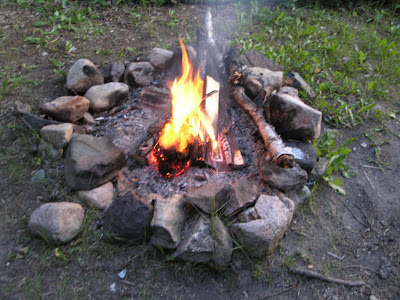 Yes, tears were shed -- mine were honest mourning; theirs were from laughing at me -- the bastards! I am now without a Binky. I'm am bereft of Bink. I am Binkless.

I'm on the lookout for a replacement.
Posted by Nathan at 12:52 PM

Why did you do that, it looks like it was just getting comfortable.

You could've just cut off the sleeve ends and hemmed them under ... likewise the waist...

The Ex claims that she did not laugh, just took some pictures. I freely admit that I laughed my ass off. Yes, it was cruel. But you had to be there. Especially for the fun of getting the fire started.

I took the burning ceremony pictures you see with Nathan's most excellent camera.

MWT, trust me, it had reached the end of the road. I suspect that any cutting would have led to further unravel ling and falling to pieces.

There is not one damned thing wrong with my fire starting method.

1. Drink many cans of beer.
2. Take empty cardboard box that the beer arrived in and stuff it full of paper and various sizes of kindling (no wasting time with getting the little stuff started first and then gradually building).
3. Put box in fire pit and surround with/pile on cut logs for burning.
4. Light box on fire.
5. Stand upwind for 10 minutes while massive amounts of smoke blow away from you.
5. Hear the distinctive "WHOOOMPF" when the flames overpower the smoke.

This post disturbs me a bit....my nickname from residence days was/is Binky.
So I'm a little creeped out.

Why did you destroy a perfectly good shirt?

Are you sure you vote Democrat?

Not only did you destroy a perfectly salvageable piece of fine natural COTTON clothing - you burned it! The smoke! the cancerogenes that escaped in the fresh green Gaia's forest! the stink that poisoned the air (btw, I suspect that's where the tears came from). And what did you do with the zipper, huh? It lies there in the wilderness, scorched, unable to start a new life as a piece of useful machinery - like a pistol trigger, for instance.

And now you're consoled by some poor substitution...there is no fidelity in the world. Poor Binky, indeed!

I looked through the ashes the next morning and mysteriously enough, there was no sign of it. I don't think it was plastic and I don't think the fire was hot enough to melt it, but...nothing.

Maybe it just fell apart into it's component pieces?

Nathan, my condolences on your loss. ;)

Anon GF, you're a good woman. That would have mysteriously found its way to the bottom of a goodwill donation bag a few years ago in my house. My reply to the hub? "I have no idea where it went - are you sure it's not in the back of the closet somewhere?"

I sometimes suspect I'm part guy because that's I how tend to be with clothes that I love. I may stop wearing something in public when I recognize it's gotten too ratty, but you better believe that I'll wear that beloved piece of clothing until it disintegrates. I still mourn a nightgown that was a present from my parents in my teens and which I wore for the next fifteen years, until even I realized that there wasn't much left holding it together. I've never found anything to match its like.

Farewell, dear Binky. You were a good and faithful servant.

Ah, a funeral pyre to honor the passing of a loyal companion. You did right by the old boy.

I really liked the semi-detached cuffs. I have them on my jeans.

Now that you've shown proper respect for Binky, it's time to move on. The time has come for...