Hey Kids...How 'Bout Some Crappy Pictures From An Airplane?

First two nights will be spent at GF's mother's place on Park Point. Until a couple of years ago, this spit of land was overrun with rabbits. Gajillions of rabbits. They don't have rabbits anymore. That little island you see is a bird sanctuary and also the home to a bunch of foxes who feasted on the rabbits. I happen to know they didn't get all of them. But they're gone. I'm not asking any questions. 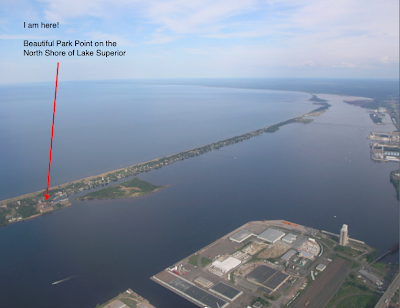 Here's an ore ship about to go under the Richard I. Bong  John A. Blatnik Bridge, linking Duluth, MN to Superior, WI. (You should still read the Bong article even if I got Duluth's bridges mixed up. Amazing guy). 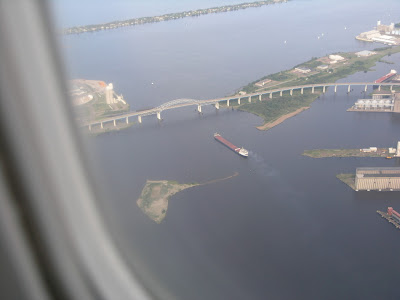 Another shot of the ore ship. Why? There wasn't a whole lot else to take pictures of. 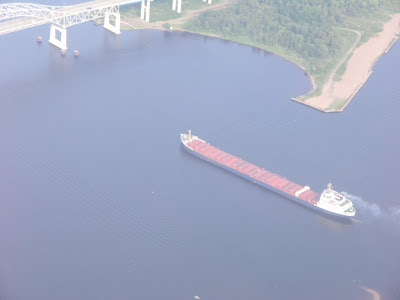 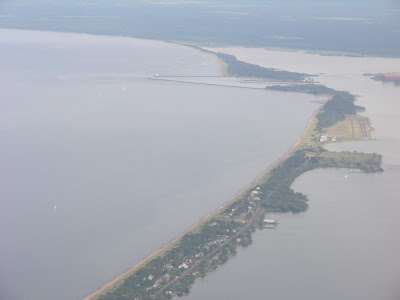 Hey! Look at that. Is that a great lake or what? Some might even say it's Superior. (Groan). 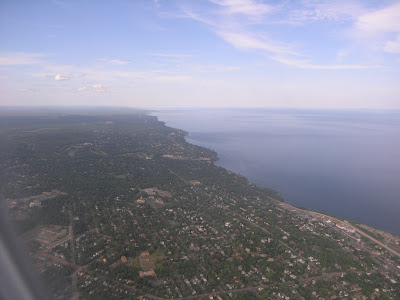 Gee, a lot of that looks familiar - just not from that height. Welcome to Minnesota, home of the phrase "you betcha." That dingy Sarah Palin stole it from us, but it's ours anyway.

And good morning to you Vince.

I'll be more talkative after I've had some coffee and toa-oa-oast. (my spelling there really doesn't do the pronunciation justice.)

Ah, I've lived most of my life in the lake effect shadows of four of the Great Lakes...

Sorry Bud, but that is not the Richard I. Bong bridge. You have a photo of the John A. Blatnik bridge. Same structural design as the I-35 bridge that collapsed in the Twin Cities, recent maintenance was done on it to bring it up to code though.