Dreams are weird. I'm sure I dream on a regular basis, but I usually don't remember them when I wake up. And sometimes, it's obvious what's causing you to dream about certain things.

I remember when we first got Tomb Raider and there was this one room I couldn't get into without dying, I dreamed all night about the controller sequence required to leap three times from the top of one plinth to another, then continue without stopping (to avoid the giant axe on a pendulum that was coming), leap out into space, grab the swinging rope, release at the top of the arc to get into the cave on the cliff wall and roll to the left before the bad guys could shoot me. I know it took me hours to survive getting into that damned room...so it's not a surprise it intruded into my sleep.

This morning, I woke up from a nightmare of The Location Manager's Kind at 5:45 a.m. My heart was racing. I was bathed in sweat. I was panting. What could inspire such nocturnal terrors?

So we're kind of meticulous about our directions. And it's not uncommon at all to have to create directions from multiple places for multiple types of vehicles. Take a look at these directions to a set in Norwalk, CT. We had to get people there from Stamford and from Bridgeport. There are a lot of low railroad overpasses in Norwalk, so some trucks could get under them and others couldn't. I think you can embiggen this to give you an idea of how nuts it can be. 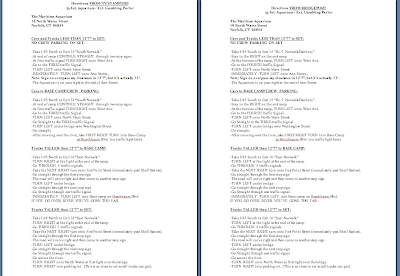 We also have to hang big fluorescent arrows at every turn anyone might have to make on the way to set...from each direction they might be coming. Then we have to have signs splitting them off to Crew Parking, Truck Parking, Camper Parking, etc. etc. etc.

We also tend to create set maps so everybody will know where they should land once they get there. This is a completely futile act that only makes us and the Asst. Directors feel good. As soon as anyone in a vehicle spots someone with a walkie-talkie, they ask where they should park. If someone gets there early, he'll park wherever he wants. For example, if a PA driving a Unit Van shows up early, he'll just pull into the space in front of the doors to location. He'll proudly tell you about what a great spot he got. I'll proudly tell him he's parked in the first shot and to kindly move the van two blocks away to the spot he should have seen on the set map. 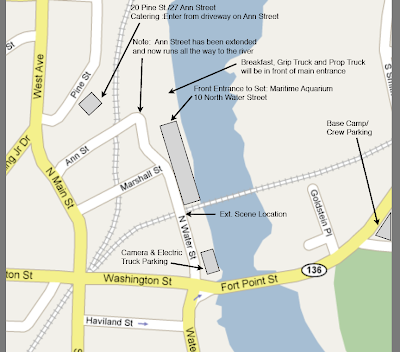 So, back to last night's dream. I dreamed I was working on a one day re-shoot for a movie we had finished years ago. (I don't know what movie, only that it should have been in theaters and forgotten by then.) Our location was supposed to be some field in Greenwich, CT.

Weirdness #1: Reshoots tend to go back to places they shot in originally. I've never shot a day in Greenwich, but I could perfectly picture the location and remember being there.

The problem was that I hadn't done any directions! And even worse, I didn't know how to get where I was going. In the dream, I could picture the map. I could remember the hotel I'd stayed in (which , if memory serves, is completely a figment of my imagination). I could picture the turnoff to the location. But I had no idea how to get there.

So I decided to stop and ask for directions. I pulled into an enclave that was a cross between...

The town in Waterworld and... 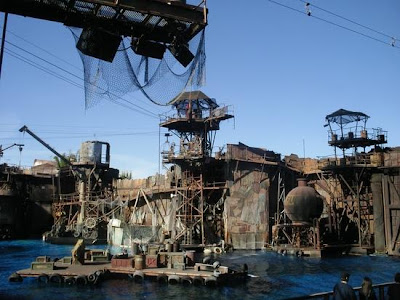 ...the town in the Popeye movie. 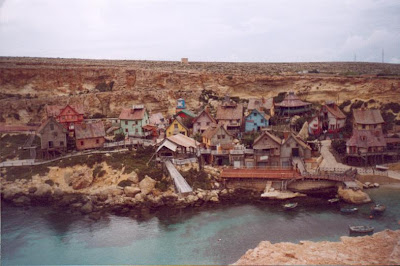 Now, Greenwich is a coastal town, but there's nowhere in Greenwich that resembles either of those images. It's a pretty wealthy, hoity-toity little place. And in my dream, the town was built on terraces but there wasn't any actual water there. The important thing was that I could drive my car into the enclave, but I had to keep running up or down stairs to find people to ask directions.

Somewhere around this point is when I woke up in a complete and utter panic. It didn't take me long to remember that I wasn't actually working today, much less in Greenwich, CT on a reshoot for some movie that's never been shot in the first place. And I was completely off the hook for not doing maps and directions since nobody was trying to get there.

Oh, and if you're wondering about the pizza reference, that's from one of the first work-related nightmares I can remember having. During the summer after my freshman year in college, I went home to Florida and got a summer job at a Pizza Hut. For the first week, I had dreams every night of putting pepperoni onto a pizza in a spiral pattern starting at the outside and working my way in. As I got close to the middle (and completion), the pepperoni slices on the outer perimeter would start to disappear as fast as I put them on. Then I'd have to start over again and this went on endlessly and made for some piss-poor sleeping.

I was a Pepperoni Sysiphus!

Now I just eat the stuff and I'm much happier. 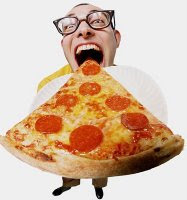 I am back. Whatever happened, the tracker I had for your blog did not renew.

Now I am going to read you stuff, and leave another comment.

I've had dreams like that. In some cases, I get so fed up not being able to figure out the path to where I'm trying to go, that I just end up teleporting instead. Wish I could do that in real life...

You eat the stuff if you can get them to deliver it. :p