Give Us A Year And We'll Give You The World!

I take a perverse pleasure in finding my way around new places with a paper map in hand. I've tried using GPS, but I've found that after a week of following its directions, I won't have learned how to get around without it. With a map, I get used to the place and stop needing it quite so much; with GPS, I never stop needing that lady to tell me when to turn left.

Anyway, that's my usual long-winded way of telling you about an Atlas I've got that I kind of treasure. It's The Encyclopaedia Britannica World Atlas, published in 1946. First of all, this sucker is big. It measures 12.5" by 18" and it's about 300 pages long. (It's hard to tell since there are a bunch of sections where they start counting all over again.)

It's filled with all sorts of anachronisms. For example: Pluto was still a planet. (I still think it is anyway and when people say it isn't, I'm happy to whip out this atlas, show them this page and say, "I win"; then quickly put the book away before anyone gets a chance to see I'm showing them a 60-year-old reference.) 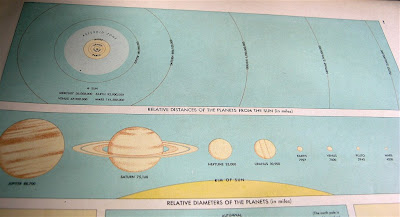 One of the main things that interests me is how they treated the defeated Axis Powers.

Here's what Italy seemed to have been left with. 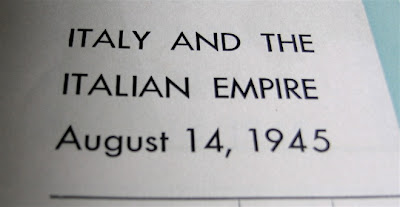 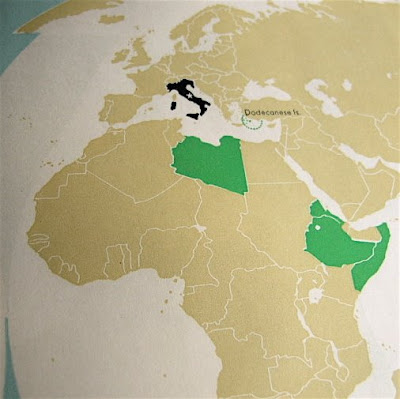 Here's what Japan still controlled...sort of. (I'll get back to that.) 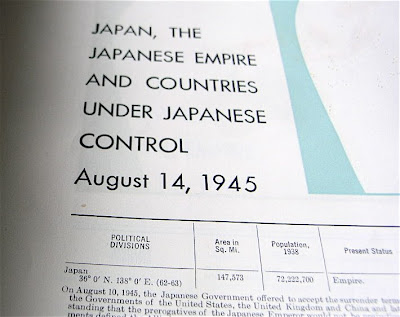 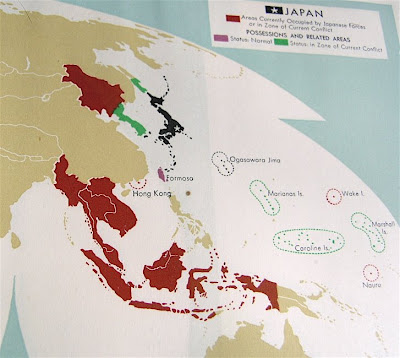 Germany is shown with its pre-WWII borders and, interestingly enough, there's no division of East and West Germany. Berlin is shown as a united city. So, on the one hand, Germany has already been stripped of all of it's territories, colonies and war gains, but on the other hand, the Soviets aren't given their toe-hold either. In fact, the USSR is shown with its pre-WWII borders. No presence in the Baltics, or anywhere else in Eastern Europe. A bit of British and American wishful thinking?

But no worries. Loosely attached to the flyleaf when you open the Atlas, you'll find this note. 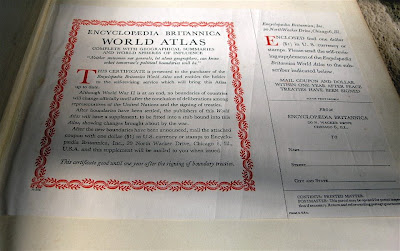 Here, look closer. After the United Nations finishes hashing out all of the new borders and Spheres of Influence, you'll be able to mail $1 to them and get updated inserts for your atlas. 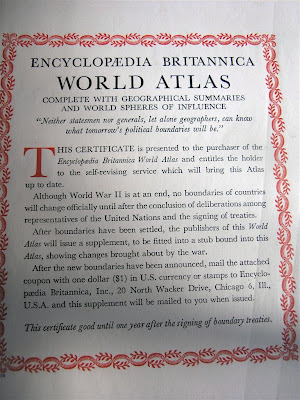 I can't tell you how tempted I was to send them a dollar when I got this atlas about 12 years ago. Then I noticed This certificate good until one year after the signing of boundary treaties. That pissed me off. (For those of you who weren't paying attention...does the title make sense now?) 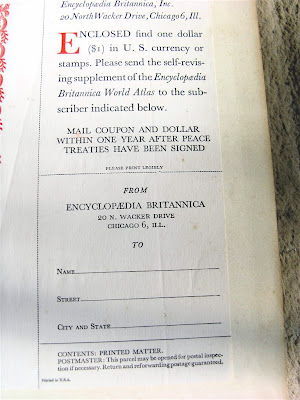 I could, of course, publish nifty pictures and data charts from this for a long, long time without running out of material. Comparisons of Americans working in Agriculture vs. Industry are interesting. Some of the photos from around the world are terrific. There's a section of superlatives; tallest mountains, largest lakes, most active volcanoes, etc. (most of that stuff hasn't changed).

You and my Hot Mom would get along famously. She loves maps, too, but in her case it's because she was a professional cartographer for many years.

Does it get down to street level? Even a look at the U.S. highway system between then and now might be interesting.

It gets down to state level in the U.S. and then it shows railroads, rivers, canals, cities and towns.

No roadways at all (except it predates the Interstates.)

And no StreetView...so don't bother looking for your house.

Love maps. This past year there's been two incidents where I've talked people through directions when they've been lost and ended the conversation, "Go to the store, buy some maps," or in the other case, "Once you cross into PA, there will be a rest stop with 'visitor information', stop there, they have free maps."

Are you sure about the houses? My house was around then!

I love maps. I think that ThePinkThing's generation may have no clue about maps because they will rely on GPS too much...