The blog is till broken. I've looked at the possibility of moving it to WordPress, but unless I'm missing something, things aren't as easy to customize over there (without getting into actual coding, I mean). I like how easy it is to do what I want with the thing over here. (Except, of course getting it back to being findable.)

Look at the sad state of affairs when it comes to visits here. I've nosedived from almost 100 visits per day to 20 or so. 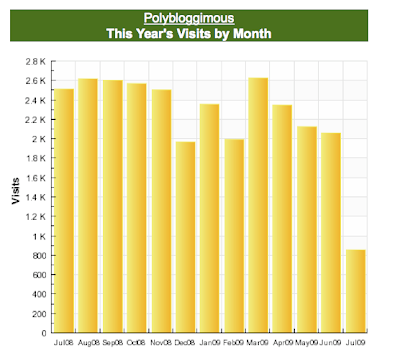 Having said that, it's still no excuse for not adding scintillating content. (The first smartass who asks what my excuse was before things got broke is going to get such a pop to the side of the head.) So, I'm ashamed at the lack of new stuff here and I'm going to begin remedying that situation tomorrow.

In the meantime, I'll just update you on one thing.

You may recall my post about Henry Allingham, the oldest man in the world. Well Henry died on Sunday (or it may have been Saturday depending on what time zone you're in). Now Walter Breuning (112) (linked post has a video of Walter that starts as soon as the page loads), of Great Falls, MT is the oldest man in the world. Now I certainly don't mean any slam on Walter, but he seems to have lived quite the wholesome lifestyle. What the hell kind of example is that for me to look up to. I say, as a celebrity, he has a responsibility to age in a way that excuses anything I choose to do. Get with it Walter.
Posted by Nathan at 5:47 PM