If I Smoke Enough, I May Just Live Forever!

Every time I turn around, some bastard is trying to get me to quit smoking. Last week it was a set dresser while we were standing in the middle of the street as we shot a scene on a doorstep in Harlem. Then she moved on to the topic of something about all prescription drugs being poison designed to kill us all. I politely invited her to get away from me.

Every medical professional I cross paths with feels the need to lecture me on smoking. My chiropractor says something during almost every visit. I take it with a grain of salt, since this is the same guy who wanted me to take valerian root at some point in the past. I don't remember what the benefit was supposed to be, but the downside was that it made me smell like I'd been grazing on dog poop.

I've had regular checkups with my doctor since my little visit to the hospital earlier this year. He's been making slight adjustments to which drugs he's got me on and he's expressed that he's very pleased with how effectively I've reacted to them. (Unless he's only a shill for whatever evil cabal is trying to kill me with pharmaceuticals.) And, of course, I get a primer on the dangers of smoking during each visit. We'll come back to that in a moment.

There was an article yesterday in The Guardian about Henry Allingham becoming, not only Britain's oldest living WWI vet, but also the world's oldest man at 113. Read the article. He's an interesting guy. But the part that warrants including him in this little post is:

Despite an apparently blameless life, he attributes his longevity to "cigarettes, whisky and wild, wild women..."

My friggin' hero! Here...just look at him! 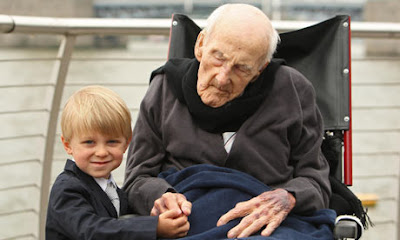 No!...Not that picture! (And even if that was the one I meant, he's just pining for the fjords, there...honest!) 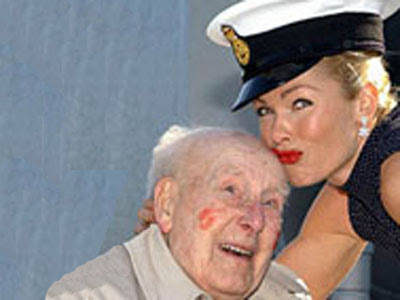 So, anyway, you can see where I'm going with this. I'm holding up the one genetic mutant I could find as my exemplar to prove that you should all leave me the hell alone. Yes, thank you very much, I do know the definition of specious.

But that brings me back to the topic of my last doctor's visit. As I mentioned, he gave me the usual smoking lecture. In all honesty, this one may have lasted...oh, thirty seconds longer than usual. I chalked it up to being the equivalent of the lawyer who gets overruled and says, "No, I strenuously object, your honor". Hey, you can't blame the guy for trying.

And then, I got the bill. I was surprised to see that I owed a co-pay of $55.00 for a Smoking cessation session. Really? REALLY!??!!! I am so telling him to shut up next time I visit.

BTW, I know some of you are going to lecture me on this subject in the comments. Fine, go ahead. But if you try to bill me for it, you'll be getting a little bottle of valerian root and a lovely note telling you to "Eat... "
Posted by Nathan at 10:17 AM

Nathan, I get the same thing, although NOT from my doctor...she asks if I am still smoking, rolls her eyes a bit but never says a word...could be that whole "pot calling the kettle black" thing.
No lectures from me, just a nodding, knowing glance.

I quit a kazillion years ago. I'd like all my firends (which includes you and Kimby) to quit. But you're all grown up and get to make your own decisions. Even if they are stupid. And I say that with love in my heart and a banana in my stomach.

You'll quit when you're ready, and not before. Nagging people doesn't make that day come any sooner.

I agree, it's a free country and we all have our vices. I will kick you out to the back deck to smoke if you're at my house. :)

Tell the good doctor he owes you 5.5 packs of cigarettes!

What they said. I've never smoked. Well, not tobacco. But I grew up with my dad smoking Pall Malls Red Pack like a freaking chimney. I never wanted to smoke with that smell around. One thing I noticed with my father was that nagging never helped. Eventually he worked on quitting, but only when he was ready.

I would be curious as to what Henry Allingham smokes. The content may be different than what is sold here in the States.

I think I'll make him go to PA and buy them there. I'll get twice as many packs out of the deal.

Don't forget to tell us how well that went, Nathan.

If you hang out here long enough, you'll come to know that we don't let little things like reality trouble us.

That is a given; I think somewhere in his introduction of you @Chicagoboyz John let it be known that you're a lefty, no?
I've lived in this city long enough not to expect any different from new acquaintances.

HighLine must be particularly beautiful and melancholic under the rain.

Your doctor is part of the problem with the health care system, and he probably thought he was a nice guy.

And for the record I don't smoke, have never smoked and get allergic reactions to smoking -- but this ain't right.

The second time I'd let him know that I was calling the police and reporting an attempt at financial theft and fraud. Don't care if those are the legal terms -- I don't hand out $55 to anyone who asks/demands that I do without asking first.

If he argues that these things are "routine" with your physical, then he can eat the costs, why thank you.

Very annoyed at this. Maybe it's time to take a nap.

Regardless of having made light of it, I actually am pissed off about the whole thing and I'll be calling him to have it removed from the bill.

I'm fairly certain he will, but if not, I'm going to tell him he's prohibited from mentioning smoking in my presence from now on.

I'm with Dr. Phil on this one.

And yeah, nagging only extends the time before you decide to quit. A person's knee-jerk reaction to nagging is to do the opposite.

Also, Henry Allingham is not alone, George Burns died at a 100. He also drank and smoked every day. It also probably has to do with diet, exercise, exposure to toxins as well as plain ol' genetics.

I've never understood the whole "I need to run your life" thing. You are an adult, fully-functional (as far as I can tell) mentally, yet "for our own good" you need to be prevented from making decisions.

For behaviours that can affect others - murder, non-vaccinations of infectionous diseases, etc. It is understandable that the desires of the individual must be balanced with the needs of the general. But when the beahviour does not affect others (such as which orifice you prefer or smoking) I don't see the need.

And the secondhand smoke thing doesn't hold any water either, with separate sections - its just because they don't feel you are qualified to make your own decision because you might decide something they don't think is right, so they must take away your choice..

Of course, charging for it is a bit much!