How Much Does It Cost To Have An Elephant Run Into A Lake? A Whole Lot More Than You'd Think!

In 1992, I went to Oakland, CA to work on Made in America. The Location Manager had been promoted to Asst. UPM and I'd be something between an Asst. Location Manager and a full-fledged Location Manager. By the time I arrived, much of what I'm about to relate was already set in motion. Note: On reading this a second time, I realize it might be taken as me trying to dodge responsibility for something. The truth is, I'd love to be able to take credit for making this one work...but I can't.

The movie centers on Nia Long discovering that her mother, (Whoopi Goldberg) has been hiding from her the fact that she's the product of artificial insemination. She goes off in search of her biological father (aided in an early movie appearance by Will Smith), and discovers that Ted Danson's character was the donor. Hilarity ensues! (Actually, it's a cute movie and managed to gross about 6 times it's production budget. You could do worse with a rainy afternoon.)

Anyway, Danson plays Hal Jackson, a stereotypical overexcited car dealer. His "schtick" is that he regularly appears in his shlocky commercials with various animals. A running joke through the movie is that something usually goes wrong in the course of shooting the commercials. The script had one commercial where Jackson would be riding an elephant and something would startle the elephant, causing it to stampede down the street with Jackson along for the ride. The scene would end when the elephant ran into a nearby lake.

The relevant part here is that when they were scouting for Jackson's car dealership, they wanted to find it in close proximity to some body of water. And while the car dealership does have a few interior scenes, most of the scenes took place on the lot, so the exterior was a more important consideration. Eventually, they decided on building a facade (with a couple of workable interiors), on a parking lot two blocks from Lake Merritt in downtown Oakland.

Here, look! Could that work any better? 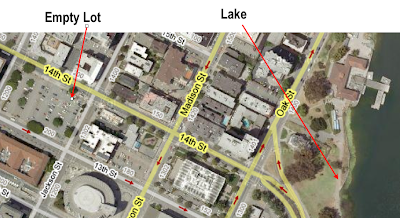 Close proximity to a body of water. Enough streets to get as much stampeding as you could want or compress the action to get him to the lake quicker. The lake was in a city park and the City of Oakland was being extremely cooperative, so everything looked great. They started building the dealership.

At some early stage, they had the Elephant Wrangler and the Stunt Coordinator come and scout the location to make sure everything would work for them. It was quickly agreed that there should be a ramp built just below the surface of the water so the elephant could charge into the lake gradually and have solid footing throughout the stunt.

This may have been a little more complicated than anyone had originally envisioned, but not really a huge deal. This wasn't a no-budget picture and you budget for stuff like that. So drawings were drawn and engineered to handle being submerged in water and supporting 7 tons of elephant. As soon as possible, they went and had meetings with the appropriate city authorities and folks from the Parks Department to get permission to procede. During this meeting, a new complication was discovered.

Here, look at the lake when we zoom out a bit. 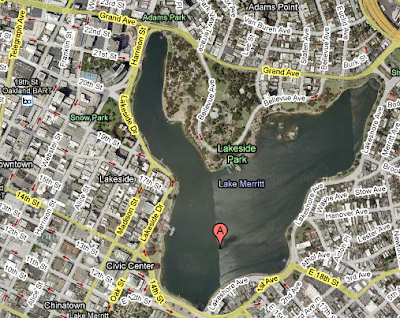 No problem yet. We just wanted to use a tiny piece of this largish lake. It's all within the City of Oakland.

But zoom out just a tad more and what do you see? Is that a little river flowing out of the south end of the lake? And does it connect the lake to the Oakland Inner Harbor Channel? 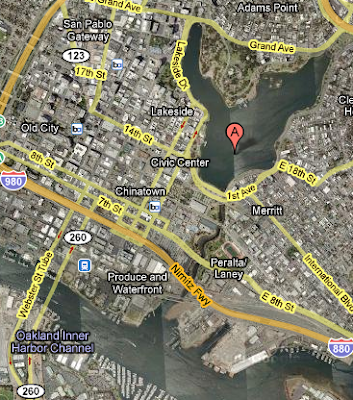 And, oh crap! does the Inner Oakland Harbor Channel connect to San Francisco Bay? Why, yes it does.

And what, precisely does all of this mean for us building an itty-bitty ramp in an itty-bitty corner of a lake entirely within the City of Oakland? 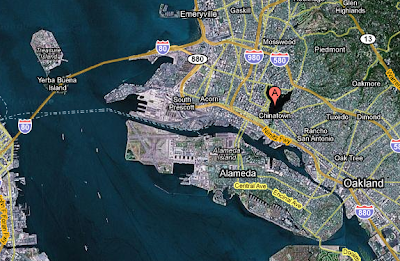 It means the lake is tidal...which means the water is under Federal Jurisdiction. Suddenly, the idea of pounding footings for the ramp into the lake bottom is going to require environmental impact studies and a plan for its removal and soil samples for the lake bottom. It didn't really matter what all that would have cost (a butt-load), because the estimated timeline for doing the studies and filing for the permits would have taken too much time. If permits were issued at all, they wouldn't be issued until a few months after we were supposed to wrap the movie. 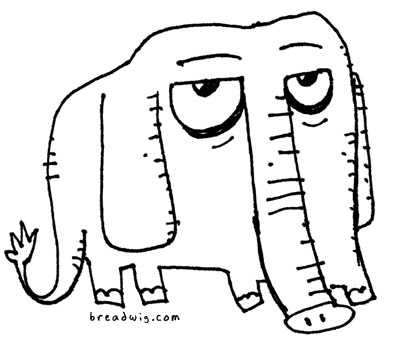 The solution, which wasn't all that cheap, but, at least, only required the City's cooperation turned out to be digging a pool of our own next to the lake...an infinity pool, if you will. 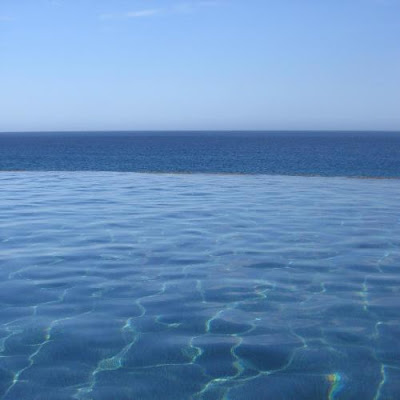 Sample photo stolen off the internet to remind you what an infinity pool looks like next to a real body of water. To enhance verisimilitude, please envision murky water with 6" of visibility and lots of "stuff" floating on the surface.
Since we weren't allowed to have any impact whatsoever on the lake itself, including ever having any of our water (clean) mix with the lake's water (nasty), we had to build a coffer dam at the lake's edge before we even began digging the pool.

And then we shot the scene. And then we drained the pool. And then we filled the pool with the dirt we'd pulled out in the first place. And then we removed the steel coffer dam. And we never got any of our (bad) clean water into their (good) polluted water.

It's a good scene, but a pretty short one when all is said and done.

When you're wondering why it costs so much to make a movie, this is one of the many answers.
Posted by Nathan at 12:17 PM

Exciting! I think I want to work in the movies, behind the scenes.

[to the moral of your story: are you advocating "limited government and reduced bureaucracy?" Heh, as the man says]

We were supposed to have a much advertised "infinity edge pool" on the 7th level deck of my last project. It wouldn't have that seamless appearance with a body of water behind, but rather look like it floated above the city.

The problem was that the public health and safety department wanted a surface all the way around the pool onto which someone might rescue an unconscious person (nevermind that the pool was a mere 15' wide and someone might just as well extract the body on the other side of the pool). So, we had to have a ledge around the "infinity edge" that quite diminished the effect.

You know, Nathan, what you do almost sounds ridiculous enough to be government work...

Trying to read a moral into most of what I write here would be an exercise in futility.

Again? How many exercises in futility this blog holds?

There is a semi-decent Russian joke, that ends thusly:
"and little hedgehogs got pricked, cried, but continued to eat cactus".

That's we and the government. Or fill in any other pair.
Did you like the Film...?

how do you keep an elephant from running into a lake?

Probably were more concerned with the environmental impact of elephant poo in the lake. It's pretty potent stuff.

They were battling a serious goose-shit problem at the time. Since we had people with shovels and pails following our elephant around everywhere, I doubt that was the issue.

The Film was cute, but the characters were all a little two-dimensional.

HAHAHAHAHAHA. I swear I crack me up.

Yick. I'm familiar with the elephant poo issue, have a cousin that was with Ringling Bros Circus for many years. They also employ a team of pooper scoopers to follow the critters around during performances.

Lived in a subdivision one time that had a duck population explosion. Everyone that lived near one of the many "water features" had a duck shit problem!

And of course my dog liked to chase the ducks into the water, so would traipse right through the duck shit.

(places a football, baseball, basketball, soccer ball, volley ball, and bowling ball in the corners of the room)

(steals the flag and runs away)