It's The Pitch Me A Spinoff Contest!

I've been promising you guys a contest and here it is! Last night, I posted a (somewhat lame) episode of CSI: Camelot. You're assignment -- should you choose to accept it-- is to come up with your own spinoff ideas for a show that's on now or was ubiquitous enough in the past. I'm going to suggest some shows, but you can create a spinoff from any show that is 1.) well known, 2.) already has at least one spinoff, and 3.) annoyed you because some (or all) of the spinoffs pissed you off.

Potential shows for spinning off:

1. Only shows that already have at least one spinoff are eligible for spinning off.

2. In keeping with Rule 1, The Simpsons is a spinoff from The Tracey Ullman Show and doesn't have its own spinoff. (i.e. not eligible.)

4. ENTRY FORMAT: Your entry can be practically anything. Write a script (it doesn't have to be long...just enough to convey your idea). Create an ad for the show. Make a cartoon of the show. Describe the pitch meeting. Send a video tape of you and your friends acting out a scene from the show. Whatever you want!

5. JUDGING: Obvously, the judging will be subjective. Many (I hope) will enter; Most will lose! I'll be the chief judge. In addition to myself, I'll be choosing a panel of judges from the people who post such lame entries that they don't have a snowball's chance in hell of winning. (Note: Please don't just tell me you want to be a judge. At least have the decency to submit an entry that's so lame it doesn't have a snowball's chance in hell of winning.)

6. All entries should be posted as comments in this thread. I'll keep linking back to it at the top of the blog so it's easy to find. If you have pictures or video, please post them as a link. (I'm think that's the only way you can post them, but some of you are geniuses and showing up my internet skilz won't score you any points.)

7. Not that I think I'll get inundated here, but you may submit a maximum of two entries.

FIRST PRIZE will (of course) go to the best entry. Your very own nifty-as-hell reusable metal water bottle that was provided to the crew of the movie SALT, which just completed filming! Suitably embossed on one side with the name of the movie and serendipitously embossed with my name on the other side. (OK, the bottles are made by Nathan Human Propulsion Laboratories.)

THE LOSER PRIZE will go to the lamest entry (in my sole judgment.) This one only has my name on it sucker! 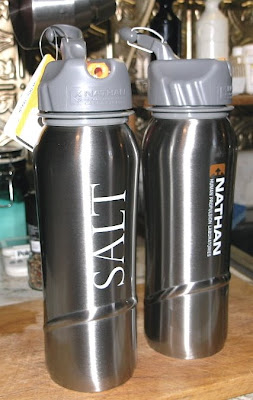 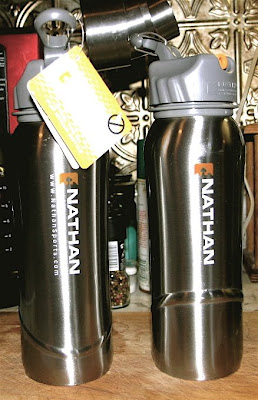 You're encouraged to invite your friends and enemies. Now go get creative!
Posted by Nathan at 10:07 AM

OPENING NARRATION: In the criminal justice system, the Democratic People's Republic is represented by one group: the judges, who sentence the enemies of the People. These are their stories.

(For the next forty-five minutes, the screen is completely black except for the propagandistic interruptions by the capitalist pig running-dog sponsors in their ceasless attempts to corrupt the soul of the worker with useless materialist goods and extravagances.)

FADE IN: A courtroom in PYONGYANG.

JUDGE: You have confessed to crimes against The People! Do you have anything to say before the court passes sentence!

JUDGE: You dare plea for mercy? You dare insult the People's Court* in such a matter? Well! We shall show you more consideration than you displayed for the Eternal President, may he live forever! This court sentences you to twelve years hard labor at a re-education center! Guard! Remove the Defendant!

(Defendant is removed. FADE OUT to last commercial break for pathetic capitalist luxury like reliable electricity wired directly to home or supermarket with food on shelves.)

FADE IN on Judges:

OTHER JUDGE: I was impressed with your powerful delivery of sentence upon that craven emissary of the Western dogs.

JUDGE: I should have sentenced the Defendant to fifteen years hard labor for his crimes. Perhaps I was too soft. I hope his wife and children will learn from this example and not display counterrevolutionary tendencies of their own. They shall be watched.

OTHER JUDGE: It indeed makes you think.

Can I post mine on my own site w/ just a hyperlink in your comment thread? Not that I've written it yet. And, I'm at a severe disadvantage because I DON'T WATCH TV. Sigh. OK... no excuse, Eric doesn't either.

Oh hell yes. I'm all kinds of in on this one.

::goes off gleefully rubbing his hands mumbling about GWB and PeeWee's Playhouse:::

Hey, I got a long weekend coming up, should be able to come up with something.

Follow the disciple and the Emperor as they cross the galaxy in their misappropriated Vorlon ship, looking for fun, adventure, and Morden's Head on a Pole.

Hilarity ensues every time Kitt sits herself in the driver's seat.

OK, that's it for tonight. Problem is I don't know that many TV shows.

The Thigh Masters vs Hardee's Thickburger

Baywatch: David Hasselhoff and the Girdle of Doom

I think Eric is both the winner and the loser.

I'm pretty sure I managed to break all of the rules at least once. (At least I tried to.)

Well, I, Michelle, will be following the rules. Announcements will be made on Friday...because I haven't had time to read all the entries yet.