Serving More Than One Master.

Dollygrippery had an interesting post up last week about how you can find yourself in a sticky situation when someone throws their weight around to hire you and usurps that decision from the person who usually gets to make that choice. In his case, he's usually hired by the Key Grip; he's part of a team of folks who are used to working together. This has some distinct advantages. Occasionally, however, the Camera Operator will dictate who he/she wants pushing the dolly, and frankly, I was surprised to read that this is really the exception to the rule. The folks who work around the camera have to work together in ways not quite like any other group of people on a film. The operator controls all of the tilting and panning the camera does. And that's one hell of a feat of coordination if you're using a geared head. (Spinning those little wheels to control where the lens is pointed is a lot like rubbing a circle on the top of your head with one hand while patting your stomach with the other...and reciting the Gettysburg Address...all simultaneously.) 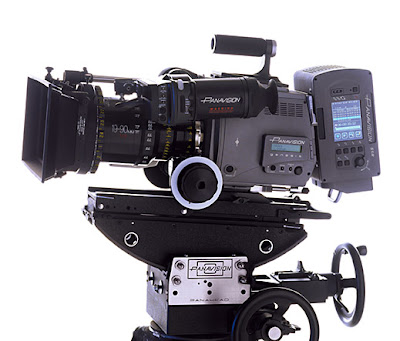 There's someone else pulling focus who has to make sure that regardless of where the actor or the camera moves...the shot is always focused on...well, the focus of the shot. That's kind of important too. And the Dolly Grip is only the guy who has control over pushing a few hundred pounds worth of camera, dolly, operator and assistant cameraman from Point A to Point B; starting at the right time, stopping at the right time and place, moving at the right speed and...oh, yeah...doing all of that really smoothly. Oh, and while he's doing all of that, he's probably booming (making the camera rise or descend) at the same time. I don't know about you, but I'd think the Camera Operator would want a say in who's doing all of that, but what do I know. Go read D's post.

His post got me thinking about the various opportunities Location Managers have for getting caught in the middle of various juggernauts bent on...uh...bending each other. You may have heard filmmaking described as 100 or so folks joyously working toward a common goal; a truly harmonious endeavor in which a universally held vision is heroically wrought from a few dozen written pages into a glorious cinematic event. You may have also have heard from a retired Nigerian official who just wants to borrow your bank account long enough to move $50,000,000 dollars (US) to a safe place so he can share it with you.

Everyone who reads a script comes away imagining a slightly different final product. The guy who drives the generator will have problems with the casting choices. The Craft Service crew will endlessly discuss what a mistake it was choosing one film stock over another. The Greensman will, of course, experience mental vapor-lock over the deeper meaning of various colored carnations for the dinner party scene. (The Director will quickly tire of that discussion and tactfully inform him, "It isn't a movie about fucking carnations and just make sure there are some God-Damned flowers on the table by the time I get back from the can. And God save your ass is they're too tall to see over.")

Location Managers are primarilly focused on satisfying four people; the Director, the Producer, the Production Designer and the Director of Photography. If/when any of these people develop a conflict with any of the others, the Location Manager can find himself in an uncomfortable situation. Disclaimer: The following is based solely on stories I've heard from others. Every set I have ever worked on has been pure sweetness and light and we all loved each other immensely and when the movies were over we all cried because we wouldn't get to continue working together every single day for the rest of our lives and we continue to send each other Christmas cards each year and thoughtful birthday notes and sometimes flowers for no reason at all except to show how much our hearts ache at each others' continued absence.

If you pursue a career as a Location Manager, here are some of the things you may run across (although, once again, thankfully, I've never been in any of these situations).

Every movie is different, but odds are it will be the Producer who hired you. This will cause the Producer to expect a certain level of loyalty. You'll be expected to consider the budget (to the exclusion of all other considerations), during every waking breath. Of course, the Producer wants the movie to be amazing but you'll be expected to show some imagination. Why, for example, are you showing the director shots of an oceanfront resort when his brother-in-law just happens to have a lovely pond in his backyard that can be had for a pittance? Who'll ever know the difference? There's also a breed of Producer who has the ability to shoehorn the current project into the exact same set of parameters used for every other movie he's ever produced -- "I've shot apocolyptic scenes before! Why the fuck do we need to dress an entire city block? Two houses oughta be enough...hell, we can just shoot it in the kid's bedroom and put a wrecked wall and some smoke outside the window!"

Directors run the gamut. Some are totally budget-conscious and will readily make do with something slightly less than their flights of fancy envisioned. Some heavy hitters get absolutely anything they want because their movie is expected to keep the studio afloat in spite of the rest of the drek that's slated for release that year. (Note: Having all the money in the world to throw at problems brings a Location Manager a completely different set of unpleasant issues to deal with but that's a topic for another discussion.) Suffice it to say you probably won't be working for either of those guys. Your Director will make all sorts of happy noises to the Producer and then reject every potential location that doesn't have real 17th-century French chandeliers. Why can't we crash a B-17 into the Empire State Building...it'll look so fake if we do it in post. That shot must be done on Fifth Avenue. On a Tuesday. Without any real traffic or any pedestrians in winter coats.

The Production Designer would never push any agenda except the Director's...except when he would. It's entirely possible to work for months with a Director and Production Designer and be utterly convinced that they were handed two completely different scripts. And Production Designers have two distinct phases they go through during the course of production. During the first phase, they'll walk into a location and gush about how perfect it is. They'll say, "We can walk in and shoot this just like it is!" The actual translation of that sentence is, "We'll need six days to prep it. The whole place needs to be painted (and then aged so it doesn't look like it was painted); the furniture is hideous and it's all gotta go; what's under those rugs? Do you think we can refinish the floors?" During the second phase (when the Producer has lowered the boom and informed the Designer that he's got $32.00 left in his budget and he's not going over), the Designer will reject a location because he'd need to put bud vases on all of the desks. "Can't you find a place that already has the dressing?"

And then there's the Director of Photography. The D.P.'s self-interest usually runs toward satisfying the Director, so you'd think opportunities for conflict between him and the Location Manager would be more rare. Remember that shot the Director wants on Fifth Avenue? The D.P. won't care which day of the week you shoot it. He'll only demand that it be shot at precisely 12:13 p.m....when the sunlight is just right. In spite of the fact that the script calls for a sun-drenched atrium, he'll point out the problems inherent in every sun-drenched atrium you show him, namely that the sun will be moving all day and it'll be next to impossible to control the light. "It really would be better to shoot in a place without so many skylights!" And whenever there's a night scene, the D.P. will want lots of ambient light. The script may call for the two lead characters to fumble over their first kiss at the door to her quaint brownstone house, but the D.P. will want the quaint brownstone surrounded by quaint stores and restaurants...that all keep their lights on all night so you can shoot til 4:00 a.m. (The unfortunate wrinkle that residential and retail properties usually aren't intermixed like that isn't his problem.)

If you happen to get hired on a job where any of the above-mentioned folks have conflicts with any of the others, I wish you luck figuring out which one you're working for. It may have been the Producer who hired you but any of them can get a call when you're being checked out for your next job. Having any of them refer to you as "that asshole" will not bode well for your prospects.

Yeah, and I've only worked for clients who understand the delicateness of type selection and have their Pantone numbers ready when they start talking color changes. And they totally know what they want, how they want it, and can dictate those parameters clearly up front so there's no dicking around with 18 proofs.

Somehow, me so not with the believing you part.

You know, it always astounds me how much detail goes into making a 90 minute movie.

Also, I can now read the credits and have a halfway vague notion of just what all those people actually do.

So, cool. Thanks, Nathan, I dig it when you explain movie shit to me.

I looooove all of my coworkers---all the time. I swear it.

So now you read the credits and try to figure out how each person tried to do someone else's job?