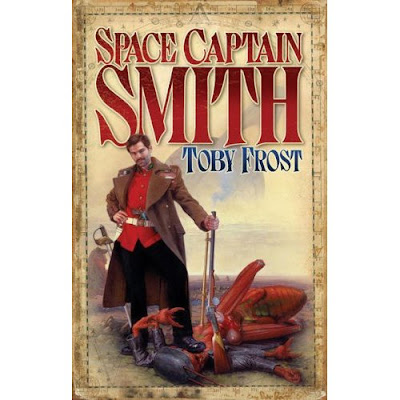 In the 25th Century, the British Space Empire is on the verge of war with the evil and somewhat disgusting Ghast Empire, an alien race bent on the destruction of all humanity. In a marriage of convenience, the Ghast are allied with the Republic of Eden, a collection of religious zealots bent on the destruction of Godless heathens. The marriage is not an especially happy one.

Enter Captain Isambard Smith. He is assigned the light freighter John Pym and ordered to pick up and deliver Rhianna Mitchell to his superiors. His crew consists of an escaped simulant as his pilot and his friend, a homicidal alien who collects heads and has long conversations with his spear.

The book is a clever mix of Science Fiction and SteamPunk, but doesn't dwell heavilly on either. You won't get long involved explanations of how their technology works because none of the characters understand it either. They mostly know which buttons to push and which end of their weapons to point at their enemies. You know it's SteamPunk because their weapons mix involves both lasers and elephant guns with thyroid conditions. They don't go to the galley or to the crew rec-room because their ship has a kitchen and a comfy living room.

Smith is an Edwardian Englishman, possessed of all the arrogance and nationalism you'd expect. He's also a complete neurotic, crippled by his upbringing. Am I making this sound less than fun? Well it is...fun.

Space Captain Smith is filled with dry British humor and double entendre. It's a romp through space just begging to be compared to The Hitchhikers Guide to the Galaxy, with enough Monty Python and Terry Pratchett thrown in to keep you laughing throughout. Better still, it's the first book in a series and the second one is out: God Emporor of Didcot.

This book is the first by Toby Frost and while it may not quite hit the heights for which it aims, you can't fault its aspirations. I'm looking forward to reading the second installment.
Posted by Nathan at 8:17 PM

I got burned out on Naomi Novik's books but hers weren't humor at all.

At first glance, that picture looks remarkably like the guy is holding a trombone on top of a court jester.

"At first glance, that picture looks remarkably like the guy is holding a trombone on top of a court jester."

I think a blunderbuss trombone would be an excellent weapon. A little tough on the mouth, but I played baritone horn, so it's not a problem for me.