My neighborhood has been steadily gentrifying in the 14 or so years my GF and I have lived here. With gentrification comes...new stores. One of our new neighbors is a Walgreens that moved in sometime in the last year. In fairness to Walgreens, there wasn't a suitable site for them in the neighborhood before their new home was built; there just wasn't a vacant space large enough, so I won't accuse them of, oh...showing up here just because there were suddenly white people here.

In spite of gentrification the Ft. Greene section of Brooklyn continues to be more racially mixed than a lot of other neighborhoods with a noticeable cross section of people coming in all shades of black, brown, yellow and white. We're all happy to have a store like Walgreens in the neighborhood. Disclaimer: I'll continue to go to the little 'Mom-and-Pop' pharmacy a 1/2 block away because they've always been really nice to us and I'd hate to see them put out of business by the competition. But OTOH, I don't mind having a place to buy toothpaste that doesn't have the label printed in four languages.

I was a little taken aback by the sign posted at Walgreens' entrance when I stopped by there the other day. Take a gander at this. 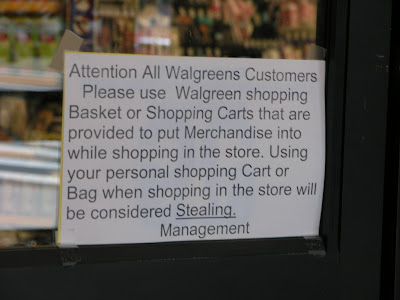 Now I've mentioned before that Walgreens isn't the only store in the neighborhood that doesn't want you shopping with your own re-useable bags. But the grocery store just asks you to check all your bags at the counter before you start shopping. And, true -- they do have a 'wall of shame' with pictures of people they've caught shoplifting (all labeled Thief!), but somehow, none of this seems quite the same as telling every customer who enters the store that they're suspects to begin with. Something about it just seems a little -- crass?, insulting?

Anyway, I know Inventory Control is a problem for stores everywhere and I really would like to do my part to help Walgreens. I know it's hard keeping an eye on all of us potential thieves -- pre-guilty? I intend to make things easy for your staff by just staying out of the place.

BTW Walgreens Peeps, I'll admit I haven't been into many (any?) of your other stores lately, but is this sign your standard welcoming banner? Maybe you want to rethink the policy a little -- or at least the wording.

Update (sorta) 7:45 p.m.: I was waiting to see if Walgreens has anybody who searches the internet for mentions of them, but no joy as of yet (including anything obvious on my stats). If nobody from there shows up in the next day or so, I'll forward this to somebody in their corporate evil lair offices.
Posted by Nathan at 11:39 AM

We're hip-deep in Walgreen'ses here and I've never seen a sign like that. I get most drug store stuff at the grocery anyway, where they don't care what reusable bags I use (we just toss 'em, folded up, in the cart and get to shoppin') and I earn percentage points off gas!

I've never seen that sign in my Walgreen's, either. Of course, our suburb couldn't be more white, which may have something to do with it.

I would think indicating that their store policy requires that you "check your bags" or some other sign that doesn't implicitly accuse you of stealing would be a better fit if they had any intention of keeping their customers...

I haven't seen that at any Walgreen's here in Minnesota, either.

That sign is just stupid, the same stupid as DRM. It treats customers as a priori thieves, will reduce the amount of traffic in that store. A few years ago I was in Nashville at the NAMM convention (a music merchandising convention), and one of the presentations featured a gentalman showing how small mom-and-pop stores could comete with the "big box" stores like Best Buy, Wal-Mart, etc., complete with case studies of those who were doing so.

One of the things he stressed was to get rid of the signs saying things like "shoplifters will be prosecuted" and saying how much will be charged if you bounced a check. He noted that these signs are not going to stop shoplifters, people who write bad checks, etc., and insult your honest customers. He cited studies showing that such signs both reduced the amount of foot traffic to stores, as well as reduced the amount spent in the store, often causing people to leave without spending a thing after they saw the signs.

Many stores in my area urge you to use reusable bags, and will sell you such bags if you don't have them.

Ask that your bags be checked or that only empty bags be allowed in the store? No problem. Signs like that one? It will guarantee I never shop there.

Nope, not at my local Walgreen's, which is a ten minute walk from my place. My neighborhood is predominantly Armenian, including most of the people who work at the various stores. I don't think that means anything, quite honestly.

As others have said, a "Check Your Bags" policy would be perfectly acceptable. I tend to prefer that anyway, since I hate lugging bags around a store.

I don't go to Walgreens much but I think that is fine if they request you to check your reusable bags as long as they let you get it during check out instead of using plastic bags. If they didn't allow that, I'd be seriously dissapointed, I mean hello green? In NJ where we have a house, there is one being built in a small town called Greenwood Lake. It looks all brand new, I hope it doesn't put the mom and pops out.

Personally, I think I'd prefer to do my stealing in a more friendly environment. Just sayin'