As Usual, I Don't Care About The Part You May Think I Care About.

LEAVENWORTH, Kan. – A bomb squad used a disrupter gun to blast a suspicious package left on the counter of the Leavenworth post office, but only a Bible was found inside. Police said the person who left the package on Friday night took off in a hurry and probably didn't put enough stamps on it to get it delivered.

The woman to whom the package was sent to said she was expecting something from a relative who had been acting a little strange. But she had no idea what it was.

The package and the Bible were taken as evidence.

You'd could be forgiven for imagining any of those things. But you'd be wrong. "What else", you may be asking yourself, "in this tiny little article could have Nathan all worked up?"

Only the apparent FACT that the Leavenworth, KS Police Department is FROM THE FUTURE! They have DISRUPTER GUNS!!1!l!lll!!!!! Holy Crap! How have I not heard about this?

I did some extensive research (O.K., I googled it), and this is the only disrupter gun I could find. And while I'm sure it makes a nifty accessory at cons and stuff, I have my doubts about its actual efficacy when it comes to suspicious bible blasting. 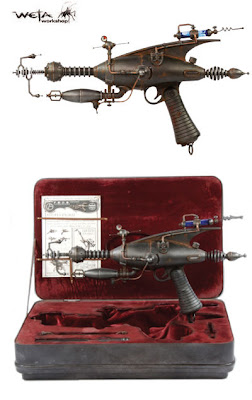 Somebody knows something and they damned-well better start talking -- and I mean pronto! Next thing you know, they'll be trying to tell us the moon-landing was real!
Posted by Nathan at 10:39 AM

Klingons use disruptors as well, which is precisely what I thought when I read that line, "Cool! Klingon technology! I want a cloaking device!"

There are other matches for disrupter gun, but they seem to deal with tasing, or use against living creatures. Now I really want to know what this gun is that the Leavenworth PD has in their arsenal...

Sorry Nathan, it's much more prosaic.

I think it was developed by the Brits:

The bomb is blown apart using one of the most significant weapons in the bomb disposal arsenal: The Disrupter. The Disrupter was particularly useful for destroying booby-trapped, under-vehicle bombs.

PETER GURNEY: Initially, when the current campaign started, the only tool the bomb disposal operator had was really a Stanley knife, a few hand tools, a ball of string, and some detonating cord. But this, of course, meant you had to be with the bomb while you were defusing it, which is not a good idea. And we did lose quite a few operators. And then, along came the idea of knocking the bomb apart. This technique was called disruption.

SIDNEY ALFORD: Whereas most guns will be firing a solid projector, in this case, the barrel is filled most commonly with water. And if we put that in the vertical position—

PETER GURNEY: Let me hold it for you, why not.

SIDNEY ALFORD: Thank you very much. Once it's penetrated the case of a bomb, the slug of water which it projects bursts in all directions, and it tends to burst the bomb open from the inside. The idea, remember, is not to set the bomb off. It's to knock it apart, so you can gather up the components, but not to cause the bomb itself to explode. And out comes the pin.

Damn, JTS beat me to it, but further information can be found in these articles:

You bastards spoil everything. I suppose you've got some light-saber specs too, huh?

NO! I refuse to believe you John! It's a Klingon weapon, damnit!

I'm with Nathan and Michelle. John and Vince can say what they want, but we all know that a gun that fires water is called a squirt gun, not a disrupter.

For the scientifically inclined, a disrupter such as the one in the illustration Brother Nathan linked to fires an incoherent directed multiphasic interspatial ether wave at the target, resulting in partial or complete disatomic phase transitions at mHz frequencies above the discontinuous quantum spectra. Depending on the dissipation of the beam and the precise bandwidth dialed, effects can range from lightly toasting a marshmellow (indeed, Her Majesty's Royal Lavinia Planitian Hussars 103 Corp sometimes used their disrupter rifles to warm their dinners when they were embedded in the swamps during the late colonial conflict against those scaly Mucker crawlies) to nearly disintegrating a lesser Martian crumbleworm (up to 50M in length at least, and you don't want to use a personal disrupter against a greater crumbleworm--their carbon monomolecular hides are harder than diamond and anything smaller than a carriage-mounted widewave subatomic disperser is just going to tickle one of the bastards and invite it to lunch, yourself being about right for a hors d'oeurves).

Rumor is that the Belgians may have sold several crates of disrupters to the Europan longclans, which doesn't bode well for our boys' engagement out there; there's a good article in the latest Harper's Weekly suggesting that if we can't get a foot planted out there, all the Belgians will have accomplished is handing another colony over to the bloody Czar of Russia. If the President has any sense, he'll take up the Japanese Emperor's offer for assistance from Tenth Imperial Fleet ships deployed from Titan (they could be there in six weeks under full aether propeller), even though it would be a hell of a debt to pay off and we might have to concede Mimas. (But honestly, what's Mimas offering us besides bloodslug infestations. That's not a place to put a colony, even if there is a tantalum lode right there where even a Mucker could scrape it up.)

The disruptor, or phase disruptor, is a type of directed energy weapon in common use among many non-Federation races in the galaxy including the Andorians, Borg, Breen, Cardassians, Cravic, Dominion, Ferengi, Gorn, Klingons, Lysians, Pralor, Remans, Rigelians, Romulans, and Vidiians.

Lysian destroyers were armed with a disruptor weapon system that had a capacity of 2.1 megajoules. (TNG: "Conundrum")

The Cardassian outpost on Korma used "system five" disruptors for its planetary defense weapons. Although never designed to operate aboard a moving spacecraft, one was modified to be used aboard the Cardassian military freighter Groumall in 2372. (DS9: "Return to Grace")

In 2374, disruptor bursts from Jem'Hadar soldiers left anti-coagulants in the systems of those attacked by such a weapon, usually causing their victims to suffer and die from the loss of blood. (DS9: "Change of Heart")

Romulan disruptors leave behind residual antiprotons when fired that remain for several hours. (TNG: "Face of the Enemy")

Yay disintegrating of bibles! Or disrupting. Or drowning. Whatever.

"The woman to whom the package was sent to"

"to whom the package was sent" is correct. The "to" at the end is redundant with the first "to."

Okay, I for sure thought you were going to go for the:
"... said she was expecting something from a relative who had been acting a little strange. But she had no idea what it was.

The package and the Bible were taken as evidence."

Read this as one continuous thought.