People who aren't from NYC or haven't spent much time trying to park here could be forgiven if they have difficulty deciphering when, where and whether or not they're allowed to park a car. Except you won't be forgiven -- not at all. You'll get a hefty ticket and you'll contribute to our city's much need needed revenue stash. We all thank you for your confusion generosity. 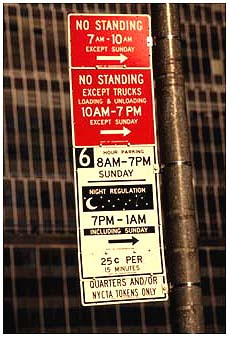 A couple of weeks ago, the city started changing the rules for street cleaning in my neighborhood. Now, instead of having to move your car twice a week for street cleaning, we'll only have to do it once. We like this! So, in preparation for the new rules, all of the old signs were replaced with new signs.

Here's what went up across the street from my house. The shots from left to right depict the signs in order from North to South.

First sign...Easy enough. You can't park anywhere between the northern corner of the block and whatever the next sign to the south is between 7am and 4pm on school days and (supposedly) even folks with Dept. of Education placards can't park there between 8:30am and 1:00pm on Fridays for street cleaning.

The next sign to the south seems to continue the street cleaning regulation for the rest of the block and to close off the section that's reserved for Dept. of Education folks. If you look further down the block from this sign, you can't even see what the next sign down the road is. You have to walk a few hundred yards to find the next one...which tells you they were just kidding about having "closed off" the section reserved for Dept. of Education Folks.

You might be forgiven for thinking you could park in the space immediately south of the second sign...except that you wouldn't. You'd be given a ticket for somewhere between $65 and $115 for parking there. If you left the car there with the ticket on it long enough, you could also get towed and get to pay an additional $185 for the honor of letting the city move your car. (If you don't want to pay the city for towing your car, you're welcome to leave it in their care for a while at a cost of $25 per day storage fee. Then you can get it back if you wish, but that's not gonna happen until you pay the towing fee, the storage fees and any outstanding tickets you may have.) Once again, we'll thank you for your confusion generosity.

As long as we're on the subject of putting up new "No Parking" signs, here's another little wrinkle to throw into the mix. I've mentioned that I live in a neighborhood that's officially Landmarked. This means, among other things, you need special permits to replace your sidewalks and you can only do it with approved materials. In my neighborhood, you have to use a type of slate called "bluestone". Even when you're doing everything right, the permit process is a pain in the ass.

The city, on the other hand, doesn't have to follow their own rules.

A year or two ago, my neighbor went through this heinous process and put in a brand new bluestone sidewalk in front of his house. It looks nice. When the sign guys came by, they decided there weren't enough sign posts on our side of the street so they added some. In the case of the one in front of my neighbor's house, the sign-guy took a big honkin' 8'-long crowbar and proceeded to bash the shit out of one piece of bluestone until he had a large enough raggedy hole to use his post-hole digger. After he put up the sign, he slapped in some concrete to finish the job. 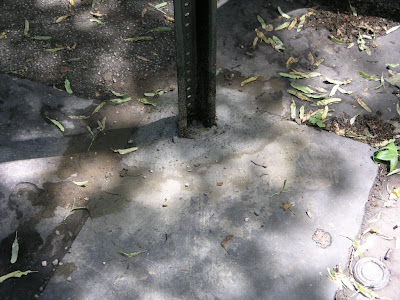 (Sorry, it rained last night and I didn't feel like sweeping my neighbor's sidewalk just to get you all a prettier picture.)
Posted by Nathan at 12:26 PM

And you said you weren't good with math.

Dude, seriously, I'd be like fucking Crocodile Dundee if I had to live there. You might as well be speaking Swalhi or something.

Here in Atlanta we have fairly simple rules for intown on street parking, meters in some places, the usual. However, when the city started cutting budgets the first thing they cut was the parking enforcement folks. On-duty police, who are actually working and not furloughed, may issue parking citations, if they have time.

Street crimes, as well as other crimes, have gone up appreciably since the budget cuts started. The criminals KNOW these things! So if I see an APD officer writing a ticket for an expired parking meter, I'm gonna be pretty pissed off!!

When we lived in Western New York State, I remember the rules that Buffalo put in place for snow plowing. They armored the plow blades, told the drivers to get up to speed and not swerve for any vehicle left illegally parked. By law, the insurance companies were told they didn't have to pay for cars sliced in half by the plows.

No one illegally parked during snow storms.

Oh man, don't get me started on NYC parking. I'm sick as a dog and had to make a 3/4 mile sprint to the parking meter in Chinatown yesterday because my wife forgot to tell me what time it was. Made it, though.

And it looks as if the moratorium on filming in Chinatown has been lifted, because I nearly ran into a film crew unloading shit and blocking the sidewalk with their carts. Fuckers. :p

Someone (and I won't say who), who lives in this house with me, (oops), got ticketed and towed so many times when she first moved to NY, that I went from feeling pained sympathy to just having to laugh. Eventually, the signs started making sense.

How stupid is that? Enforcement folks more than pay for themselves. I think they may be the only people NY is hiring at the moment.

I actually don't have a problem with that.

Nathan-
Well, no one ever said gubment was smart. The city council only saw that X dollars were being used to outsource parking enforcement, and cut the contractor. Said contractor has both public and private contracts throughout the metro area, and is VERY efficient at their job. The city's loss.

I suspect in the future when the city gets around to asking for bids for these same services, the prices will be considerably higher. Budget management my ass.