I've talked about NYC parking before but I don't think I've ever gotten into the insanity that is Alternate Side Parking.  ASP is when they clear one side of the street for an hour or an hour and a half for street cleaning.  It used to happen twice per week for each side of every residential street.  Recently, they've been changing over a lot of neighborhoods to once per week. People are happy about the change, but it's really that the city couldn't afford to sweep that often, not that they were trying to make things easier on everyone.

So, anyway, legally, it's quite simple; when it's time for ASP, you have to move your car.  In reality, it's confusing as hell.  If you live on a block with a school, a fire house, a police precinct or some other thing I haven't thought of, you just need to get your car out of there for the hour and a half.  If you live on a residential street in Manhattan, odds are that you can sit in your car double-parked until the street sweeper passes by and then everyone moves back over the the illegal side of the street in a beautifully choreographed performance.

In my neighborhood, you can usually just double park on the other side of the street and you don't have to sit in your car waiting, but if you see the street sweeper go by, don't think that means it's time to move your car back.  Here, they care about the times on the street sign; not whether or not the street got cleaned. 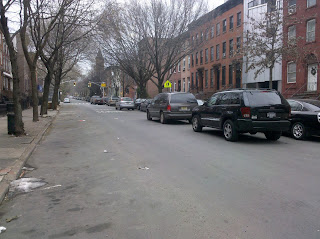 Most people leave a note on the windshield with their phone number in case the guy you're blocking wants to drive away.  It's all very civilized.  But remember, this is just something that doesn't get enforced in certain neighborhoods...you can still get a ticket for double parking if some cop has a bug up his ass.

Here's where it has recently gotten interesting.  The city has put in a bunch of bike lanes all over the city.  In the shot below, the car on the right is legally parked for the day.  Then, there's the bike lane.  Then there's the guy parked in the middle of the road (and the cops won't bother him).  That blue car on the left in the distance?  He got a ticket...cause he's on the side that's illegal (as opposed to the middle which is only sorta-kinda illegal but wink, wink). 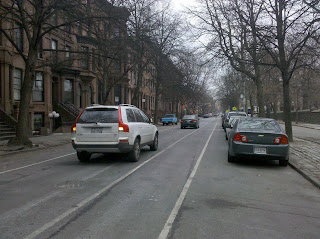 I know it all makes sense, but it just looks really retarded.  It looks even more retarded when the street cleaning rules end.  Then you have everyone driving this serpentine path down the block because nobody moves their cars out of the middle of the road at the exact same time. 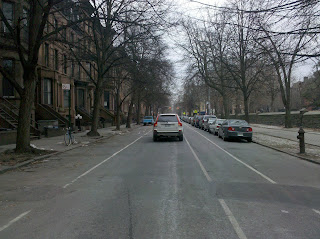