Massive Book Haul and Other Stuff!

Today I received my swag from Michelle's annual Great Book Giveaway™.  Color me thrilled.  I haven't read any of these! 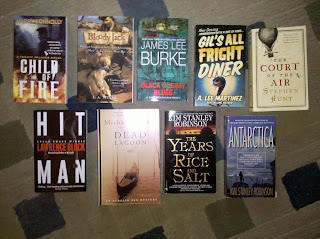 Yes, I sent something back from Michelle's Amazon Wish List, but I'm not telling you what.  That'd spoil the surprise.

Also, I didn't mention it, but I had lunch with John The Scientist the other day and we ate really good NORMAL FOOD!  We went to a Korean Barbeque in Flushing (that's Queens).  I told John to do the ordering since I really didn't have a clue what most of the stuff was.  When the waitress came over, John started ordering one item and before he could get it half-way out of his mouth, she pursed her lips and said (in really broken English), "No, no...'murikins doan like that!"  I kind of smirked and realized I was being protected by the Gods-of-things-it's-really-OK-to-eat.

First they bring out about 8 appetizers in little dishes, mostly pickled items...some spicy, some in soy paste.  One of them was Kimchi, but that was the only one I didn't like.  Then they come to your table and grill the chicken and beef we ordered on a brazier at the table.  As we began eating, the waitress pointed at a basket of broadleaf lettuce and said, "Make a taco!"  I got a kick out of that little cultural juxtaposition.

Anyway, we had a really good lunch and then went shopping at a Chinese Supermarket so John could show me what the next beneficiaries of his largesse (i.e. unwitting victims), would be receiving.  I'm pretty sure they'll be surprised!

Hope you enjoy your loot!

Got my books Thursday. Despite the mail carrier's best efforts at package destruction!

Bag of disgusting ick, especially from Asian markets, can be very interesting and quite tasty.

Warner, Michelle's a heathen, there's no use talking to someone who throws away perfectly good swallow's nest soup.

I did NOT throw away the soup.

I gave it to my GA, who had a friend who wanted it.

The good news is that John's next victims will definitely not throw away their gifts.

They might, however bury them really deep, salt the earth so that nothing ever grows there again and then pave over the area.