Hello Everybody! Didja Miss Me?

I've been out of sorts the last couple of days.  To be perfectly honest, I may have treated it (i.e. given myself over to being incapacitated), a little more than it warranted, but let me publicly state that Anon GF, was solicitous throughout and never once said anything remotely like, "Man up, ya big baby."  Thanks Anon GF.

So anyway, on to a few other things.

1. I missed two days of posting the beard growth, but there's a new pic up today.  I'm not putting a link here because there's a link that'll stay at the top of the page until I'm finished with all of this nonsense.  Besides that, this is my first real post since starting the whole thing, so you could just scroll down a little bit.

2. I'm really enjoying the whole Leno, O'Brien, Letterman  HooHa!  I'm not a big fan of Leno's (I rarely ever watched him unless he was doing Headlines or Jaywalking).  I thought most of his show was pretty lame and it only got lamer at 10 p.m.  (That and I had a personal aversion to giving NBC any ratings at 10'oclock for putting a bunch of writers and directors and crews and actors out of work by doing a cheapish talk show instead of a scripted drama.)  Anyway, I don't have much to add to the whole thing except that Leno and O'Brien both come in after Letterman and Craig Ferguson in my book.  I think CBS will be enjoying the outcome of this one for quite some time.

3.  I don't have a whole lot to say about Haiti, though it's on my mind.  A friend of mine has family there and hasn't been able to get any information about them since the quake hit.  He's not even sure they would have been in Port Au Prince, but reminded me that the whole country is smaller than Maryland, so it might not make any difference.  Anyway, if you're the praying type, please spare one for Jean's family.

I won't get into the whole Pat Robertson debacle since I'm sure you've all heard about it already.  The man's a moron and I can't fathom why anyone expects anything different from him now.

Rush Limbaugh also managed to be an utter douchebag about the whole thing.  Not only is he pointing out that every American is already donating to the cause through their tax dollars (which is true considering the tonnage of Navy ships on their way there), but also questioned the White House's motives in posting links to organizations where you can make donations.  I'm not sure where he thinks the White House may divert those funds, but he's suspicious, nonetheless.  Watch the video on HuffPo.

Here's a suggestion for Limbaugh's fans if they're not comfortable using a link from the White House...How about using Wyclef Jean's foundation?

4. HuffPo also (of course) has Sarah Palin's appearance with Bill O'Reilly from Tuesday night.  I'll be honest.  I couldn't watch the whole thing.  Complete waste of time.  Here's the thing.  Those two are so polarizing that 99.9% of people fall into one of two camps...the ones who believe that everything those two say is gospel and the ones who think everything they say is the misguided, ignorant, bigoted, reprehensible talk of a crapweasel.  (I'm with the crapweasel side of things.)  So the only thing this does for me is make me think I'd better find some people with whom I disagree some of the time or maybe I'm being just as blind as her nitwitted followers.  We can't have that, now can we?

5. This is a picture of someone eating a Gyro. 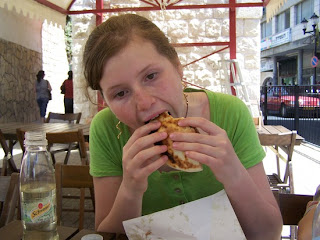 This is what the meat for a gyro looks like before they shave it off to make you your delicious gyro. 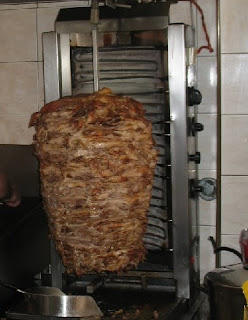 It can be lamb, beef, chicken (or in heathen lands -- pork).  It's yummy.  But the problem is:  How to pronounce it when you're ordering it.  If you're in Israel or most Middle Eastern countries, the answer is simple -- you order schwarma. Ha, ha...got ya there.

No, I'm talking about how to order it here in the good ole USA.  The Greek way to pronounce it (and they're the ones who brought it here) is Yee-row.  That's where we got the Hero sandwich from. 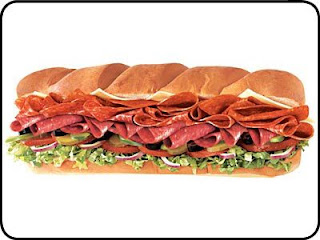 Other places call these sandwiches (which are not gyros) Submarines, Hoagies, Po-boys and Grinders. (If you know another name, please fill in the gap in my knowledge of truly trivial things.)

The problem is, at least in NY, most of the places that sell gyros are run by people who aren't Greek.  They're Italian and Dominican and Guatemalan and practically anything but Greek.  So, when I walk in, I can say Yee-row as long as I want.  But they're just gonna stare at me as if I'm speaking Greek until I say Jye-row.  I hate the idea of pronouncing things wrong, but I also really just want my gyro.  They're tasty!

Just this month I found a restaurant called Shawarma King. I suspect it's a chain, but the food I've tried so far is awesome. :) Aside from lamb, beef, and chicken, they also offer turkey and shrimp shawarmas.

Oh yeah, I forgot, I'm a Christian and Pat Robertson is a jackass. It really pisses me off when these idiots say stuff like this. Please forgive him, he knows not what he does. He's a moron.

I can't believe how many times I've done the yee-ro talk. Sigh. I live in the cultural backwater of the midwest. But on the plus side, the majority of our gyro sellers are greek. And they do it with spiced lamb. Mmmm, cucumber saucy!

D. I would forgive him, but forgiveness requires honest contriteness. Pat hasn't met that minimum bar, yet, and I doubt he ever will. So until that time, he is a 'tard and he's giving the other Christians a bad name. Time to vote him off the island.

[Wonders if he should grow a beard as well if only to check the percentage of gray hair.]

I did miss you, actually. But in a completely UCFish, platonic-trollop kind-of-way. Thanks for taking good care of the Nathan-Man, Anon GF.

I LOVE SCHWARMAS. It's the only way I'll eat baby animals. I started eating them from roadside stands when I was in Jebel Ali for a hundreds years one summer, where they are actually made with lamb. Cucumbery goodness, indeed.

Now I get them from the Greek places at Food Courts where I suspect the mean is NOT lamb. And I'm okay with that, actually.

Here in Colorado, it's pronounced "Gee-Ro." But I like the name SCHWARMA much better. It's fun to say! SCHWARMA!

I love schwarma, I love gyros, I love falafal - can't get any of it in Alaksa. Moose chili though, plenty of that.


Robertson is a douchebag of simply extraordinary proportions. Like I said on Twitter, his personal God is a complete asshole.

In Chicago, your Greek grease holes are actually managed by Greeks. But they don't mind if you say Geeros or Yeeros.

I love saying hoagies. Too bad most of the places don't actually sell Hoagies but mere sandwiches.

Nathan! Hey, okay--I know who you are now! Say, why don't you do those word association games on Wednesdays anymore? Those were fun!

Turkey I can see, but shrimp schwarma? How do they get 'em all up onto that rotisserie?

I gotta go with Steve on that one. Pat's been a consistent douchebag forever and recall any hints that he thought he may have ever done or said anything wrong. No forgiveness from me. (Not any great expectations either.)

By all means, grow the beard! Just post your progress.

And Jim's getting Scwarma for next Christmas!

Last, but not least, Konstantin,

The reason you can't get a Hoagie in Chicago is that you can only get Hoagies in Pennsylvania. I don't care who makes it, it just doesn't work that way. Think of it this way: If someone in Philly makes a Po-boy -- it's really a Hoagie. These are just laws of nature.

That would be me. :D

But I'm 100% with you on the crapweasel thing, we'll have to find something else to disagree on.

How about lunch next week? :D

I'll get some shrimp schwarma next week and watch the kitchen carefully. ;)

I want a picture of the shrimp on the turning spit. I'm really curious how that works.

I don't think I've ever had a gyro, mainly because in my meat-eating days that mass o' meat just grossed me out, plus I never ate lamb (or any other baby animals).

(It's pronounced Yee-row out in L.A., but most of restaurants that serve such things are owned by Greeks or folks from Middle Eastern countries.)

Falafel, though? Yum! Oh, how I love falafel and hummus and tabouleh.