And Here I Am...Back Again.

I've been meaning to mention that I've connected another strand on the UCF Hairball.  Yesterday, I had lunch with Tom (he of Snavely fame).  That makes 4 UCFers I've now met in person.  It was a most excellent lunch followed by a tour of the neighborhood. (Tom came into Brooklyn since he's visiting out on Long Island right now.) With the possibility of a trip to Seattle on the near horizon, I may be adding a few more really soon. 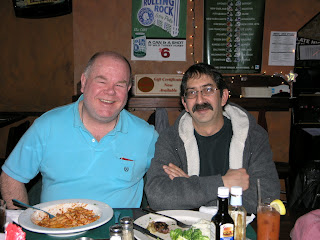 OK, this next part may not seemed connected, but just stick with me for a minute and you'll get it.  Immediately after 9/11, NYC began putting up various barriers around public buildings (because someone might hijack a 787, but not know how to fly it, so they might taxi all the way to their intended target and...)  Anyway, I suppose it was excusable that, as often as not, they put up a bunch of ugly Jersey Barriers around these buildings.  One presumed that it was a temporary measure until they could come up with something more permanent.  One presumed wrong. 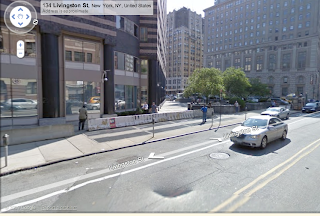 Here's another spot in Brooklyn.  In fairness, I think there's some construction going on here.  The Jersey Barriers used to be approximately where that orange snow fence is, so maybe they are putting in something more permanent (and attractive?) here.  Either way, I'm still a little pissed that they've left it looking like shit for more than 8 years. 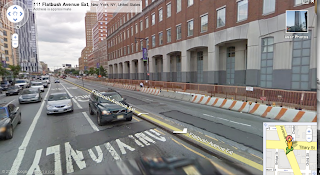 So, anyway, when Tom was getting ready to head back out to the Island, I walked with him to the Long Island Railroad station.  There's a brand new one in my neighborhood that just opened recently.  Get a look at that. 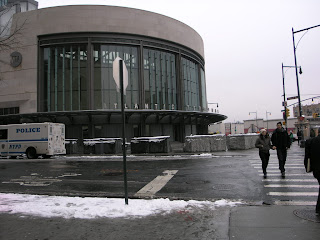 This is new construction.  I'm guessing that they've known they'd want some sort of street level security devices beginning sometime very early in the design process.  And this is what they came up with.  Here's the thing.  There are other places in town where they did just randomly drop a bunch of massive stone blocks.  This isn't random...it's how they designed the fucking place.  I was too lazy to go get you shots of the other side of these blocks, but most of them have benches cut into them on the other side (if you can call a flat spot on a slab a bench).  And it's not obvious from the pictures, but these don't even line up in a well-placed arc.  They really do look like someone dropped them there in a hurry because they just thought of it. 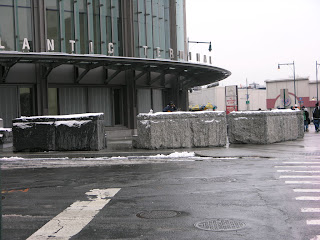 I've gotta think that building this type of thing into new construction would be an element of design that's being taught and practiced these days.  If this is the best they can come up with, there's an opening in the market for someone who can do better.

And one last thing.  I may have mentioned that most of the delis in my neighborhood are owned by Arabs of various origins.  I don't like to stereotype (yeah, right), but whenever you walk into any of these delis, you'll find the guy behind the counter talking on the phone.  Most of them barely acknowledge you as they take your order and your money.  Today I walked into one of the neighborhood delis and discovered that the 21st Century has reached Myrtle Avenue.  In this store, they've ditched the cordless phone in favor of a laptop mounted over the counter...with a Skype call to Lebanon in progress.

Which lets me remind you...Welcome to the future.  Don't fuck it up!
Posted by Nathan at 5:17 PM