U.S. Postal Service Hates Hannukah. And Christmas. Or Maybe They Just Hate Me! (with an update).

Anon GF gave me a Barnes & Noble Nook for Hannukah (and/or Christmas).  When she ordered it, we both knew that it would be on back order and wasn't supposed to ship until February.  Hey, I could live with that.  I was getting a Nook!  Tres excitement.

As time went by, I found myself growing more and more excited about the eminent arrival of my Nook. Anticipation really can sweeten  things.  I was positively salivating at the thought of my Nook's arrival.  Imagine my pleasure and surprise when an email showed up telling me that they were shipping it EARLY!  Yup! They were sending it out on January 22nd.  YeeeeeeHaw!

And that sucker was making it's way toward me faster than I could update the tracking site. 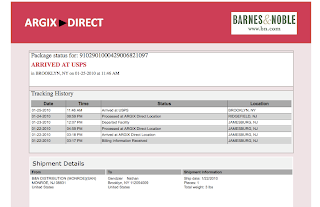 -The shipping company received the billing info at 3:17pm on 1/22/09
-ONE MINUTE LATER it arrived at their location. (I'm guessing this means that a.} somebody entered a keystroke on the computer and 'removed' it from inventory or b.} they have some poor schmo chained to each shelf and whenever they 'process' an order he gets a shock from a cattle prod and drops one item from his shelf onto the conveyor belt. Modernization takes many forms.)
-24 hours and 41 minutes later, my Nook was 'processed' at their facility. (OK, maybe this is when the cattle prods came into play.)
-Another 20 hours and 8 minutes later my Nook departs their facility...from less than 50 miles from my front door.
-8 hours and 51 minutes later, it's getting closer to me.  It's a mere 19 miles from it's new home.
-9 hours and 47 minutes later, it's been handed off to the U.S. Postal Service. It's now, presumably, at the Main Post Office in Brooklyn for sorting to my local Post Office.  (So what if there's one more step before it gets put on a truck headed to me; it's less than one mile away.)

You'll note that the private shipping company has taken three days to get my Nook to within a mile of me and they've made progress every day!
But now it was in the hands of the U.S. Postal Service.  Argix put up a helpful link to the USPS website so I could continue to track my Nook's travels.

It's now exactly 4 full days since Argix gave my Nook to the USPS. 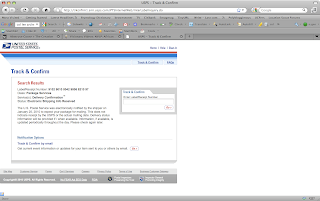 The USPS continues to acknowledge that they're aware of the alleged existence of my Nook, but that's as far as they're willing to go.

The USPS hates me.

Update:  My Nook arrived at 12:57 p.m.  WooooHooo!
Note: This means that the private shipping company moved my Nook toward me at the blazing speed of 0.843 miles per hour while the USPS moved 74.63 hours per mile.

They've obviously been talking to your local Domino's Pizza...

Don't feel bad, you're not the only one. The USPS has hated me for years at several different addresses and post offices serving those addresses.

OH, and holiday cards...had one returned last week, more than a month after it was sent. The envelope was so mangled there was almost nothing left of the recipents address, just part of the name. Hand written even because several friends here complained the mail sorting machines were ripping off address labels.

And for this abuse we pay EXTRA!!

The USPS hates everybody, but nobody more than themselves. Look behind the counter of any US Post Office and the self loathing and depression are almost physical manifestations.

Speaking of suck, Neurondoc, there's an article in Time Online today about how Domino's admits that their pizza sucks. It doesn't really bother them, delivery time is their thing, quality a distant second - not that that shows or anything. The question is, of course, if you live in NYC (land of arguably the best artisan pizza in the world) why in the fuck would even think about ordering from Dominos?

"The question is, of course, if you live in NYC (land of arguably the best artisan pizza in the world) why in the fuck would even think about ordering from Dominos?"

Well, because you're a heathen who can't even appreciate fine ethnic cuisine such as tso dofu? :D

I saw that Time article and immediately thought of Nathan. I haven't eaten Domino's pizza since I was in med school, so I can't speak to its quality. I have never eaten a Pizza Hut pizza. I grew up in the NYC area and am a firm believer in a good thin flexible doughy crust, not too much sauce, and globs of provolone and mozzarella. Not the part-skim kind. With mushrooms, sausage, or pepperoni. Or all three.

Weird pizzas like barbecue chicken and goat cheese with fennel just weird me out.

Does this count as a post-hijack?

I'm not really sure that posts can be hijacked here. Staying on-topic is the aberration.

But knock yer brains out trying.

Also, unrelated to the above, Wendy's comment reminded me that I'd forgotten to pay rent yet. o.) So, thanks for that. And also the Christmas card you sent (which I've not yet gotten around to acknowledging elsewhere, because I'm retarded that's why...).

Unrelated to the above, I'm having some Domino's Pizza right as we speak. :) The people who work at the one around the corer also look like they like their jobs, and the turnover is low.

It sounds like you're living in
Bedford Falls or some other lovely fictional town.

And haven't you heard? You can't say retarded any more. Jeez what a retard.

So.. how is the Nook? I'm interested, but I've heard mixed reviews.

I like reading on it, but I'm still figuring out some of the features. I'm supposed to be able to load ePUB documents and PDFs from anywhere, but I haven't quite figured that part out yet.

(I may have to read the manual.)