23 Days and no longer counting.

If you've been following the "Not growing a beard, but not shaving either" saga, and who hasn't, you'll be pleased (or not...who cares), to know that after 23 days, I'm shaving the damned thing off. 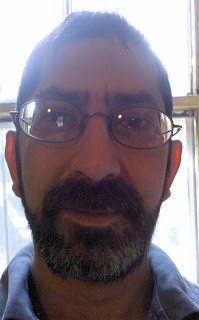 There are any number of reasons I might be returning to the ranks of those who don't hide their chins.
1. There's nothing wrong with my chin.  It's a fine and noble chin.
2. The presence of a beard does nothing to minimize that nose, so that's no reason to bother.
3. The beard itches.  Really.  If memory serves, it would need another month or so to stop being an itchy irritant.
4. I don't hate it, but I don't love it.
5. Stuff gets caught in it.
6. In cold weather, it's not so much something to keep my chin warm as an additional place for stuff to freeze.
But none of those are the real impetus behind the fact that I'll be shaving tomorrow.  Nope.
The real reason is that I have to renew my Drivers License.  I've been planning to shave the beard off before my trip to Seattle (see sidebar for countdown), because I have no intention of giving TSA another reason to "randomly select" me for additional security (which invariably has happened every single time I've flown in the last 8-plus years).

I'm just kinda figuring if I show up clean shaven, but produce I.D. with a beard on it, they'll look at me and assume I was trying to clean up my act so I could board the plane undetected.

In keeping with this theory, I'll probably wear sandals on the flight (ambient temperature be damned).  I'll be traveling commando. (The term may make things sound counter productive, but I'm not taking any chances.)  I will also refrain from donning tefillin, or taking up any other religious practice with which the general public may be unfamiliar.

We'll be checking on that going commando bit. ;)

Good idea about shaving for your driver's license. I wore my turban for my last license pic, and man, the TSA gives me hell about that every time I try to fly anywhere.

We'll be checking on that going commando bit.