Are you looking for a damn?
Or a rip?
Maybe a rat's ass?
Possibly a flying...?


Don't come here, because we won't really be giving any of those.
We're just not huge football fans here. But do you know what we are big fans of?  Snacks!  We loves us some snacks here at Chez Nathan.

So, today, Anon GF started planning the snacks for Sunday.  There will be two kinds of chicken wings.  There will be sliced cheeses, cheese ball, and various spreadable cheeses.  There will be chips, dips, crackers, breads, pickles, olives, veggies...There's gonna be an embarrassment of snacks.

I like that.  So, anyway, GF made her shopping list and made plans to visit the nearest grocery store...which is...uh...the less than stellar grocery store.  That's OK, she was mostly going to pick up some basics and it really doesn't matter which grocery store you go to for that stuff. 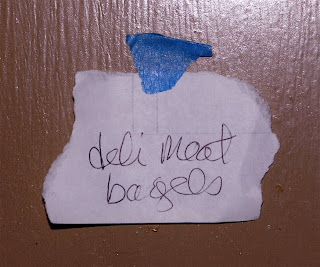 It is the entire shopping list I was handed.
Not only did I pick up all of the items on my massive shopping list, I actually picked up a few other little goodies I saw that I knew Anon GF wouldn't see at the grocery store she was slumming at.  I was even congratulated upon my return to the house on my lovely and imaginative shopping.
Roughly 11 minutes after we finished putting away our respective hauls, GF turned to me and asked, "Did you get beer?"
I don't see any beer listed on my list!  Do you see any beer listed on my list?  No?  Me neither.  That's because beer is among the absolutely huge list of items that completely fail to appear on my list.
::I'll go out tomorrow and get the beer. In the Blizzard. I may die. But I'll get the beer.::
Posted by Nathan at 6:40 PM

How could you have failed to get beer?

I'm afraid you may have to turn in your testicles.

Hey! She had the big list. She was going to the store that's only a block away. Beer shoulda been on the big list...which she was in charge of.

I was just supposed to be in charge of cold cuts and bagels!

(I can't believe how unfair you guys are all being about this!)

Ahem!
I'm not quite sure what to say. In Nathan's defense, beer was not on his list (as you can see.)
But, really, it's BEER. For the big Testosterone laden game. I mean really. Even tho we'll watch for the spectacle and commercials rather than excellent sport...it's still BEER!

That is a tough one Nathan, I would have browsed the BEER isle looking for a sale or something interesting.

Hard to say if I would have actually purchased anything in your situation or not.

If I had purchased something it would probably only have been a six pack (easy to carry). Definitely not enough to satisfy the testosterone laden, but enough for me personally.

Beer Isle. What a place to get marooned.

isle/aisle wasted all my brain power on spelling testosterone correctly and missed that.

But, it is a place I would like to be with over a foot of snow keeping me from going out. As long as it had some connection to the Snack Isle.