I read this story this morning about the American Family Association of Michigan filing a suit that claims Hate Crimes Legislation is an effort to eradicate their beliefs.  Their complaint claims that protecting gay, lesbian, bisexual and transgendered people "is an effort to eradicate religious beliefs opposing the homosexual agenda from the marketplace of ideas by demonizing, vilifying, and criminalizing such beliefs as a matter of federal law and policy."

Frankly, I think their suit is fairly ridiculous...read the rest of the link to see why they're whining about nothing...but on the other hand, Hate Crimes Laws of all varieties have always made me feel a little bit uncomfortable.  I completely understand (and sympathize with) the reasoning behind such laws; I'm just not sure I can see where they're necessary.

Are they necessary?  In most criminal cases, motive isn't a necessary part of the prosecution.  There are any number of cases that are successfully prosecuted where the State acknowledges that it doesn't have the faintest idea why a certain crime was committed. You don't need to prove why a defendant killed someone...just that he did kill someone.  The motive may prove relevant at some point...was the murder committed to silence a witness in some other prosecution?  Well, that's a whole additional crime with its own set of penalties.

Expressing hate isn't a crime.  Acting on it is.  Example:  Having a Klan rally at some private campground and burning a cross while somebody speechifies about how blacks and Jews are destroying the country...isn't against the law.  Having someone at the same rally exhorting everyone in the crowd to go out and kill some blacks and Jews is a crime; in most places there are already laws against incitement to violence.  (Note: holding the rally and burning the cross on someone else's private property is also a few kinds of crimes that are already on the books without hate crimes needing to be included.)

And leaving mandatory sentencing structures aside (something else I'm ambivalent about), if hate is an element of the crime, aren't judges able to take that into consideration when sentencing occurs?

Looking at it from the other side of the coin, is someone murdered for reasons other than hate less deserving of justice's full weight?  Take the case of Jonathan Levin. He was a Bronx High School teacher who was murdered as part of a robbery.  Prior to being executed, he was tortured until he'd reveal the PIN number for his ATM card.  Without minimizing the horror of what happened to Matthew Shepard, can anyone really say that Jonathan Levin was less terrorized, just because the motive behind the crime was different?  Isn't the brutality in each case something the judge can take into account during sentencing?  Isn't that considered an element of the crime in the sentencing guidelines? Isn't it considered a special circumstance?

Or take this case.  Wasn't the guy already guilty of inciting to violence, harassment, terrorizing people and possessing unlicensed weapons and explosives?  Once again, couldn't a judge have taken the "hate" element into account during sentencing? (Yes, I realize this case didn't go to trial since the guy plead guilty.)

Like I said, I'm ambivalent about the subject, but the whole concept makes me uncomfortable.  You're welcome to try to sway me toward one side of the argument or the other.  Be warned:  If you, in any way, try to convince me that Hate Crime Laws impede your right to spew vile epithets (they don't), you'll only be pushing me toward the other camp, so kindly refrain.

And now, since the whole thing depresses me, I'm going to look at some adorable doggies! 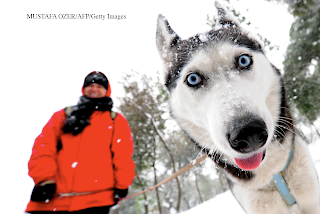 There are a bunch more of them here on Boston.com.
Posted by Nathan at 9:48 PM

I'm not a big fan of hate crimes legislation either, for the reasons you cite.

However, the AFA are assholes. I mean, for them to have standing--that is to say that they're actually affected by the legislation, logically wouldn't they have to say that they're intending on committing acts of violence based on sexual orientation and are concerned about being unfairly punished for the same? Otherwise, why are they even plaintiffs? I mean, if that's not actually in their brief--which I have a hard time thinking it would be, for obvious reasons--then isn't the subtext? "Yeah, well I haven't beaten up any queers yet, but I might, and I want to make sure all my options are open, y'know."

Unless they're framing this as a taxpayer suit, I guess. I suppose that could be what they're doing, but that hardly seems smarter: "Please don't use my money for law enforcement." Huh. 'Kaaaaaay.

Morons. My country is full of morons. And I am insufficiently boozed up to contemplate the scope of the vast moronity, dammit.

I'm not sure that AFA isn't a victim of it's own past successes involving shading the truth, half truths and blatant lying. In the past, they've managed to get their own constituency all fired up (not that that's such a difficult proposition), by lying about the ramifications of EEOC regulations forcing them to hire gay teachers and gay janitors and gay priests and gay bus drivers and being forced to remove crosses from churches because everybody knows that crosses make gay choir leaders uncomfortable (or something like that).

I'm not sure if they recognize the difference between distributing propaganda to people already inclined to believe the worst horror stories they can think of and courts which...uh...parse complaints and pay attention to the actual words in them and even which parts claim to be actual quotes.

Like I said, ultimately, that article just got me thinking about something that already makes me uncomfortable. In their case, I'm reasonably confident they'll crash and burn. (Which, of course, will give them something new for their list of how horribly they're oppressed!)

I like the dog pics, they're happier than hate crimes. Not that hate crimes are happy.

Don't get me started on the privileged majority claiming persecution and discrimination. "Moron" is the nicest thing I would say about them.

But I tend to agree with you about hate crime legislation. I don't think the victim's experience is any different if they're victimized due to a protected status rather than a random event.

The behavior of the perpetrator (and mitigating factors, etc.) should govern the severity of the sentence.

The AFA are just dumbasses - their 1st Amendment rights aren't being abrogated, and unless (as Eric notes) they're planning on beating up queers as a matter of free speech, I can't see how this affects them.