Stuff Gets A Little Hazy When You're Visiting The Lost World (AKA Seattle). 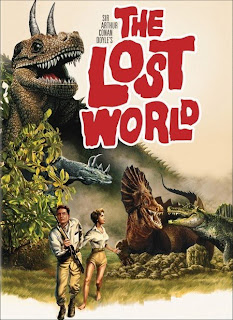 You may think I'm exaggerating, but I wouldn't be the least bit surprised to turn a corner and see dinosaurs chasing Wallace Beery and Bessie Love down the block.  You see, I've developed a theory.  It should have become obvious to me long before my flight arrived here in Seattle, but I'm convinced the place only exists on some alternate plane,  possibly in another dimension even.  Allow me to elucidate and expound.

While flying here from the East Coast, there was a variety of clear skies and partial cloud cover.  While passing over Montana, things were fairly clear.


JetBlue puts the little airplane icon on the moving map to narrow down your position to appoximately 500 miles -- the icon is precisely to scale. 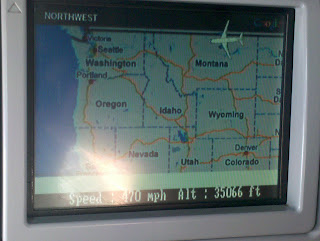 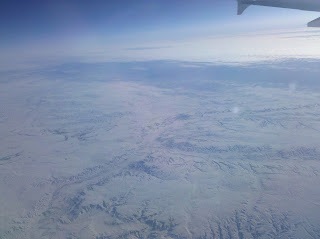 I had planned to take some additional pictures as we got closer to Seattle, but there was a problem.  As we approached the Rockies, We also witnessed the beginning of a cloud.  The cloud covered all but one Rockie (a not terribly impressive Rocky if I do say so myself), and the same cloud reached all the way to Seattle.  The ground would not be visible again until we were roughly 35' from the runway.

This should have been my first clue that Seattle operates in it's own space/time continuum. First they fly you over some place where there are no witnesses, and then they fly you into a cloud so that you don't realize when you've departed normal space-time.

Then you're in Seattle!

Here, in brief, are a few things I've come to understand about Seattle.

-As I mentioned yesterday, Seattle is nothing, if not conscientious about providing seating in public spaces.  All seats are wet.  (I don't know this for sure, since the sun is merely a rumor here, but I'm fairly certain the city hires people to hose down the benches if the rain ever stops.)
-There are more per capita shoe stores in Seattle than anywhere else on earth. (more on this later).
-The rain does stop on occasion.  Usually 5 minutes after you've gone inside.
-It starts again as you exit.
-Regardless of where you are or where you are going, your destination is uphill.  Even returning to the spot where you began...is uphill.
-If you think you are headed North, turn around.  You're headed precisely South. (The laws of geography don't work here.)
-There are 12 million coffee shops.  All of them are wholely owned subsidiaries of Starbucks.
-The woman with the sign who is collecting money for "Haiti Relief"?  Her name is Haiti.
-Elevators are really weird.  1. If you enter one at street level, you need to descend 5 floors to read street level.  2. When you are riding in an elevator, don't be surprised is some random woman tells you loudly, "GET OFF"!

Below the cut, you'll find many photos of my trip...so far.  Bear in mind all of the above while perusing them.

If I were more techie-competent and/or if Blogger were more user friendly there'd be a cutline right here...cuz this is a long post. I'm not, Blogger isn't and there's no cutline.

On the first night in town, I met up with Jeri (left) and Tania (right).  We went to a really good PanAsian place with a ton of seafood on the menu.  I got the distinct impression that seafood was going to be a common theme of the weekend, so I had lamb chops.


Then, we drove in the dark and the rain to Bainbridge Island.  The pics below are of the ferry ride back to Seattle the following morning. 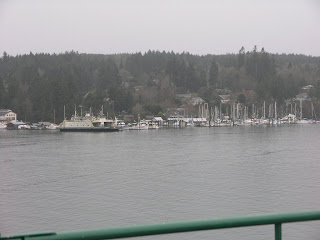 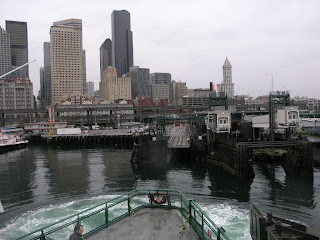 Tania and Jeri went to the airport to pick up Janiece, Janiece's Smart Man™, and Tom.  I killed a couple of hours wandering around.  In addition to taking the following pictures, I bought knives (the cookin' kind, not the killin' kind), and snarfed down a bunch of shrimp.  Note:  You may notice the brief appearance of the sun here.  There was celebrating in the streets.


This picture shows Pike Place market, Sur La Table (where the knives came from), and a ferry headed to Bainbridge Island in the distance. 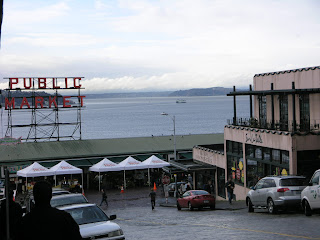 These two girls were posing with people. 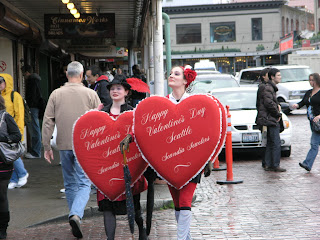 Then...WE ATE again.  From left to right: Jeri, Janiece, Smart Man™, some lady at the next table, Tom, Tania and then...me. 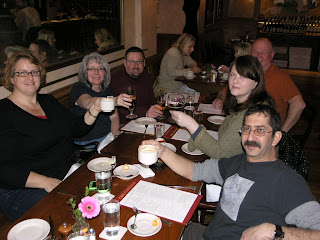 Then we began another theme of the weekend.  We went shoe shopping.  These particular torture devices were found at, if I recall, a place called Fahrvergnügen. 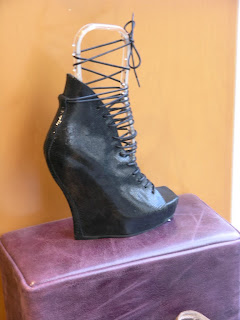 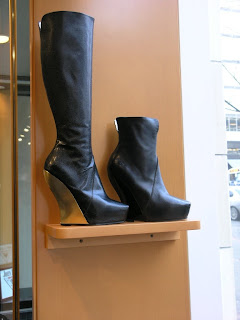 After we looked at shoes, we went to look at some more shoes.  I emailed pics to Anon GF in case she had to have the leopard skin boots. 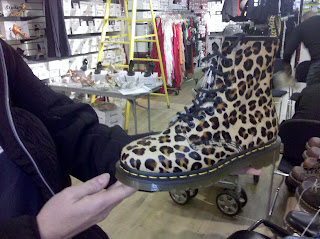 Or the green or red ones.
She indicated that she could live without them. 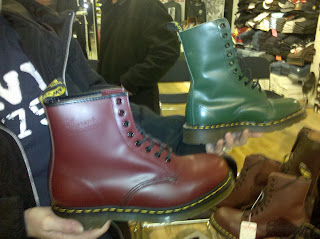 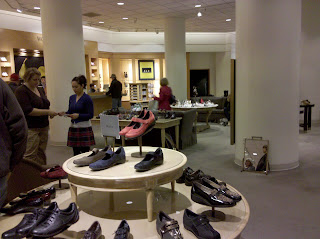 Here we are waiting for the monorail that will take us to the Space Needle. 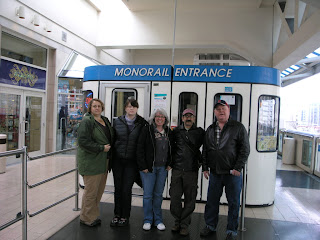 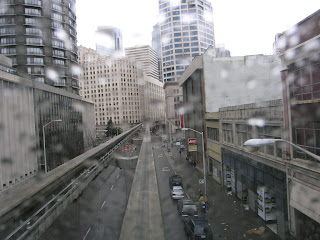 Tada! The Space Needle.  There's a sign announcing that the observation deck has 520' of viewing.  I misread the sign and thought they were claiming to have 520 degrees of viewing.  I took that in stride.  After all, I had already grown accustomed to the fact that normal space-time isn't observed in Seattle. 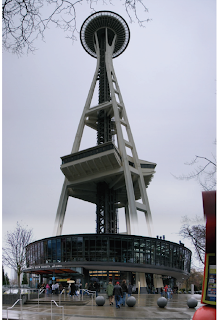 Here's the view from the top. 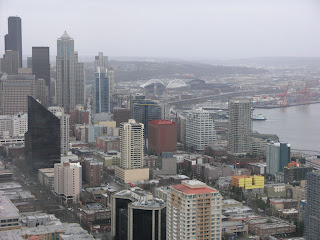 This is a lovely shot of KOMO's helipad.  They weren't accommodating enough to have a helicopter land or take off while we were there.  Bastards! 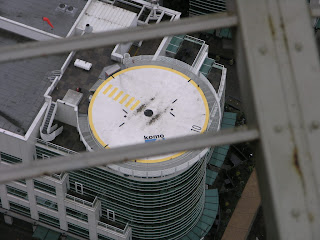 Here's a brilliant shot of our group looking at the view. 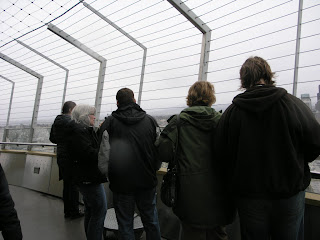 And I discovered that if we turned around and faced the glass I could get a better picture of us with the skyline in the background.  I especially like how Janiece and I don't have our faces in the picture since we had our faces buried in our cameras.  Also, the guy a the table just inside the window wanted to know why we were so eager to get pictures of him. 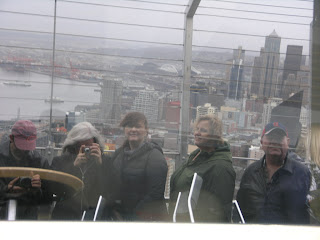 Right across the plaza, you'll find the Experience Music Project and Science Fiction Museum.  You're not going to get a billion pictures of the inside since the lighting is mostly subdued.  Here's the outside.  Note that the monorail runs right through the place.  It's pretty cool looking.

One shot I did get inside is of the Guitar Tower.  This sculpture actually plays itself and you can listen in on headphones.  (It's a fairly boring song, but the execution is pretty impressive.) 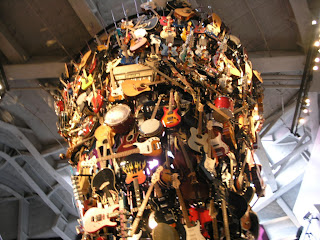 That night, we went to Elliot's Oyster House.  We spent about 3 hours eating everything we could get our hands on.  After dinner, Jeri and Janiece spent 20 minutes trying to figure out who owed what.  They told everyone their shares...everyone tossed money into the pile.  We came up $30 short.  I'll never apologize for my math deficiencies again. 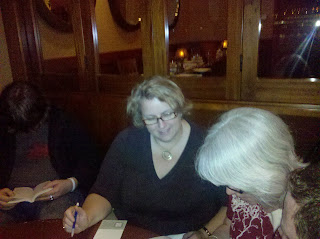 Today, Sunday, we were lazy...and we ate a lot again.  We had steak and eggs for breakfast at Jeri's hosue (at Noon).  Then, the girls all decided to go get pedicures.
Tom and I went elsewhere! 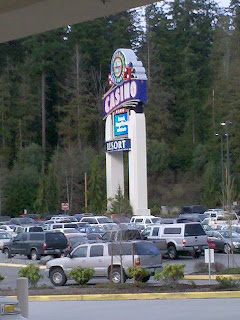 Oh, and just to finish things off with another taste of what Seattle is all about...This is a directional arrow I noticed on a street corner.  It's just like the ones we use to get a film crew to location.  But there's no indication of where this arrow is leading you.  And there are no arrows leading you to this one.  And there are no arrows after it to direct you somewhere else.
I choose to believe it's to save Bugs Bunny from ever having to say, "I guess I shoulda taken a right toin in Seeeee-A-tul". 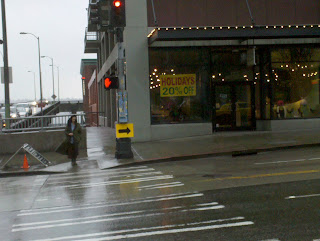 P.S.  This has taken a really long time to upload and post.  I am not going to proof read it.  I hope my typos prove to be amusing.
Posted by Nathan at 1:19 AM

This is the best event description post EVER. I'm traveling with you in the future. :)

It looks like you guys had a great time. So sorry I couldn't be there!
I'm planning for Reno in 2011 though! :)

So, Seattle is actually Brigadoon?

So cool. So jealous. Glad y'all had fun!

So, at the end there, did Smart Man go to the casino too? Or did he go for the pedicure?

He took a book to the coffee shop.

I would've been at the coffee shop with a book too.

Jealous and looking forward to Reno in 2011, as well. Watch out WorldCon...

I'm not a pedicure kind of girl either, but I've been known to sit and read most anyplace.

Hmm...Reno WorldCon in 2011 instead of a fraternity conference I'm supposed to go to that summer. They'd probably cost about the same if I shared a room with someone.

Hmm... Have to ponder on that one a bit. I've been to Louisville before. Seen the horse farms.

You got knives from Sur la Table? You didn't say THAT when y'all called!

Now I'm even more jealous--I love Sur la Table. Did they have the Kuhn Rikon paring knives? I love those so much I have two.

I spent the unhappiest year of my life living in Seattle in the mid-80s. Nice to see what's changed and what hasn't.

It must be my imagination, but I thought I posted!
Imagine my delight when Nathan said he found the perfect red patent knee high stilettos....for me!
I imagine a great time was had by all.

Michelle, next time you come to Denver, we are going to Sur le Table. It's my favorite place to get little presents. :D