Two Things That Are Fucking Retarded

First up, we have the fruitcake from the north that we just can't give back no matter how hard we try.  Sarah Palin has taken Rahm Emanuel to task in a Facebook posting for a comments he made about liberal Democrats planning to run ads against moderate Democrats...in which he apparently called them 'fucking retarded'.

But my favorite part of this story was the way it was related tonight on the news.  At the end of the report, the anchor said, "The White House hasn't responded to Ms. Palin's Facebook post".  Sorry, but when the White House starts making formal responses to shit on Facebook, that will be pretty fucking retarded.

Second, we have something of a followup.  Remember my post about the first legal male prostitute in America?  Well, The New York Post, sent a reporter undercover (get it? huh?) to get the straight dope on him.

I can summarize.  He's a straight dope.

Here's the high points of this investigative journalism.
-Markus (real name Patrick) was a virgin until two years ago.
-Our undercover reporter is his second client. (That's like less than one per week.)
-He knows he's great at pleasuring a woman because he "pronunciates" words well.
-His favorite musicians are Moby and "Choppin". (Our reporter thinks he meant Chopin.)

And just so you don't all think I'm just being mean to Markus, I've got some advice for undercover reporter Mandy Stadtmiller.  I seriously doubt Barbara Walters took a shower with Anwar Sadat to get him to open up with her. 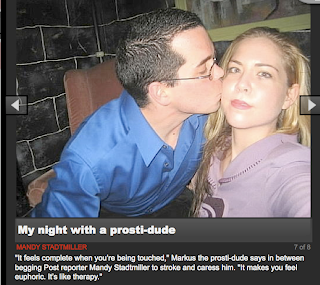