Things Get waayyy Hazier Flying In The Other Direction.

I have no idea whatsoever what day or time it is.  I have the distinct memory of publishing the post just before this one on Sunday.  My blog, helpfully remained in the Eastern Time Zone, so it says I published it in the wee hours of Monday morning.

Yesterday, which was apparently a second Monday this week, we spent many blissful hours geeking out at Boeing's Museum of Flight. (You'll get a full post with too many pictures later).  After they threw us out of the museum (they close at 5:00pm), I decided it wasn't worth driving into Seattle just to turn around and drive right back again to catch my flight, so I just killed a bunch of time right where I was...next door to the airport. (Right next to the airport is a relative term.  There are either 16 regional airports right next to Sea-Tac or their runways are 12 miles long.  I don't know which, but you drive next to the runways forEVER before you get to the terminal).

Before hanging out at the airport for three hours, I went to this place right down the road.  It's kinda aircraft-centric (being next door to Boeing and all), and happily stuck in 1972. 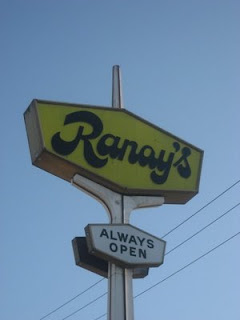 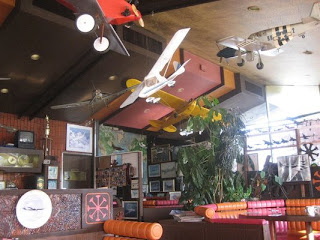 I don't have much to report about my lengthy sojourn at SeaTac before boarding my plane other than to report that Avis wanted to charge me for putting 19,712 miles on their car, and that if you're a smoker, you have to follow a bunch of cheery little signs 1/2 way back to Downtown Seattle before arriving at the designated smoking/pariah area.
I took the redeye flight back to New York and arrived in snow and cold and now I don't know what day it is anymore.  I know I slept some on the plane (after watching a crappy $6 movie), and then I slept in the taxi coming home and then I slept another 5 or so hours after I got home.  I'm pretty sure my cab driver was the brother of the driver who took me to the airport when I went to Seattle...at least he wasn't any better at finding Atlantic Avenue than the first guy was.


This is the way my driver wanted to go on the way to the airport. 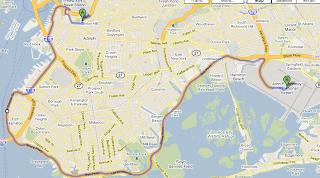 This is the way you're supposed to go.  Notice that whole "shortest distance between two points" thing in action.  This route also works really well in the opposite direction.

This is the way my taxi went this morning.  That little lack of cutting the corner may not seem like much, but during a snowy rush hour, it adds almost a 1/2 hour (and $15.00) to the trip. Bastard!

Anyway, I'm having coffee now and trying to figure out what day it is.  I'll tell you about my last two days in Seattle later when I feel more like a person.

BTW, I woke up to a lovely text message informing me that it's sunny and clear in Seattle today.  I'm not sure I really believe it, but it is good to know that the city's Bench-Wetting-Teams will have work today.
Posted by Nathan at 2:57 PM