Nathan Comes Through For Utahans (Or Utahns Or Utah-nites Or Utahinians Or Whatever-The-Hell You Call Them). 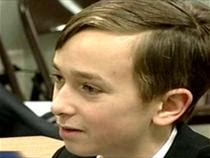 Apparently, Utah was about to do away with Daylight Savings Time and their legislature was discussing the issue.  One representative, Kenneth Sumsion, using that Common Sense we've been hearing so much about lately, said, "Only the government would believe that you could cut a foot off the top of the blanket, sew it to the bottom, and have a longer blanket."

I'm assuming the public was invited to comment, because after a bit of seemingly confused debate, young Mr. Flynn took it upon himself to explain things like the axial tilt of the Earth and latitudes and stuff like that (stuff that might require a basic level of education), and that, "You'd have your lights on for several more hours a day than you would normally, which doesn't seem smart."

The video of Nathan schooling his Legislature is in the upper right corner of this page. Sorry, the embedding didn't seem to want to work.

Score a victory for those damned educated elitist...and Nathans everywhere.  (I have a little tear in my eye just thinking about it.)(sniff)
Posted by Nathan at 10:17 PM

Not to knock the kid, but he seems older and smarter than thirteen mostly because it appears that Utah's legislators and newscasters are slightly retarded.

I mean, I was afraid the clip would show the poor kid talking about "why getting rid of Daylight Saving messed with the tilting of Earth and Utah's relationship with the Equator," but it turns out the kid (based on the clip) was talking about power consumption--which is the primary reason for DST--and the cheesy Equator reference was the reporter being patronizing, stupid, or both.

So the kid is clearly the smartest guy in the room, it's just a shame that isn't saying more. Still, good for the kid, y'know?

diptacit: how some Southerners sneak their nicotine habit.

To paraphrase your hero, Donald Rumsfeld, "You post the smarmy story with the story you have---not the story you might want or wish to have at a later time".

Seriously, that segment was almost a non-sequitur in relation to Flynn's comment. I would've much rather seen more of Flynn's statement.

Yeah, I was disappointed not to see more of Flynn's statement as well.

I guess it was a real life application of "Are You Smarter than a Fifth Grader." Too bad the Utah legislature had used up all their cheats.

And to be doubly smarmy, as I remember, most studies show DST doesn't save as much electricity these days do to the change in our lifestyles.

Talk like that'll get you voted off the island.

If you don't have facebook I am sorry, I cannot help you.

I'm flattered right back. Frankly, I'm shocked every time someone finds this place!

BTW, Can I be your press secretary when you get around to running for something?

I don't know... If you are a little older then your profile picture....

I think that the reporter is a little dim also...

1. Uh...yeah. The reporter's dimness is a consensus opinion around here.

2. I was just about to comment, "Shouldn't you be in bed by now?" Then I remembered that whole "time zone" thing. Ironical, ain't it?

Thanks for the link, Nathan!

For everyone else: If you choose to click on the mp3 file (instead of the other, mystery filetype), the discussion of that particular bill starts at about 16 minutes in and NF's comment is at about 26 and a half.

I don't know... If you are a little older then your profile picture....

2. I've listened to the audio and I'll probably post an update, but two things become apparent...First, that the amendment's sponsor, in context, doesn't come off as quite the idiot the reporter painted him to be, and second, that Flynn still comes off as the smartest guy in the room.

I splutter a lot with indignation of their stupidity.

And My mind moves fast than my mouth, so some trains of speech are lost....

Forgive me for my slight splutters....

I think it's fairly clear that your educational state is Utah.

I took an educational status test recently. And the results are that I have the Overall knowledge of a high school senior.

I have been home schooled since I was six.

Oh! Your profile picture is much better! Maybe you can be my press secretary!

Thanks. I was getting bored with that Avatar anyway.

This is my mom's blog on this subject:

Oh and this is what my dad does, he's CEO: