I'm totally admitting I didn't watch the State of The Union Address last night.  I decided earlier in the day that I didn't care to see or hear it.  Why bother?  There was really a less than zero chance that I'd watch the speech and decide, "Hey, I've been wrong about this guy!  Maybe Glenn Beck has been right all along!  Geez I feel like such a dope".

Nah, whatever Obama said last night I would have come away thinking the same things I thought going in...namely that he's Presidential; that he's thoughtful; that I like the cut of his jib. (I wouldn't know a jib from a mizzen topgallant staysail, but since my uninformed-ness is equal opportunity...).  Anyway, not only wasn't I expecting to change my mind about Obama based on anything he said last night, I certainly wasn't expecting any of his arch-nemesi, detractors, enemies, slavering hordes of mouth-breathing half-witted... loyal opposition to have any sudden epiphanies and cross the aisle in newly adoring amity either.

I feel a little bad admitting this, but I turned to the only channel I get that wasn't showing the speech and watched another adorable little show riddled with teen angst and woes. It wasn't the least bit painful and it barely interfered with the book I was reading at the same time. 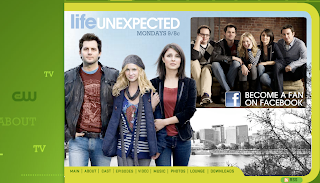 Finally (with no other options), I tuned in at 10 o'clock and (sorta kinda) paid attention the the last part of the speech.  I was glad to see that he (mostly) abandoned Terminator Ninja Obama... 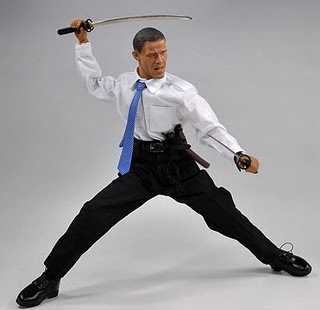 ...in favor of calm collected Obama. 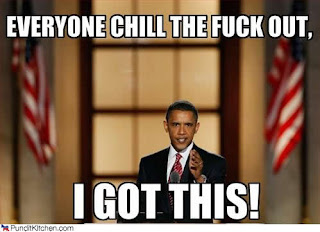 Yup!  Presidential!  We even got to watch 'Bobble-Head-Biden' and 'Pop-Up-Pelosi'.

What more could you want (to remind you that the STOU address has become a more-or-less useless affair in partisan politics)? 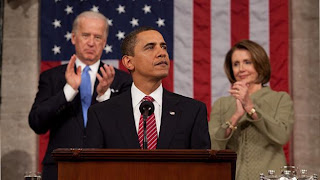 Oh, I forgot.  There is more.  Sean Hannity managed to get his hands on the White House's "pre-STOU talking points".  And not only did he blather on about them, he got the Prince of Darkness, Beelzebub, Rosemary's Baby, Republican strategist Karl Rove to sit in with him to dish the dirt.  And all of this before Obama said a word.  Yup!...they were gonna listen to the speech with a totally open mind.  Now, I'll admit that a transcript of a radio show might miss some nuance.  The spoken word and the written word convey meaning differently.  But I challenge you to make any sense out of the transcript of that show.  I honestly don't know what the fuck they were talking about.  I can tell that they're angry.  I can also tell (without listening to any of Sean's callers) that his audience would have been frothing at the mouth...completely unable to contain their pre-conceived loathing for Obama or their fawning adoration for all things Sean & Karl. (BTW, I've always thought that since Karl didn't bother to change the spelling of his name to start with a C, you should get a free pass on the whole Godwin's Law thing whenever he's involved.)

Another thing that makes me think it's just all political theater is that fact that since 1966, there's been an Opposition "Response" to the STOU speech.  Talk about useless!  It's nothing more than a chance for the Out party to trot out some 'rising star' to see if he can get enough traction to be a viable contender at some future date.  They also usually turn out to be utterly expendable in the event they come off looking like a total Schnook. Remember this guy? 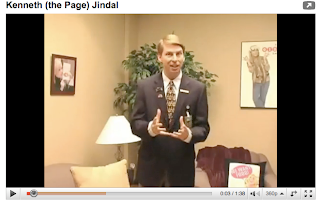 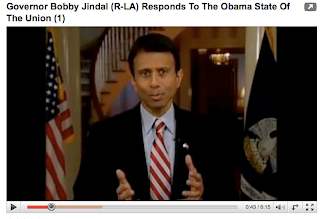 This year we got Virginia's new Governor looking all kindsa Presidential his-own-self! 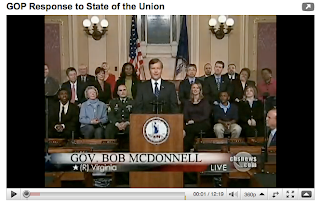 And you got imagery that totally mimicked Obama speaking to a joint session of Congress. 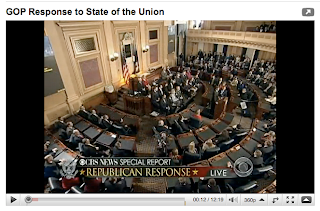 And he doesn't have to let any pesky Demon-Crats into the audience.  Everybody claps when they're supposed to and nobody sits on their hands. You can take it to the bank that that's gonna be used as proof of...something!


Look!  They friggin' adore him. 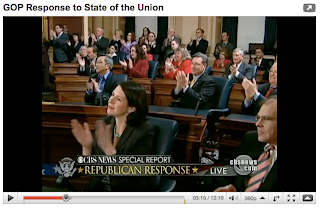 Anyway...let's get back to the point of this blatheration...I'm Loud, I'm Proud, and I'm Totally Uninformed!.  See, I'm taking my cue from the Tea-Baggers and Birthers.  They haven't the first clue what the fuck they're talking about most of the time.  Even on the rare occasions when they make a cogent argument, it tends to be in support of a specious premise.  But somehow, they've managed make themselves heard and taken seriously.  I'm sure there's no shortage of brain-damaged idiots on my side of the aisle.  I've just made the tactical error in thinking you could beat these people with logic and reasoned arguments.

I'm thinking that the less I really know about stuff, the better prepared I'll be to fight the opposition. Note that I'm not saying anything about actually swaying the opposition.  That's clearly impossible.  I've just decided that drowning them out may be more effective in the long run. 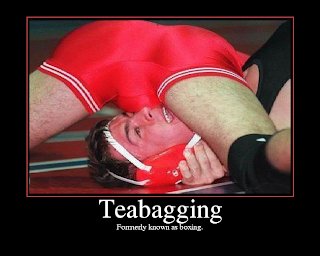 I'm thinking we could start a movement of The Stampers!  There's all sorts of good things about this idea.  It also harkens back to the Revolution and the Stamp Act predated the Tea Tax by almost two full years.  We could be first...retroactively...before we even do anything.  And we could launch protests kinda like those guys who throw pies at speakers they don't like...only we'd have these nifty Stamps you could plaster over people's mouths.  That'll shut 'em up!

And we'll have catchy slogans and stuff too! Admittedly, I'm gonna need a little help with this part.  The Tea-Baggers have clearly demonstrated that effective slogans must:

-be short and angry.

-have absolutely no basis in reality.

-be based, not merely on purposeful misunderstandings, but be blatant lies. (Death panels anyone?)

-be memorable enough for really stupid people to at least spell them correctly. (I'll admit that this one is more a matter of learning from Tea-Baggers' mistakes, but lessons learned, right?)

The best I've got so far is Gov. Bob McDonnell caused the earthquake in Haiti!  (He was inaugurated on January 6th and the earthquake hit on January 12th. Coincidence?  I think not.)  You may think that's a stretch, but I'm telling you...you've got to adjust your mindset!  Hey, Obama was born in Kenya, wasn't he?  There's proof dammit!

So, please...help me get The Stampers movement off the ground.  We're Loud, We're Proud and We're Totally Uninformed.  We don't know what the fuck we're talking about!  (But we've got an internet connection and we know which end of a camera to shake our fists at.)

The Conservative Fascists eat puppies for breakfast, and want you pregnant and barefoot in the kitchen. (everybody, not just the wymin folk)

They're harshing my mellow, dude!