Welcome To The Future. Now Don't Fuck It Up.

I wish I had a post that really goes with that headline, but I don't.  I just liked the way it sounded and it is a worthy thought, so consider it my helpful piece of advice to begin the New Year.  Now, on to the boring crap I do plan to tell you about...the current state of Polybloggimous.

During 2009, I published 369 posts, which actually means my productivity here has taken a nosedive.  Ah well, sue me.

I had 21,165 visits and 31924 page views during the year.  You'll note that things dropped off precipitously back in July and never really recovered.  That's when that whole "naked URL" thing reared its ugly head.  In short, you used to be able to get here by typing http://polybloggimous.com but ever since July, you've had to add the "www." prefix.  I don't know why.  I've tried to fix it, but instead, I valiantly rose to the highest levels of my incompetence.  Ah well. 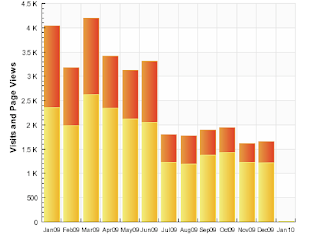 My last visit of 2009 showed up from Oakland, California at 11:23 p.m. last night.  I have no idea how that person got here.  Whoever it was didn't stick around very long either.

My first visit of 2010 (may I remind you, we're pronouncing it Twenty-Ten, not the more cumbersome Two-Thousand-Ten), came from Baltimore, Maryland at 12:27 a.m.  This person was looking for pictures of pampano (that's a fish) and ended up here. (I'm mildly curious about why somebody needed to see pictures of pampano 27 minutes into the new year, but hey...) 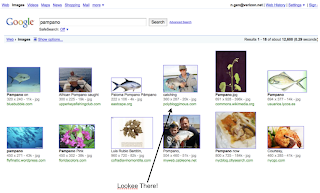 I have to admit, I feel mildly guilty about the prominence of my blog on this image search.  It's not like I'm in that picture and it's not like I took that picture.  I just found it on my own image search and used it a few months ago to illustrate some pointless point and now I keep getting hits because of it.  I live in daily fear that the Pampano Image Publishing Task Force (PIPTF) is going to come after me for using it.  Before the LAWYERS come after me, I just want everybody to know that I'm willing to make this substitution if requested. 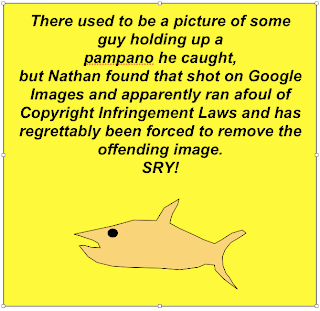 (And I'm wondering if this new image is going to get as many hits as the other one does.)

Anyway, that's what's been going on here at Polybloggimous.  It's time for brunch and I feel more like eating than I feel like typing.  I'll probably be back later today (I know you're all on pins and needles or tenterhooks or whatever impatient metaphor you want to use), so check back in.