Making Good: A Recipe & Some Long Owed Prizes. (And They're Both Good!)

Slightly more than two years ago, I promised to post a recipe once I had perfected it.  I'm not at all sure it's been perfected, but it's pretty damn good.  Before I get to that, though, there's another bit of unresolved business here.  It seems I had a contest almost a year ago, and there were winners, (Eric and Michelle), and I promptly forgot to ever send them their prizes.  Oops!  My bad.  I'll be rectifying that before the week is out.

Anyway, I'm not sure what to call this recipe.  It's based on a recipe I found for "Antipasto Squares", which I think is a lousy name. I've only come up with names like "Italian Meat Pie" or "Eat This! It's good and meaty and cheesy", neither of which is any better.  Suggestions are welcome.

Anyway, it's a variation on an Italian Sub.  An Italian Sub comes with a variety of salamis and hams and cheeses and oil and vinegar and salt and pepper and lettuce and tomatoes and onions and sweet peppers and hot peppers and...a whole lot of stuff that won't actually work in this recipe.  And the recipe isn't so much a recipe as me telling you what works and what doesn't work and what I actually did and feel free to monkey with it based on my own lessons learned.  You'll like it.  It's good and meaty and cheesy!

The key thing is that meats like Genoa Salami, Capicola, Sopressata, Pepperoni and Prosciutto are all delicious but one reason they're all delicious is that they all have large fat contents and when you cook them, you make a lot of grease in the pan and create something soggy and abominable.  Likewise, if you include too many of the delicious veggie type things, you're introducing lots of water content and overloading the mush factor that way.

You can mess with these ingredients, but I ended up using:
-Pilsbury crescent dough. (You can use another brand or get all ambitious and make your own puff pastry if you want.  Do not choose the one that brags about having more butter.  Normal butter content is more than enough and we're trying to keep the grease content to a minimum.)
-Black Forest Ham (it's a little drier than some other hams).
-Hard Salami (Ditto the drier thing.)
-Sweet Pepper slices (drained and patted dry in paper towels).
-Red Onion.
-Provolone cheese.
-Mozzarella cheese.
-a couple of eggs, cilantro, garlic, salt, pepper and a teeny-tiny bit of red wine vinegar.


Start by lining the bottom of the pan with crescent dough.  I was using a small 8"X8" pan, so I didn't use up a whole package for the bottom layer, but a 9"X13" pan is perfect for the amount that comes in one package.  And it doesn't matter if the bottom layer is pretty. It's on the bottom and you want it filled in really well and even climbing the side of the pan a little.  DON'T GREASE THE PAN.  You'll make enough grease without it. 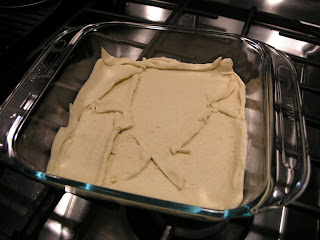 Start layering in your meats! Aside from choosing lower grease meats, it's important to use really thinly sliced meats.  You can layer in more if you like, but if you use thicker slices, you'll find yourself dragging components out of the finished product when you try to bite into it. 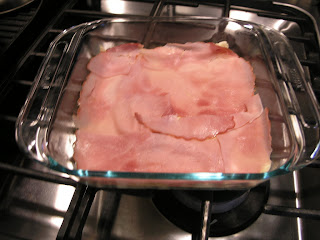 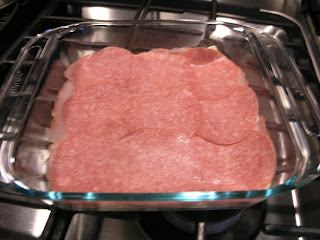 Allow me to digress for a moment.  Here's one of the knives I bought when I was in Seattle.  It's a Shun Nakiri knife and it may be the best kitchen knife I've ever owned.  This sucker slices stuff just by looking at it.  You can slice in nano-thicknesses.  It also comes with a 'D' profile handle and you can buy them made for right-handed or left-handed folks.  Does it sound like I like this knife? 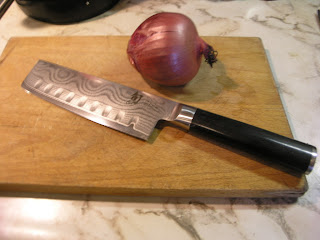 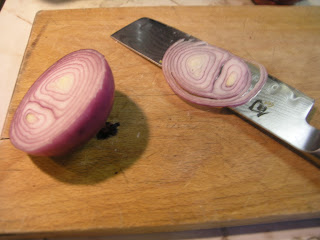 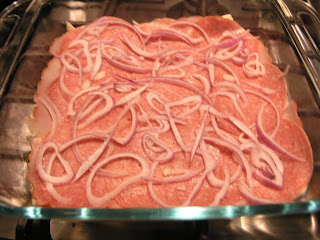 You'd be right if you think that the order you layer all this stuff doesn't matter so much since you'll be biting through everything at once when it's done, but bear this in mind.  The cheese and the egg layers are what hold everything together.  Use them wisely Grasshopper. 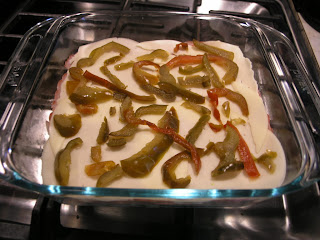 After adding the onion, provolone and peppers layers, I added another layer of each meat.  Then I put on some shredded mozzarella and some fresh cilantro.  (Cilantro isn't all that Italian, but I like it, so sue me.) Sprinkle a little red wine vinegar on top of this part. 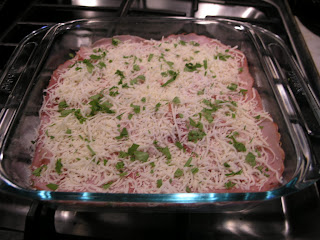 Chop up one small clove of garlic and lightly beat it with two eggs, some salt and pepper. The garlic should be as fine as you can get it and it goes in with the egg so it's easier to spread around instead of getting surprising clumps of garlic in the finished product. 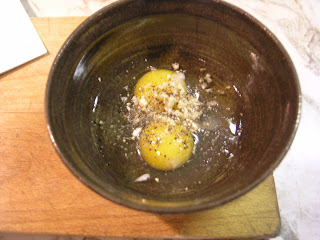 Spread the eggy stuff around as best you can over the top cheese layer. 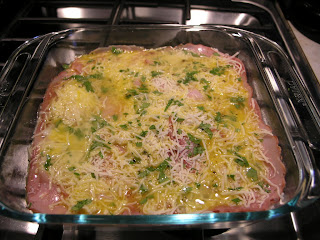 Now cover the top with another layer of the crescent dough. Try to be a little neater with this one since it'll show, but still, the baking part forgives a lot of errors.  Cover the whole thing with foil and bake it for 25 minutes at 375º.  At the end of 25 minutes, uncover it and give it an egg wash over the top. Let some egg leak down around the edges --- it's another thing to hold everything together. (One well-beaten egg with a few teaspoons of water will be more than enough). This is what it should look like with the egg wash. 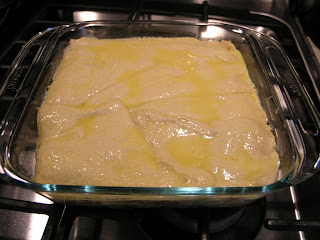 Stick it all back in the oven uncovered.  Bake it for another 20-25 minutes until it looks like this. 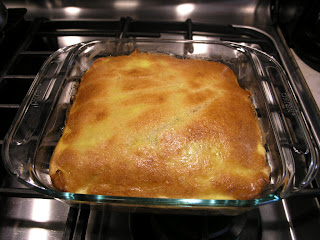 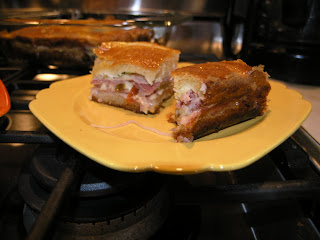 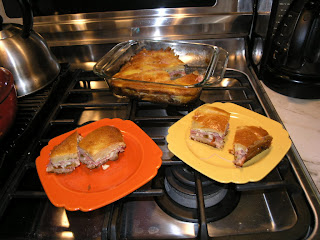 You can mess around with the ingredients and the amounts but you must serve it on Rivera Tableware. (OK, you can serve it on something else, but doesn't it look good on Riviera?)
Posted by Nathan at 11:07 AM

I had to go back and see what I won.

I have to admit the prize seems less exciting after seeing the preview for Salt before Clash Of The Titans. But hey, I was thinking just the other day I could use a water bottle!

Wow that looks really good. I'll take one withouth the peppers. When can deliver by?

Eric, I had a hell of a time finding the post about that. I knew you had won the water bottle, but I couldn't remember what the hell for.

And Matt, Git yer ass into the kitchen. You'll have to come up with something tangy to replace the peppers. (I think there's a Mexican citrus thingy that you can marinate the onions in. That might work.)

That's not how Black Forest Ham looks like in the Black Forest... ;-) (Heh, somebody has to nitpick, no?)

The recipe looks great. I love me some hearty pies. I also suffer from knife envy now...

Well, I got it at the supermarket, not out in the woods. Full disclosure: I didn't grow the garlic or the onions either.

What's the advantage of the butcher style versus one with a sharp pointy tip?

It's more in the style of a Japanese cleaver, so the point is...uh...pointless? The other knife I bought is the same brand, but more of a traditional chef's knife (pointy bit and all).

I know this is an old post, but we had what we now lovingly refer to as "baked Nathan" for supper tonight, and I wanted to pay homage to the creator.