As Long As We're Talking About Jacksonville...

In September 1964, a couple of exciting things happened in a stretch of only a couple of days in Jacksonville.  I was 4-1/2 years old, so you'll kindly excuse me for not having any direct memories of a lot of this.

The first thing that happened was Hurricane Dora.  Believe it or not, Jacksonville really doesn't get many direct hits from Hurricanes.  They usually hit further south, or on the Gulf Coast, or they aim for Northern Georgia and the Carolinas.  On September 10th, 1964, Hurricane Dora slammed into St. Augustine, just 30 miles south of Jacksonville (which counts as a direct hit when you're talking about something the size of a hurricane).  The storm had sustained winds of 125 mph when it made landfall.

Here's the short list of stuff I actually remember.
-There was a really big hickory tree in our back yard barely a foot from our house.  Long before the wind really got going (and knocked out the electricity), us kids had been watching TV in the den.  At some point, the wind got going enough to start moving the tree.  When it started banging into the roofline, we were all evicted from the den.  I don't remember where in the house our parents sent us.  And, no -- it wasn't into the cellar -- we didn't have one.  Having a cellar in Jacksonville is almost unheard of since you'll hit water when you dig about 3' down.
-The storm knocked down the plum tree in our front yard.  This was cause for celebration.  I have no idea why we had a plum tree in the first place, since nobody in the family was particularly fond of plums.  What we did have was the job of picking up rotten fruit from the lawn before Mom would take us to the Jamaican Motor Lodge so we could go swimming.  We were thrilled to be rid of the plum tree.
-Another HUGE tree got blown down across the street.  Before somebody got around to cutting it up and taking it away, we had loads of fun making trails through the branches and leaves on the ground.  The hole where the root ball peeled up was a lot of fun too.

Here's something I'm not sure I knew anything about until I was Googling around for yesterday's post about the Film Biz in Jacksonville.  It turns out that the Beatles played in Jacksonville -- at The Gator Bowl -- on September 11th, 1964.

The concert before Jacksonville had been in Montreal.  When they flew south, the hurricane was just really getting going, so they diverted to Key West.  After the storm had left Jacksonville, they flew in and had a chance to view the destruction from the air.  They had been scheduled to stay at the Hotel George Washington, Jacksonville's finest, but through some glitch, their rooms got canceled. They ended up going there, but not really checking in.  There was a press conference, during which one of the reporters asked them if they always had their meals during media interviews.  They responded that they usually ate in their rooms, but since they didn't have any... 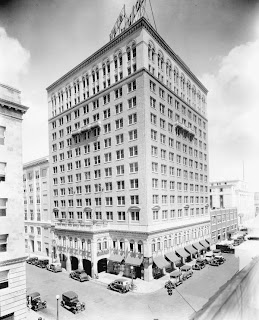 Another tidbit about this concert is that Jacksonville's officials had planned for a segregated concert -- just like everything else in town.  The Beatles said they wouldn't show up unless the show was integrated, regardless of how much money they'd lose in the deal.  The city capitulated and the show went on as scheduled.
The wind was still howling pretty good in the storm's aftermath (45 mph gusts), so Ringo's drumkit had to be nailed to the stage.  While most of Jacksonville was without power for up to a week, The Gator Bowl had undergound cables so the stadium had electricity.  Out of roughly 32,000 tickets sold, only about 23,000 people managed to get to the show.
After the show, having nowhere to stay in town, the band went directly to Imeson Airport and flew out to their next destination.
Posted by Nathan at 3:21 PM