You Put The Lime In The Coconut...


So, I've got a checkup with my doctor this afternoon. I hate to whine (yeah, right), but going to my doctor feels a little like taking on a trek to Everest. 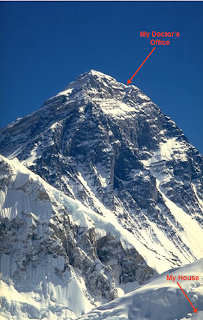 Ya see, I live in Ft. Greene and my doctor's office is in Bay Ridge. Now,  that won't mean much to those of you who aren't intimately familiar with Brooklyn, but it amounts to:

- a fifteen minute walk to Flatbush Avenue. (or a bus ride that takes at least as long and doesn't actually go straight to the subway station due to eternal construction.)
- 30-45 minutes on the subway, depending on how long it takes for a train to show up.
- another 15 minute walk from the subway station to the doctor's office. This walk includes crossing one intersection that's an on-ramp to the Gowanus Expressway and has the distinction of never having the light favor pedestrians and being arranged so that all of the cars are forced to attempt achieving orbit escape velocity by the time they reach the crosswalk.  Crossing here is an adventure!

Another issue I've got with visiting my doctor is that he keeps office hours three afternoons per week and, apparently he just makes every appointment coincide with his proposed arrival time and then he sees patients on a first come-first served basis.  Not to be snotty, but if I show up at 1:00 p.m. for a 2:00 p.m. appointment (to beat the rush, donchaknow), there will already be seven octogenarians in the waiting room ahead of me. (I'll leave the blue-plate special jokes to you guys.)

Once I get in to see my doctor, the appointment will go as follows:
-nurse hooks me up to wires and says "Hmmmm", a lot while the paper gets squiggly lines printed on it.
-nurse fills numerous vials with my blood.
-nurse takes my blood pressure (which I no longer have any of), and in the process pumps the pressure cuff so tight that my left arm goes numb for the next 20 minutes.
-nurse weighs me (shoes on, shoes off, "here, hold this autoclave", "stand on one foot"...makes no difference).

Then, I'll sit there for a little while waiting for the doctor.  While waiting, I'll pick up the book I've brought with me to read on the train and in the waiting room.  Without fail, I'll be reading something vaguely stupid so that when the doctor arrives and asks me what I'm reading, I get to say, "Mmblefshboolbenbxter".  He always proves he's listening by responding, "Oh, I've been meaning to read that one". 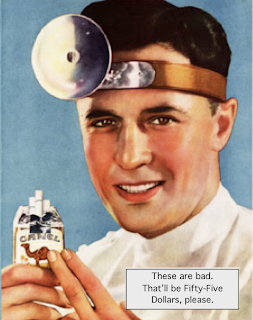 Next, he'll ask how I'm doing.  No matter what I say, this is his cue to ask if I'm still smoking.  When I answer, he places a check mark on my chart which is code to the nurse to charge me for a "Smoking Cessation Consultation", which will show up as a "Wellness Benefit" on my bill and will not be covered by my insurance. 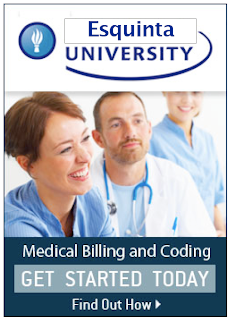 At some point, he'll want to know how the "Film Biz" is going (Sux) and he'll tell me what movies he's seen most recently.  "Uh, no.  I didn't work on that one and regardless, there's still no Academy Award for Best Achievement in Location Scouting."

When it's all over, he'll have recommended a bunch of other tests I should schedule and he'll send me to the nurse to schedule my next attempt to emulate Edmund Hillary.  Then, I'll take the reverse trek back to Ft. Greene.

If you've been keeping track, you'll note that it will have been roughly 4 hours from leaving my front door to arriving back where I started.  This will have involved roughly one hour of walking time and two hazardous crossings of the "Notorious On-Ramp of Death". Unless I've prepped for the trek with two weeks of conditioning and acclimation, I'll be utterly exhausted by the time I get home.

I appreciate your wishes for a speedy recovery from my checkup.
Posted by Nathan at 10:19 AM

I live in Rockland county, 40ish miles north and west. I get to either drive the FDR parking lot or cross town on 34th St. I'll match your on ramp of death and see you one.

It's my understanding that there are now a few medical professionals practicing in Rockland County and that it is no longer necessary to await the itinerant doctor's bi-annual visit for regular health care.

If they can't get privileges at NYU/Bellvue (or moral equivalent), I don't want their fingers in my places.