It's (Probably) This Guy's Fault I Don't Still Live In Jacksonville. 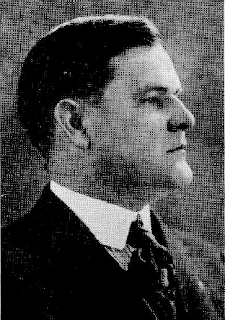 Yeah, him!  Who is he and why am I blaming him for my lack of loyalty to my birthplace?  We'll get to that shortly.
Early in the 20th Century, the Film Industry was based, not in Hollywood, but in NYC.  Due to the existence of winter, they needed a Winter Headquarters and Jacksonville, Fl became "The Winter Film Capitol of the World".  This all started around 1907.  Jacksonville had a lot of things going for it.  The town was recovering from the Fire of 1901 which had destroyed much of the place.  Transportation by rail and by sea were both excellent.  Labor was cheap.  Locations were varied.  And sunlight, in an era when movie lighting was still primitive, was plentiful.  Kalem Studios was the first to open a permanent studio in Jacksonville in 1908.  They were quickly followed by others until Jacksonville boasted more than 30 silent film studios.  By 1916, the Jacksonville telephone directory listed over 100 motion picture studios.  Oliver Hardy started his motion picture career in Jacksonville in 1914.  The first movie made in Technicolor and the first feature-length color movie produced in the United States, The Gulf Between, was also filmed on location in Jacksonville in 1917.
During that time, Jacksonville also became the home of "Race Movies", films intended for black audiences and primarily crewed by African-Americans as well.  Richard Norman, a white entrepreneur, was instrumental in this enterprise, and in 1920, opened Norman Laboratories, specializing in "talking picture equipment" and feature film production.
Had Jacksonville continued it's dominance in the U.S. Film Industry, I would have grown up amidst it and probably returned there after college -- the most logical place to pursue my career.
However, eventually, Jacksonville's more conservative citizens grew tired of car chases in the downtown streets, simulated bank robberies and the occasional "riot" scene.  It was also, apparently, a habit of early producers to get free extras in the background of their scenes by setting off fire alarms and shooting while people came out into the streets to see what was going on.  And that's where we get back to that guy at the top of the post.
That guy is John W. Martin.  In 1917, he ran for Mayor of Jacksonville, mostly on a platform to "tame the motion picture industry".  The bastard won and pretty much chased the industry out of town.  (In deference to the guy, he was Governor of the state from 1925 to 1929, during which time, he pushed through state funded public schools and free textbooks for students through sixth grade.  He also advanced tourism and the state highway system.)  But the bastard chased my chosen profession to the Left Coast.
Bastard!
Posted by Nathan at 6:13 PM

I had no idea. Thank you for writing this one, Nathan!

Gleatoxi: the planet Sophie retired to after her many adventures.

Well, if you have a hankering to come back South...Screen Gems just inked a deal with the City of Atlanta to convert the old Lakewood Fairgrounds into a full-fledged Hollywood style studio lot!

...city council welcomed the newest plan, approving a multi-million dollar, 50-year lease for the Lakewood Fairgrounds to be used as film studios and sound stages. EUE/Screen Gems will pay $250,000 per year in rent until it jumps to $600,000 per year in 10 years.

Apparently the Lakewood Amphitheatre (I worked there for 10 summers) and multi-school football stadium will remain.

Should be interesting, they're always shooting movies here anyhow.

I knew about Jacksonville being big in the film biz early in the 1900's but I didn't know about the mayor who ran to kick it out. I stumbled across that little factoid doing some random surfing.

The stuff they forget to tell you in school!

I'm sure having a backlot with studios will help things along there, but the fact is---as far as Hollywood is concerned, there are "studio jobs"...meaning stuff shot at home in Hollywood -- and everything else is considered "distant location". We're being reminded of that in NY right now since nothing is going on right now.

I've blogged about the Movie-TV Unit of the NYPD before. I ran into one of the cops I know from the Unit last week and he told me that they've been assigning very few of the cops to shoots (because there are so few going on right now), and the rest of the Unit keeps getting loaned out the Manhattan Traffic.