I've been somewhat remiss in my bloggerly duties lately, so here are a few things going on that I thought I would bring to your attention.  I don't actually have any earth-shaking opinions about these things; they've just caught my interest and I thought I should toss them out there for your consideration, (i.e. since we're being all Latin-y and stuff, Res ipsa loquitur..."it speaks for itself"). 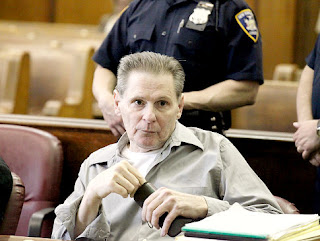 First up, I'd like you to meet Robert Camarano.  He's a 62 year old guy who has spent a fair percentage of his life in prison and is now on trial for the murder of Michelle Hyams.  At the time of his arrest, he was found straddling her blood-soaked body; alternately attempting CPR and babbling incoherently.  This would all just be your normal run of the mill, tragic murder story except for the fact that Mr. Camarano has asserted his right to defend himself in his trial.

Things aren't going great for him so far.  The Judge in the case, Justice Carol Berkman has repeatedly tried to convince him he should have competent representation.  I won't try to guess whether the Judge is just trying to make sure he gets a fair trial or if she's trying to save the State a costly appeal (Pro Se cases have a habit of being overturned due to the incompetence of the Defense "Attorney"), but she hasn't been pulling any punches.  Prior to jury selection, Judge Carol Berkman made another effort at convincing him he was making a big mistake, saying,

And things haven't really gotten any better.  His comments during jury selection ranged from improper to bizarre. Interviewing one prospective juror who captains a fishing boat (presumably somewhere here in the northeast), he tried to elicit sympathy by telling the man he was "terribly sorry about the oil spill".  The judge regularly interrupted him when he strayed from allowable statements and questions.

During opening statements, he revealed his strategy: Despite multiple stab wounds, Ms. Hyams wasn't murdered at all; she took her own life with pills and booze -- which the authorities are apparently hiding in an attempt to frame him.

I'll be following this one.

Second up: The Local, reports that Brooklyn now has a font of its own.  The font, called Brownstone, was created by a South American design firm called Sudtipos after one of the firm's principals took a trip to New York and was inspired by the brownstone neighborhood of Park Slope. 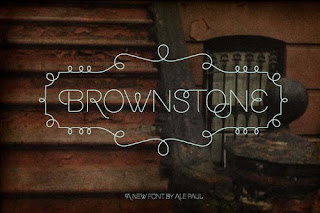 While I have nothing against this font (and I suppose a designer is welcome to call his creation anything he likes as long as no-one else already has dibs on the name), I don't see anything particularly evocative of brownstone Brooklyn in this font.  There's something a lot more Art Nouveau about this font to my eyes.  And while the time period may be right, (late 1800's into 1915 or so), I just don't imagine all of that fine filigree when I think of Brooklyn.
This is what Brooklyn (and therefore Brownstone) should look like:

And all of you in L.A. can just keep your mouths shut.  You stole the lettering when you stole the team and I don't want to hear squat from any of you until you start keeping more asses in the stadium than taillights on the 101 during the 9th inning.
And last of all:  The Cannes Film Festival seems to have put Roman Polanski back into the headlines.  A while back, various keepers of Film Blogs were discussing whether or not they'd work for Polanski and expanding the subject to include whether or not bad behavior by him (or others) carried some moral obligation to turn down work with them.  I stayed out of it for a couple of reasons -- Polanski isn't likely to be making any movies in the NY area any time soon and, with others, I figured I didn't need to think about it until (or unless), someone who fit the bill actually offered me a job.  (One blogger went particularly ballistic about Mel Gibson during that same time period.  I sorta, kinda followed the Gibson debacle(s), but not very closely.  If Mel comes to NY to shoot a movie and his Producers call me in for an interview, I'll have to do some research and make up my own mind just how worthy he is of my own personal, somewhat pointless boycott.  I honestly, just haven't made up my mind if he made some drunken but forgivable indiscretion or if he's as despicable as some people have decided.  I didn't see Edge of Darkness, but that's because it looked like a crappy movie, not because I was making sure I didn't support Gibson's career.  And Braveheart is still one of my favorite movies.  Call me willfully ignorant.  I'll think about it when it matters.)
Anyway, back to Roman Polanski and his supporters.  Deus Ex Malcontent continues to have, what I think, is the best take on that whole sordid affair. Despite all of his apologists and all of their attempts to muddy the waters, the fact remains that Polanski was convicted of a crime and he skipped the country in order to avoid the sentence that went along with the conviction.  Game. Set. Match.  The rest of the details are irrelevant and/or self-serving and don't make any difference.  He could have availed himself of appeals and, if there was the misconduct his supporters claim, there were civil courts at his disposal.  Not to mention, he'd have been free long ago if he'd gone to jail.
But there is a vocal group of idiots who make their central point the idea that Polanski is an Artiste and that Artistes should be held to a different standard.  They believe it's a worse crime to deprive the world of the Artistes' productive output than it is to let a little rape slide by.  And besides...so much time has gone by...can't we all just get along?  (I hesitate to invoke Godwin's Law, but are there really that many people who want to forgive Nazi War Criminals just because they somehow managed to avoid prosecution for decades?)
And Woody Allen has signed on with the Polanski apologists.  I'll admit that I've been more than a little queasy about Woody Allen ever since he and Soon-Yi hooked up, but that wasn't offputting enough on it's own to make me consider boycotting his films or turning down work (if it was ever offered).  There's no question that the episode was tawdry as all git-out, but, I suppose it wasn't a deal breaker for me.  (Sue me.)  But this episode of Allen's rationale is pretty reprehensible and delusional.  Polanski has continued his career -- albeit in Europe, not Hollywood.  He's wealthy, has a family and his exile is in a lovely Chateau.  He hasn't paid shit and his "embarrassment" is his own doing.
I realize that Woody has had a successful career since long before I was an embryo...a career that he's somehow managed to maintain without any help at all from me.  I also realize that Woody seems to have moved on from his "Manhattan" period and entered a "European" phase of creativity, so, the odds of his people calling me are even less likely than they were a few years ago.  But I think I can safely say that I won't be soliciting any work from him and I won't be going in for an interview if I get a call for one of his projects.
And as long as I'm being all "taking a brave stand" and stuff, I'm also announcing that I won't be taking any jobs on "snuff films" or KKK Promotional Videos.  I am however, willing to work on Sarah Palin campaign commercials, but that's just because I know a few dozen ways to completely run a day of production off the rails without any evidence pointing back to me!
Posted by Nathan at 1:58 PM

Well, obviously Michelle Hyams stabbed herself repeatedly as part of her plan to take her life and then conspire with the authorities to frame Mr. Camarano.

You may be confusing Michelle Hyams with Orly Taitz. That plan sounds way more up her alley.

Maybe we could ship Mr. Camarano to act as Orly's Assistant Secretary of State in California.

You have a rather more optimistic view of Camarano's chances at trial than I do. Then again, I'm not personally aware of anything in California's laws that precludes a felon serving time in another state from serving in their government at the same time.

Me, I went into retirement rather than work for Fox, so did a couple of friends of mine.

metsch not quite a mensch