Brooklyn Coal Chutes And A Peek At Some Other Urban Archeology.

I've mentioned that my neighborhood was mostly built in the late 19th and early 20th centuries. At the time, homes were heated by coal furnaces.  And, of course, there had to be a way to make coal deliveries. Ladies and Gentlemen...I give you the Coal Chute!  Or, actually, coal chute covers.

These were about 10"-12" in diameter; too small for a burglar to crawl into, but large enough to dump a load of coal into your basement. They would sit on the sidewalk outside of the home's front stoop, presumably unlocked and easily reached from the street like the one in this picture. 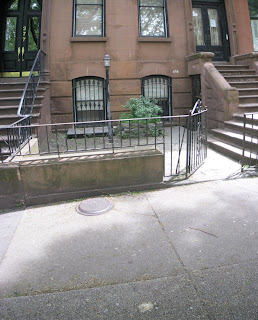 In most instances, they've actually been covered over by new sidewalks, leaving no evidence, but you'll also see a bunch of concrete filled openings all over my neighborhood. 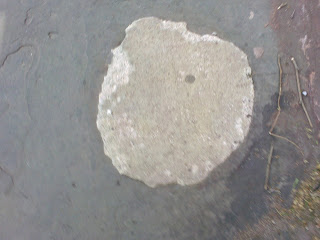 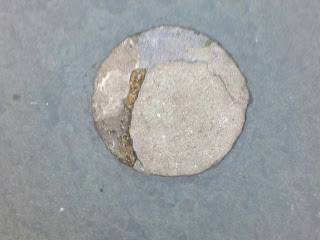 But, here and there, you'll see the original coal chute covers still there on the sidewalks.  Most of them were fairly unique...sometimes works of art in their own right.  Here are a few found walking around my immediate neighborhood. 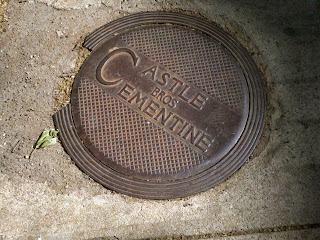 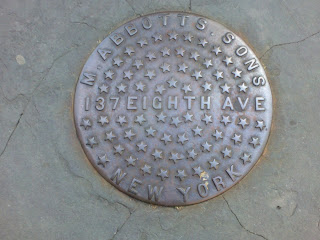 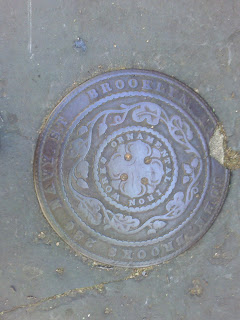 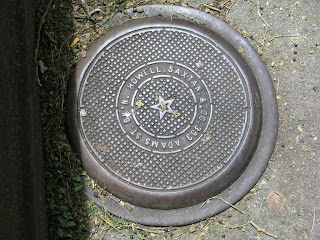 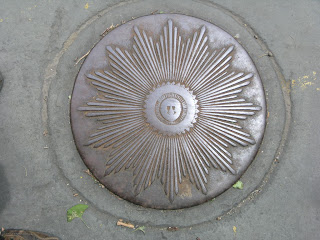 Another remnant you'll run across occasionally are old Carriage Mounting Blocks...or at least their remnants.  These were the stone blocks set at the curb so fashionable ladies and gentlemen could easily step from their carriages (or dismount from horses) to go visiting.
Here's one I found online. 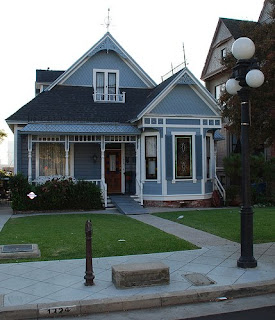 And here's an iron bootscraper which was also a common amenity. 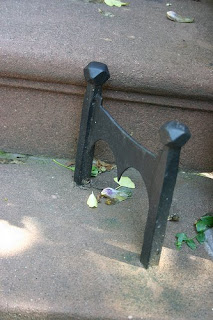 I know of a couple of them in Brooklyn Heights that are still intact, but here's what I ran across walking my 'hood today.  This is a spot where one used to be and, apparently just got knocked down to sidewalk level. 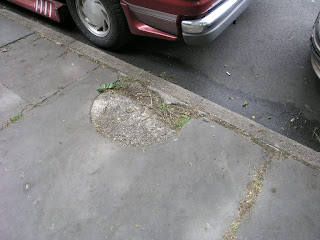 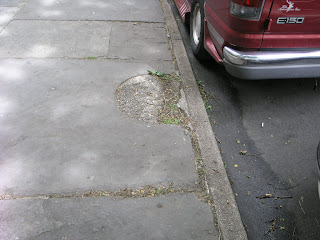 And here, someone has moved one into their front "yard" as an ornamental feature. 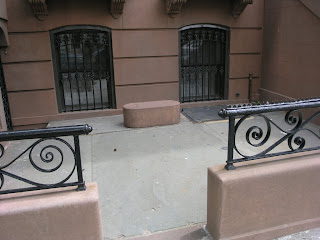 BTW, most of the coal chutes have been sealed up to the point where the homeowner doesn't need to worry about rain leaking into their cellars.  Since I haven't seen any coal delivery trucks (or wagons), trundling around the neighborhood in recent memory, I doubt mistaken coal deliveries are much of a concern.  On the other hand, at least once every winter, I'll see a story about some fuel delivery company pumping fuel oil into a house that's been converted to gas for their furnace.  For some reason, they seem to leave the fill-pipe accessible, but instead of the oil going into a tank, it just fills up their basement.
Posted by Nathan at 5:07 PM

I also love old buildings, of which there are a few--but not many--around here.

The last house we rented originally had a coal furnace, except the coal dumping area was more akin to the entrance to a tornado cellar.

Most houses here also have the hatch-cover/tornado cellar type entrance. Those are kept padlocked (inside and out), so they never would have been great for coal delivery unless the servants were home.

Sadly, our servants have been missing ever since we got here.

I like the last coal cover in particular. Has an Art Deco flair.

I am also fascinated by coal chute covers and would love to check out the ones in your neighborhood/photos.
Can you tell me the location of those covers?

snoh: They're on the sidewalks. Does that help?

I honestly don't remember precisely where most of these were...I was just wandering around the neighborhood. If I remember correctly, I was walking up and down the streets from South Elliot to Vanderbilt Ave. between Dekalb and Lafayette Avenues. (That's all near Ft. Greene Park, Brooklyn)