An Open Letter To President Obama.

Barry, you don't mind if I call you Barry, do you?  Barry...I know you've been having a rough time of it lately.  The economy is still in the shitter, there's a bunch of people who are still convinced you're actually an alien love-child (and they have copies of your Venusian Birth Certificate to prove it!), there are a bunch of state-wide elections coming up and your party's gonna have a tough go of it in some places.

And then there's that oil spill.  There's been a lot in the news lately bitching at you for not "showing some emotion" about the spill.  There are people screaming for you to "take over" and push BP out of the way since they've demonstrated no ability to "plug the damned hole".  And, now there's a poll out showing that more people are dissatisfied with your response to the oil spill than were dissatisfied with Bush's response to Hurricane Katrina. (Personally, I find that one a little bizarre, although it may be explained by the fact that when they took the Katrina poll, the pollsters had to make do with speaking to people in Nebraska, since most of the Katrina victims didn't have phones or addresses two weeks after the hurricane.)

And, I'll be honest here. Your appearance on that beach in Louisiana probably didn't do you all that much more good than Bush's heroic 'fly-by' in Air Force One over the disaster zone. 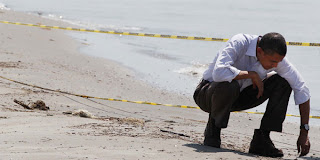 Note to your 'image' makers: When the President visits the coast to personally view the calamitous effects of an oil spill, it is imperative that there be some oil visible in the shots.  It's just a suggestion, but that shot might have been done at Coney Island for all I could tell.
Now, I know you're probably a little frustrated and I wouldn't blame you for having brief moments of just sitting there thinking, "Can't a guy catch a fucking break?"  But I strongly urge you to resist the temptation to make any further appearances designed to show you as a 'regular guy' who needs to vent like the rest of us.  Yeah, I'm talking about your interview with Matt Lauer the other day. Hey, you were all Presidential and stuff through most of it, even though I'll admit that there were a few spots where I wasn't all that thrilled with your responses.  But what really annoyed and disappointed me was that part that everyone else is picking up on...you, know...the sound bite where you talk about finding out who's asses to kick. (It's about 10 minutes in.)

Barry, If I was interested in 'folksy' talk; all droppin' yer 'g's and stuff, and hearing talk about ass-kickin', I'd have voted to have that Tina Fey Lookalike to be one heartbeat from the Oval Office. (You know the one I mean.)  Not only did it feel contrived, it wasn't the point at the moment.  Right now the point is to cap the leak by whatever means anyone can come up with.  Right now, the point is to contain and collect as much of the oil as humanly possible before it washes up on more shores.  Right now, the point is to clean up as much shoreline as quickly as possible where the oil has reached the coastline.  And as much as people are screaming for you to roll up your sleeves and get more directly involved, I don't think anyone expects to see you out there dressed in a paper suit with a respirator on scooping tarballs into trashbags.  (On the other hand, while I know that our military is already over-extended, aren't there any military assets you could send in -- letting BP know that they'll be seeing a rather large invoice in the near future?)

There will be plenty of time to kick ass after the oil stops flowing and the clean-up is in full swing.  And while I don't doubt there are some appropriate targets in the government who need to be identified, (both present and past tense), I'm pretty sure we already know that BP will be at Ground Zero for the Mother-of-All-Proctological- Exams. (And it's probably not too early to set up a new branch of the Attorney General's Office to be solely tasked with making sure that BP CEO, Tony Heyward's pronouncement that they will pay "all legitimate claims" doesn't translate into "all claims that can dedicate 15 years to court battles proving they're legitimate.)

But back to your appearance and demeanor, Barry.  We know you are familiar with some curse words.  With Rahm Emanuel just down the hall, how could it be otherwise? (Remember that time you spoke at that fundraising roast of him and you made that joke about how when part of his middle finger got cut off, he was effectively rendered mute?  That was funny.)  But, you didn't get elected for your folksy ways or your 'regular guy' persona. 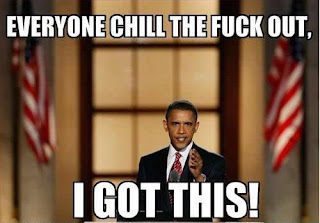 He's the one I voted for.  And part of that was because you only projected that attitude instead of childishly putting voice to it.  I don't recall any Roosevelt speeches where he mentioned shoving the Wermacht up Hitler's ass.  I wouldn't be the least bit surprised if there's a record of him saying something like that in private, but nobody expected him to get all petulant in public.
If you feel the need to establish some street cred by talking tough, why don't you call in one of BP's Government-Affairs Stooges (not their CEO; he should be frozen out completely),and read him the riot act right there in the Oval Office.  Then arrange for a strategic leak of some of the meeting's juicier moments. In the meantime, stick with calm.  Stick with deliberative, smart and Presidential.  You have enough surrogates who can play the public face of outrage.  That's why they get the big bucks.
Posted by Nathan at 3:30 PM