Don't Go Back To Rockville.

Once again, I find myself being totally suggestible and letting Eric decide what I should be posting about.

The short story is that back in '91, I got a call to go work* on Paradise in Charleston, SC.  I was in the process of moving to Los Angeles at the time and that phone call came about 5 hours after I had arrived at my brother's house in Orange County after spending a week driving from NY.  So, I packed and got on a plane. The movie stars Don Johnson, Melanie Griffith, Thora Birch (pre-disaffected Kevin Spacey progeny), and Elijah Wood (pre-bein' a Hobbit)!

Saying we shot the movie in Charleston is a little deceiving.  We shot in a lot of places around Charleston, but every location we shot at seemed like it was miles from Charleston. And we were at one of those locations for a buttload of days out of the shooting schedule.  I know it was only about a 40 minute drive, but it got to the point where it seemed interminable. 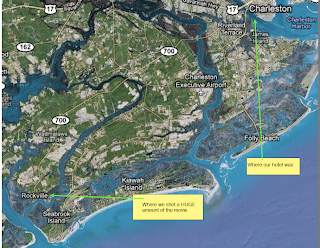 So, the caterers decided we had a theme song.  Every day at breakfast, you'd hear this tune blaring out of the mobile kitchen.
There are two things that I remember most about making that drive over and over again.  First, there was the morning that I was just ahead of our Craft Service guy on the two lane road leading to set.  It was foggy as hell and both of us were probably driving at least 20 mph over the speed limit.  About 2 miles before our destination there was a place where you had to take a fork in the road, and as Crafty took the fork, I saw a cops lights come on in my rear-view and pull him over.  Since I knew many of the County Cops by then (we'd hire them for security and stuff), I turned around and went back to see if I could rescue him.  When I got back, he said he wasn't in trouble at all.  It seemed he had an arrangement that whatever cop was on duty in that area would pull him over every morning for a cup of coffee and a bagel.
The other thing was that our producer managed to amass something like 15 speeding tickets.  At one point, he asked me to talk to the Sheriff and see if we couldn't get them "fixed".  About a week later, the Sheriff got back to me and let me know that he could get all but one ticket thrown out on the condition that we get a driver for the producer -- it seems he didn't want the guy driving in his county any more. (In fairness, I have the distinct memory of the producer arriving one morning with exploded feathers and a bird's claw sticking out of the front grill of his car.)
Anyway, I thanked him profusely and asked, just out of curiosity, why he couldn't get the last ticket excused.  In answer, he asked me whether or not it was possible that our producer had called his officer a cocksucker.  I conceded that he might have used such intemperate language -- if he'd been in a particularly good mood that day.
I'll leave you with Elijah being interviewed on the set of that movie.  He was young.
__________________________________________
*Please note that I said "work on", not "manage the locations".  I received a Location Manager credit (with my last name misspelled), but frankly, I think that was kind of generous.  By my standards, I was an Assistant Location Manager on the movie.
Posted by Nathan at 8:17 PM

"Don't Go Back To Rockville" is a helluva good song. Like just about everything those guys did in those days.

If this is being a bad influence, who wants to be a good one?

It is pretty excellent, isn't it? And, while the original version was the one blaring from the kitchen, I may like this one better. I never heard it before I went looking for choices on YouTube.